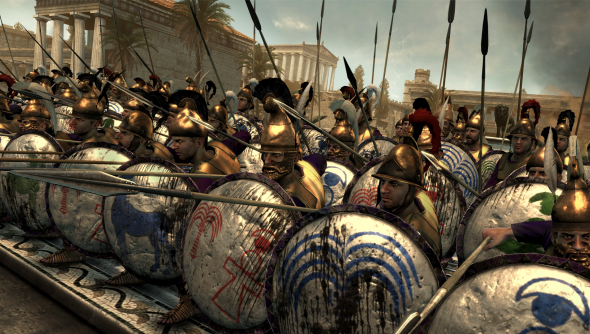 The Carthaginians, as you may well know, hail from north Africa and Carthage itself is cited in modern-day Tunisia. Nowadays it might be a popular tourist destination, but in Rome 2 it’s a practical land of traders and mercenaries. If you wish, it’s also yours to command. “As a playable faction, Carthage benefits from its mastery of the waves and its heritage as a great trading nation,” says the Rome 2 wiki. “As a democracy, it also enjoys an improved level of population happiness. The player also has the choice to play as one of three major political powers, each of which confers further military, economic and cultural benefits.”

It’s core unit is the Sacred Band, those fellows pictured in the header image above, and they’re also big fans of elephants, just like we are. A nation of skilled sailors, their ships are both speedy and deadly, so they’re likely to be a dangerous nation to cross. Still, my experience is that a good catapult solves pretty much every problem.

If, like me, you’re a little bit of a Classicist, you’ll remember Carthage as the home of Dido. If not, you might think I’m talking about the most middle-of-the-road pop singer in human history. Not so. One thing the Classical world certainly wasn’t was middle-of-the-road.