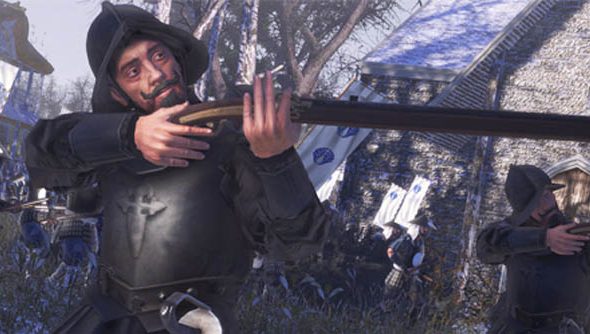 The latest Total War: Shogun 2 DLC breaks with tradition and takes things away from you, sort of. Bundled in with the DLC, that adds a number of new units, is a patch that reduces the install size of the game by 6.6GB (which, considering it’s original 19.6GB, is a pretty hefty chunk).

Further details of what the DLC brings are below.

Posted up over on the Total War wiki are the full patch notes and new shiny things coming from the DLC. But why click there when you can see them here too?:

Here’s a full breakdown of what’s included in the DLC:

Armed with matchlock rifles and swords, clad in iron breastplates and Spanish Morion helmets, the Tercos can lay down withering hails of fire, and give a solid performance in melee.

Mounted troops armed with the fearsome, fluted Donderbuss rifle – the forerunner of the modern shotgun. These ranged units can be swiftly positioned to gouge at an enemy’s flanks, or punch the wind out of his cavalry charges before they even arrive.

Armed with matchlock arquebuses to unleash massed volleys of long-range gunfire upon the enemy, these units fight with religious fervour, which increases the accuracy of their fire and enables them to reload at a faster rate than standard Matchlock Ashigaru.

With their accurate volleys of rifle-fire, Otomo Matchlock Samurai are ideal at weakening enemy units before a charge. Benefitting from their Samurai training, they fire with greater accuracy and reload more swiftly than their Ashigaru brethren.

A very light and fast ship carrying a small detachment of musket-armed soldiers whose Christian fervour and familiarity with matchlocks enables them to shoot more accurately and reload at a faster rate than standard Matchclock-bearing Kobaya. “The following tweaks have been made to unit balancing based on community feedback.

The optimisation patch for Shogun 2 brings with it a host of key improvements that we’ve made to the core Shogun 2 experience since its release last year. If you own Shogun 2 and Fall of the Samurai, this patch will reduce the hard-drive footprint of your install by 6.6gb (22.4%). If you just own one, you’ll still see an install size reduction.

A 20-40% reduction in initial load times, dependent on machine spec, graphics settings and OS. This primarily boosts game boot-up time.A series of bugfixes and other optimisation tweaks.The patch will deploy for all users, whether they purchase the DLC or not, at the same time the Otomo clan is released.”