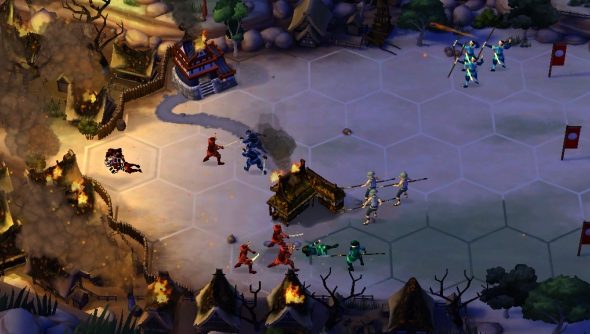 There’s a law in the Games Journalist Handbook (7th Edition) mandating that all mobile strategy games must be compared to either Civilization: Revolution or Advance Wars. Or both. Total War Battles, notably, is not comparable to either of them – but, as you’ll discover, it’s not particularly like Total War either. Total War: Battles focuses on a small aspect of the Total War games, the battles. It has a little of Civilization Revolution’s superb cleanness of presentation and something of Advance Wars relentless battles, but stylistically TWB is more comparable to the Age of Empires series. It’s a hex-based wargame set in an oversaturated Japanese world, with a story-driven campaign.

Total War: Battles focuses on a small aspect of the Total War games, the battles. It has a little of Civilization Revolution’s superb cleanness of presentation and something of Advance Wars relentless battles, but stylistically TWB is more comparable to the Age of Empires series. It’s a hex-based wargame set in an oversaturated Japanese world, with a story-driven campaign.
Players take on the part of a 16th century Japanese Daimyo battling the Takeda and Kisami clans, seeking to revenge his father. This does tie in with Total War: Shogun II, to the most minor degree, as it’s set at the end of the Sengoku Jidai “warring states” era, but beyond that there’s no crossover. The campaign is surprisingly well-presented, well-written and well-acted for an iOS title. Complete it and you get a download code for a hidden faction in Total War: Shogun II.


Mechanically, it’s modelled after the popular tower battle games, similar to Plants Versus Zombies. Players create units that can only attack along certain paths (there are a maximum of five in TW:B), and are mostly automatic in their progress and fighting. You can direct them or stop them but there’s a cooldown to lane changing and, given the rock-paper-scissor aspect of the units, mistakes tend to be fatal to any misplaced unit. As well as any units it was shielding or buildings behind them. It’s challenging to get your attack or defence structures right, but rewarding when a plan comes together.
On top of that, there’s a classic base-building mechanic, which the developers have cunningly turned into a hidden puzzle game. Within the limited space of a base, each building has a different footprint, and needs access to different fixed resources. Many levels have you struggling to ensure that the production buildings chain together and tessellate properly, whilst also fending off waves of enemies and perhaps dispatching an automated attack force yourself. Indeed, some of the bonus levels.
Multiplayer is two-player, same screen. Each player gets is given the same units and power-ups on three mostly symmetrical maps and the first to kill the other’s general wins. It’s quick to start and easy to pick up, and an excellent addition to the game.
Like many iOS titles, the game features micropayments; controversially, they’re for in-game XP, with 99c/69p buying you the equivalent of one bonus level’s XP. Admittedly, you’re not competing against anyone else, so the only person you’re cheating is yourself and good players won’t need it… but still, it feels a little dirty.
This has about as much to do with Total War as the Greek Economy has with the Euro. If we hadn’t been told this was a Total War game, we wouldn’t have known. Despite this, it’s a solid strategy title with good, simple multiplayer, and mind-teasing twists that freshen up its strategy mechanic.
{"schema":{"page":{"content":{"headline":"Total War on your phone – how does it compare?","type":"news"},"user":{"loginstatus":false}}}}