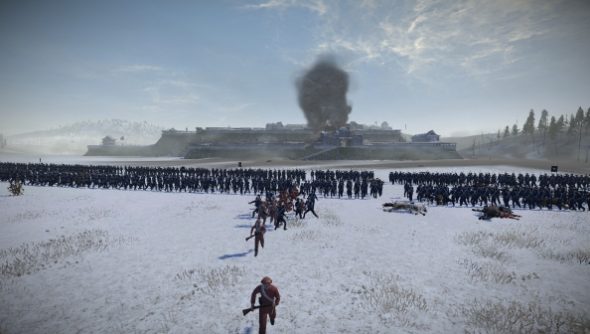 We know that Creative Assembly, the team behind Total War, want to do something different. Last time I spoke to them, they told me that one of their dream games was based entirely around the MesoAmerican (Olmec, Mayan, Aztec civilizations): “I’ve seriously suggested that if we ever do Mesoamerica, you don’t get another turn unless you sacrifice some people…” said Head Writer Mike Brunton; “It’s basically a whole bunch of people dressed like Leatherface out of Texas Chainsaw Massacre, coming after you with broken bottles, coked out of their heads on chocolate, hyped up with the sugar rush…”

That made us think; what do we want from Total War? What needs fixing? What needs changing? Here are our suggestions.

We’d definitely like a sandbox mode, where you can get to set the variables. Think about the Galactic Civilisations II campaign creation menu, where you can set realm size, starting resources, starting armies, resource abundance and so on, and replicate that. You choose your own objectives, whether that’s reaching the highest level of development, or achieving a diplomatic victory, and then attempt to achieve them.By also choosing the conflict size, hopefully we wouldn’t end up with so many half-finished campaigns – I can’t remember having finished one since Rome: Total War. I’d say there’s something unsatisfying about that, the fact the game doesn’t maintain, and hasn’t maintained, drive for the gamers right through to the end.

Fitting with that sandbox mode would be a randomly generated infinite earth, with faction’s income and resources dependent on the exact amount of territory they control. Then as you get more powerful and your empire expands, matchingly powerful enemies could always be generated beyond the edge of the map. Obviously, our first desire is for Total War: Earth but there are a lot of other settings which are tighter and more interesting – specifically settings that aren’t pure simulations, but skate closer to the Alpha Centauri world of “What If?” speculative fiction or different old world views. Similarly, there are areas of history untouched by their campaigns, like Ancient Egypt, Assyria or India, which are the perfect setting.Other themes that would segue with their interests include the various mythologies of the world. For example, a Total War: Viking fits with their research for Viking: Battle for Asgard and could feature a slow expansion as you battle both the other Viking tribes, the raiding shores of the Known World, and most likely the mythological enemies of the Vikings. As the Viking known world extended not just to Scandinavia, North-Western Russia, and Northern Europe, but also to Newfoundland, Greenland and, through a bizarre overland route through Russia, the Byzantine Empire and Araby, you’d have a strange-shaped world.Your leader would lose honour through not conquering and battling, forestalling a game of turtling, and the lack of development would mean that new equipment and technologies could only be gained by looting and trade. The endgame would involve Ragnarok; that is, a final battle on the side of either the gods or the ice giants, where you simply can’t win, but get to see how long your built-up swag and hardcore troops can last against the mythological monsters of the world’s end. Naval warfare in Total War has improved massively, but there’s one gaping hole: naval units are invisible in land battles. That seems strange. There’s no way to defend against hostile landings, or use rivers to attack the inside a landmass.We also think Total War needs to deal with more extreme weather,replicating situations whereKublai Khan’s fleet was lost off the coast of Japan. Or how the Spanish Armada suffered when forced to route around the top edge of Scotland.

Better use of agents
Agents are expensive to use, hard to train up, and extremely vulnerable to other agents. Having a variety of agent skill levels from the start and more outcomes to hostile agent actions would be good; losing these guys should be a blow, but not so huge it affects your entire tactics.

The tendency for your faction to become supremely powerful and have an easy victory (“the Rollercoaster effect”) made the game extremely boring. This was changed by Realm Divide in Shogun 2, but mostly balanced for by AI cheating – even on the easiest mode, if you rebelled against your faction not a single vassal or ally would stand with you, no matter how overpowering your local force was or how long term your relationship – which is just plain unrealistic. Similarly, in Shogun II, the hardest difficulty seemed to be established by unrelenting hostility on the part of AI factions. None recognised the benefits of peace with their larger neighbours, even long-term allies, and would hurl their entire armies at human enemies whilst leaving themselves undefended. There have to be better ways of establishing difficulty or subterfuge.

The current diplomacy system feels like it was designed for non-existent multiplayer. This isn’t unique to Total War; most strategy games have a rudimentary diplomacy system. At most difficulty levels, it simply doesn’t work or works in a strange fashion. Allies side with you or abandon you when it’s not in their interest, negotiating over simple alterations in otherwise agreeable treaties can result in a contemptous dismissal, and the concept of vassals just doesn’t seem to work. The possibility of something like the Louisiana purchase doesn’t ever seem likely to come up – nations seem to be set up to consider territory as infinitely valuable and won’t part with it for anything. Similarly, countries can operate with a deficit and have been able to since independent banks were established in 17th century Europe.

Sure Paradox’s medieval Japan simulaton Sengoku was broken in lots of interesting ways, but the way it created a plot system and betrayal system really captured the feeling of internecine warfare and internal politics of the era. To generate something similar for Total War and have an explicit system of trustworthiness would work well with the careful character-building that the Creative Assembly put into their characters.

The Total War: Shogun II multiplayer is a real step forward, in all its many and varied forms. We’d challenge Creative, though, to make a multiplayer campaign without any drop-in battles. We’d want them to have enough confidence in that simulation that it can be a game in itself. If you can’t enjoy it by itself whilst playing with friends, why do you think people will enjoy it? Integrate these into the campaign, as they’re the most underplayed part of the game – I often forget they exist at all. Perhaps, learning from the superb but ancient Warhammer: Shadow of the Horned Rat and Dark Omens games, have a pop-up on each year where there was a famous battle (or perhaps when they discover the site of a famous battle), giving players the option, right then, to zoom to the locations of these battles and take the part of either side, and give them appropriate, special rewards for winning and/or taking part.For example, if it’s 1644 or I’ve just conquered Yorkshire, let me take the side of the Cavaliers or Roundheads at Marston Moor. If I win, depending on the side reward me with either a unit of Prince Rupert’s Cavaliers (devastating cavalry but uncontrollable after a charge) or Cromwell’s Ironsides (well-armoured cavalry but never follow up on combat victories). Touches like these bring that history to life and colour to the campaign.

As a counter-point to the Infinite and Sandbox modes, give us proper story modes again, like they did with Napoleon. They’ve done it with Total War: Battles, so they’ve proved they’re capable of it, and they’ve employed many superb writers over the years; but they’ve always stuck to a fairly unfancy way of doing it. Go fancy. Go CGI, go acting. Give me Ghengis Khan brooding over my failures on a throne of skulls or Caesar feigning heistation at the Rubicon.