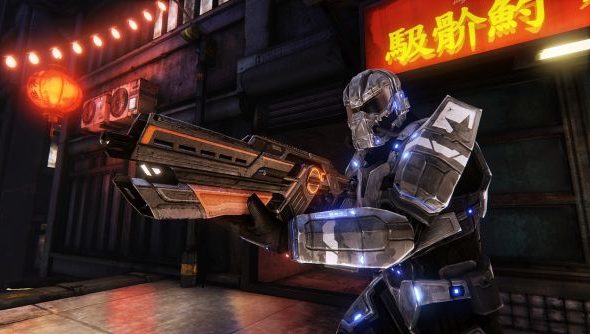 Toxikk is a classic FPS that’s going back to the roots of the arena shooter, if their debut trailer is anything to go by. It’s taking a stance on equality by doing away with classes, leveling systems and weapon upgrades, and also getting rid of cover systems, automatic health regen and iron sight aiming (IAS).

What you will get is double jumps, booster pick-ups, infinite weapon capacity and a multitude of multiplayer maps that promote a variety of playstyles. Some of the bigger maps even contain vehicles wreak havoc on the battlefield. Toxikk has also shunned free-to-play, saying that it “contradict[s] the idea of classic arena FPS gaming” with paid for unlocks and upgrades.

It’s immediately apparent that Toxikk takes inspiration from the likes of Unreal Tournament and Quake.

“Designed as a spiritual successor to the fast paced arena shooters of the late 90s and early 2ks.” says their website. “There is no leveling, no skill-trees, no perks, no cover systems, no classes, no configurable weapons and no iron sight aiming.

“Instead you get fast and precise movement (with deeply configurable mouse controls), double jumps, dodge jumps, booster pick-ups, nine iconic weapons to be carried around simultaneously, secondary fire modes for every weapon, vehicular game modes, jump pads, health-packs, lots of vertical gameplay, optional mutators (incl. instagib) and everything else that made these kind of games so addictive.”

Player equality is one of the main focus points of the game, which is also why Toxikk isn’t going with the popular free-to-play route. “We believe that ‘classic Arena-FPS’ and ‘Free-to-Play’ (F2P) don’t go well together.” stated Reakktor studios. ”A true arena FPS requires all player characters to have equal stats and the availability of all weapons to everyone. Always! The skill of a player should be the only deciding factor about victory or defeat.”

Maps will come in two varients: classic and massive. Classic will feature eight players inside small-medium sized maps. Massive maps on the other hand can contain up to sixteen players, and will also exclusively feature vehicles. Custom made maps from the community will also be made available for free.

The PC exclusive will be on Steam Early Access towards the end of the year for beta testing, and released soon after.