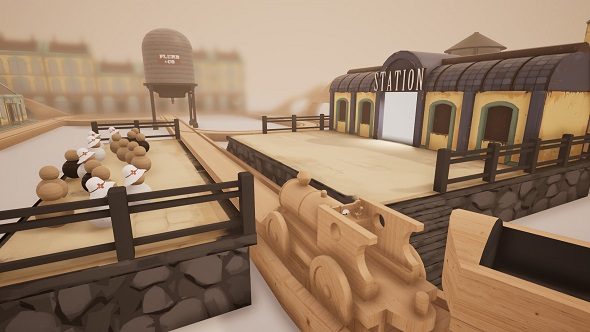 All aboard for wholesome fun, as the model train set simulator Tracks is heading to Steam Early Access on September 28. If you never had the opportunity to play with Brio as a kid, this is your chance to experience the joy of building a wooden train track.

Planes, trains and automobiles are all present in our list of the best PC simulators.

Currently available as a free demo, the full retail release of Tracks will allow players to ride the rails in first person, with train drivers having to balance the speed and weight of the vehicle as they chug around the track. Alongside its sandbox mode, Tracks will have a challenge mode where players will have to build tracks to fulfill special tasks like making the perfect freight train network.

Players can place scenery and buildings to transform a boring old train track into a thriving virtual rail system. If making a safe commuter route isn’t your thing, you can always make an extreme railway, complete with jumps and hairpin bends. You have full control of your train when driving, so conductors can go as fast as they want when they’re behind the controls.

Tracks looks to be a fantastic chill-out game, and perfect for those wanting to relive childhood memories without spending hundreds on Brio. Developer Whoop Group are looking to implement Steam Workshop support for the full release of Tracks, so players can create and share their own wooden trains and buildings. The early access period will see Whoop Group making more environments, more trains, and customisation options for those looking for a modern train-driving experience.

Tracks will pull into the early access station on September 28. Let’s hope there’s no need for a replacement bus service on launch.