The day has come. Train Simulator 2015 is now a work of irrelevance. All hail our new locomotive overlord, Train Simulator 2016, and its jet-propelled trains, rookie-nurturing driver assists, and painstakingly crafted new routes.

Developers Dovetail Games are moving away from the time-honoured annual release cadence with Train Simulator 2016, instead offering a live service throughout the coming year including several significant expansions, the first due this October.

And when I say its focus is on the extreme side of locomotion, I’m not being facetious. There’s a train with a jet engine, for goodness’ sake.

“You will experience extreme power,” reads the rather rousing presser, “as you haul thousands of tons of cargo over Sherman Hill Summit in the legendary Union Pacific Gas Turbine. Feel extreme pressure as you command the mighty Castle Class in the golden age of steam on the busy Cornish Riviera Line. Use extreme precision to beat the clock as a Deutsche Bahn driver on the challenging West Rhine Mainline.” 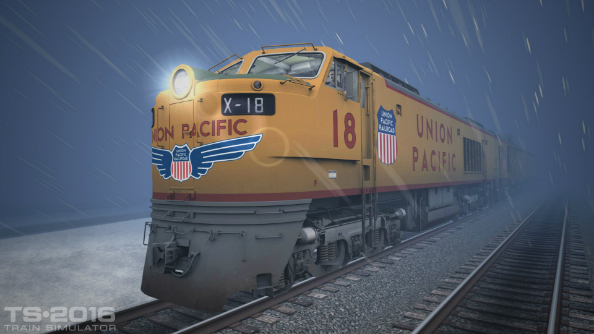 I’ll put my hands in the air at this point and openly admit to not being hugely interested in trains, extreme or otherwise, but those words make me at least a little bit curious.

And if, like me, you once tried to play a Train Simulator over a decade ago, couldn’t get the bloody thing moving after 20 minutes of clicking on random dials and levers, and vowed never to darken the doorway of that coaldust-covered hell again – I’ve got good news. There’s a new driver assist system this year that’ll tell you what to do if you’re floundering. Or, as Dovetail put it, “provide intuitive real time prompts to keep [you] running smoothly.”

Here’s the list of routes and machinery TS2016 offers initially:

Steam is currently offering 15% off, if you buy the game before 24th September.