Trove is building something new. That’s not exactly unexpected of a voxel-based game – someone is always building something new – but this is more than a community weapon. This is a whole new PvP mode, throwing ten players into an arena to do battle and seize flags. It’s a mode developer Trion Worlds has been thinking carefully about, because Trove isn’t your usual brand of fantasy MMO.

If you haven’t yet got involved then you can try Trove for free right now.

“We’re a block builder and it’s pretty important to us that all the big features we put in have a component of player creation,” explains Andrew Krausnick, the game’s lead developer. “For the case of PvP it made the most sense for that to be building the arena itself.”

Trove’s PvP mode – the Battle Arena – has been in beta for a couple of weeks, but is now being unlocked for everyone. It’s a 5v5 game of Capture the Flag, with the emphasis actually being on doing that rather than amassing killstreaks. Each game lasts just five minutes, an idea influenced by games with universal appeal like Nintendo’s Splatoon. “They’re really quick [games], which we find helps reduce the sadness when you lose,” reveals Krausnick. “If you get really invested in a game and play for an hour, when you lose you’re really upset. But if you play five minutes it’s like candy: yeah you lost, but you’ll play another one.”

The Nintendo influences go further: character power-ups dotted around the arenas have a Mario Kart quality to them. They’re available are based on a banner that you equip, so new banners provide a different suite of rewards. The more excessive among the selection include the ability to summon pets, and creating fields that stop people jumping.

That banner, which protrudes from your character like a Japanese Standard, is the basis for your progression. It provides boosts to health, damage, regeneration, and various other stats, which helps keep progression in PvP entirely separate to PvE. “We wanted it to be more of a level playing field,” says Krausnick. “We do want there to be some [progression] chase, but we designed that part separately. So to increase the stats on your banner you need to gain rewards from winning matches.” 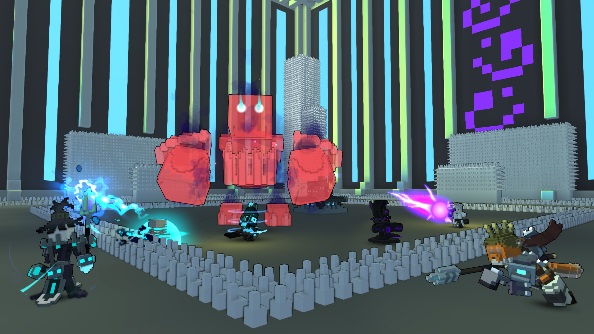 Banners are topped with a recognisable sigil, which works in a similar manner to how seeing the silhouettes of each Team Fortress 2 character informs you on exactly what kind of fight you’re in for. “The little sigil on top [of the banner] represents the power you have. People can look at that and see that guy has the sharpshooter standard, so he’s going to get these certain power-ups that they should watch out for,” explains Krausnick.

The key elements of Trove’s Battle Arena are all well designed and considered, but as exciting as any of them are, they all play second fiddle to that original point: Trove is a block building game, and players will be able to create arenas. “We’ve added new terraformers that are going to let you set up an entire area, build it into an arena, and then play a PvP game right there from your world,” tells Krausnick. “It’ll take that arena and do matchmaking with it, so any number of people can take your arena, play a match, and get full rewards.”

Despite the emphasis on building, don’t expect that to be part of the PvP gameplay. “We tried destruction and it quickly degenerates. It doesn’t matter what the map looks or feels like because it gets flattened,” details Krausnick. “So the current mode the arenas are solid.” But as those player creations flow in, things may change. “ I think we’ll try something where game modes and rules are designed around building and destruction. It’s kind of a fun, quirky mode,” he adds. 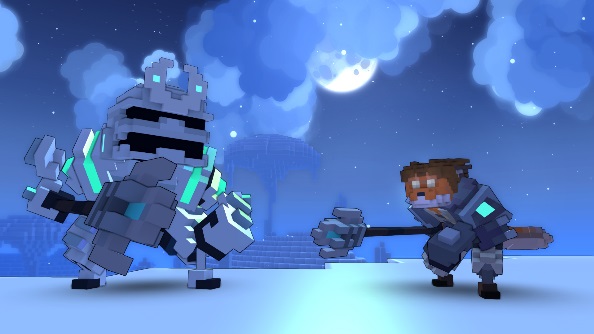 While Trion have obviously started the mode off with maps created in-house, eventually PvP should evolve to a point where player-created maps are dominant. “We’ve built stuff, we’re pretty good and we’re professionals, but it’s iteration and time that makes things good,” says Krausnick. “When you put tools out there for everyone to use, some people are really good, and have a lot of time and do a lot of iteration, and they just come up with something amazing”.

You can’t discuss community maps without pointing to Minecraft, but Trove operates a little differently, in that player-created items are submitted to Trion for approval before being made available to all players. “We find that wild creative space leads to interesting things that eventually become refined, and we can port across the game that everyone can access straight out of the box,” explains Krausnick. It means everyone can play something player-created, removing the hassle of learning how to find, download, and install mods. Easy for many of us, but with Trove’s wide-audience appeal, it’s a smart move. It’s a system that will be applied to PvP, so expect to see the selection grow over time.

Which brings us back to Mojang’s goliath. One of Minecraft’s most exciting aspects is how the game’s players have crafted entirely new modes, from Survival Games to GTA clones. Trion are hoping to see a similar burst of creativity in Trove’s community. “The way it works is you build a section in your world, you put down a portal and you jump through it. That portal defines your game rules,” explains Krausnick. For the vanilla version of Battle Arena, the portal is coded with the rules for 5v5 Capture the Flag. But as players get creative, those portals can be fitted with new rules. “We found people want something different. Ship battles, deathmatch, all these other game modes. We can just make additional portals that have additional rules,” says Krausnick.

With ideas already flooding in from beta players, it’s unsurprising to find that Trion are very excited for Trove’s PvP future: “The more you look, it blows my mind. It’s so hard: they’re doing what we’re doing, but they’ve got worse tools. And their [arenas are] already better than what we’ve made!”