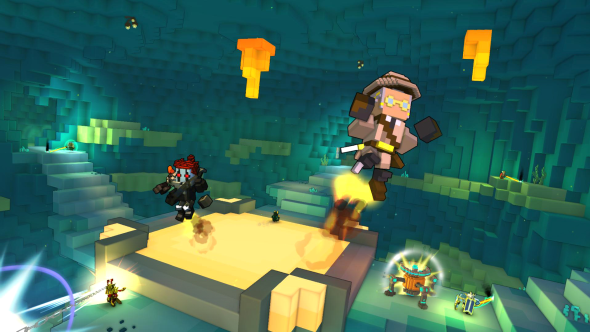 We don’t know when you last checked in with Trove, the fully destructible action MMO. But like any one of its maps, it’s been changing and evolving, reshaped by its developers and players over the three years it’s been on Steam.

Recent adventures have taken in neon-lit megacities, while creative Trovians have made everything from castles in the sky to bacon swords. And if the havoc of the multiverse gets too dizzying, you can always plonk down your Cornerstone – the home you build yourself and plant in any world you happen to be visiting. An oasis of calm amid the cube-powered madness.

Like your games freeform, do you? Try one of the best sandbox games on PC.

That’s just as well, since Trove’s new Geode expansion takes the game into brave new areas of game design it’s never attempted before. At one end you’ve got a planet to explore where violence, for the first time, isn’t the answer. And at the other you’ve got Bomber Royale, Trove’s most competitive and explosive mode yet.

Hold onto your house and join us for a rundown of the free update’s finest features.

Travel to the planet Geode 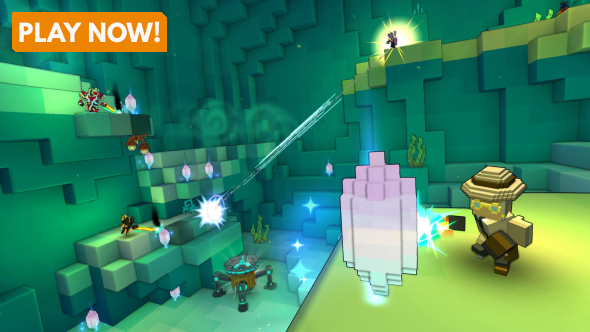 Have you ever visited Geode? It’s a beautiful place, especially underground, where the rock walls glisten as if embedded with strange jewels, and bubbles burst from the centre of periscope-shaped plants. But on the surface, dread Q‘bthulhu and the forces of shadow have taken over, determined to strip the once-pristine planet of its resources. Guess they noticed the glistening too.

The local residents have found sanctuary on the Builder’s Spire, but need the Trovians – that’s you – to help them take back their home. And, in an unusual twist, you won’t need a sword to do it. 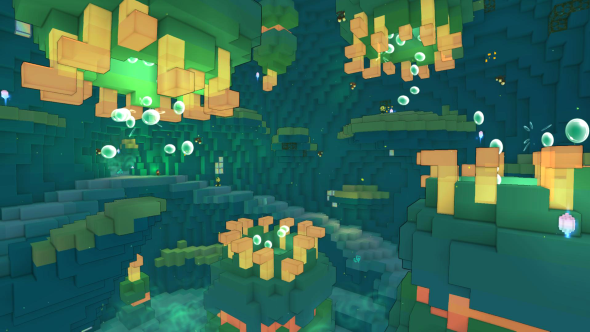 If you’re familiar with the origins of the word ‘geode’ then you’ll know to expect rocks, and lots of them. The focal point of the planet is its vast, randomly generated cave system, which you’ll explore to find resources to use in the future war for Geode.

Surviving this subterranean world is a matter of preparation, requiring you to craft and upgrade Geodian tech to defend against the elements. But life thrives here too: you’ll find a world of oddball flora and fauna deep under the earth. Pluck the eggs from these caves and they’ll hatch into new companions who bring special benefits. Note we didn’t say ‘friends with benefits’. That’s an important distinction.

Solve problems without your sword 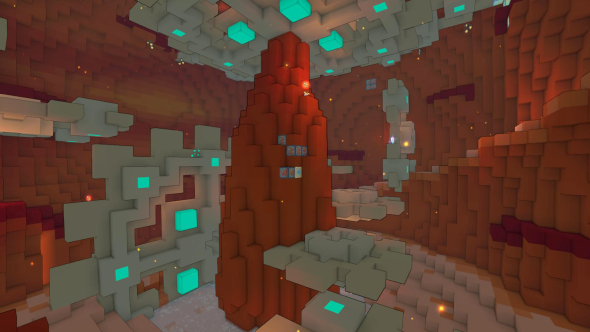 While Trove is a game about building things, it’s also one in which you destroy. Combat has traditionally been one of its core systems, fed by a variety of healing and stat-boosting items. Geode, however, represents a bold new step, in which exploration takes over from combat as a primary drive.

The Geodians are a peaceful people, and as your new quest givers, they’re not exactly going to start asking you to thwack their enemies on the head with anything. Instead, they’ll send you into a maze of tunnels to dig for the solutions to your problems – anything rather than resort to violence. Unsurprisingly, it’s an expansion with a very different feel to previous adventures in Trove. And Bomber Royale is its polar opposite.

Be among the first to experience Bomber Royale 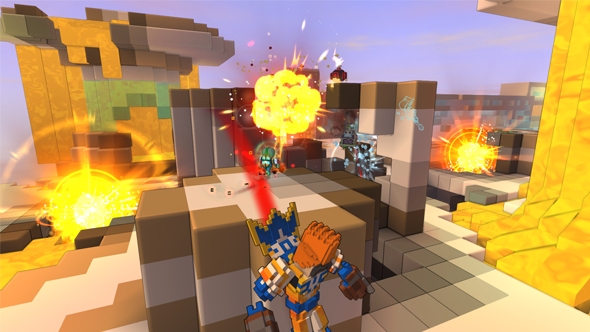 Fortnite has allowed us to dismantle buildings, but it takes a game as free-form as Trove to bring fully deconstructable terrain to the battle royale genre.

Up to 20 players square up – sorry, cube up – on one of three maps. Each combatant must lob bombs at the others until only one remains, and that’s not the only aspect of battle royale to make it to Trove – the edges of the map will erode over the course of the round, forcing you to face your enemies. Of course, you can accelerate the process of map disintegration yourself using your bag of bombs. They come in several types, including sticky and bouncing.

The action is enlivened further by moves and power-ups, like the grappling hook that lets you zip across lava or deadly drops. Once you’ve mastered all of this, and start placing well in end-of-match rankings, you’ll earn a special seasonal currency that can be exchanged for season boxes, items, and auras – fancy visual effects that can be applied to hats and weapons. This is no cul-de-sac diversion – all the experience you gain for your character in Bomber Royale will contribute to your adventures in Trove at large.

The Geode expansion is available now. Visit Trove’s site to sign up for free and discover the caves for yourself.