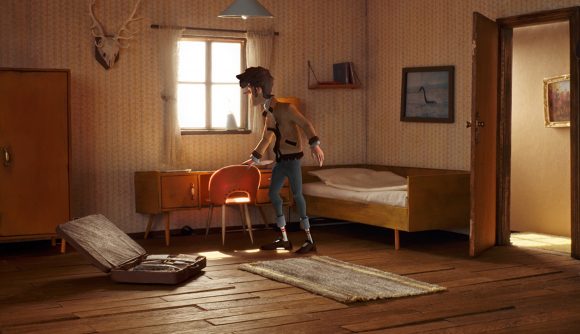 Truberbrook is a traditional adventure game with a sci-fi mystery, and it’s got a heck of a visual twist. Every environment in the game is built by hand using miniature models. Those models are then digitised using photogrammetry so that they can blend with the computer-rendered characters, and the diorama-style results are incredibly impressive.

The game is set in rural Germany during the height of the Cold War in the late 60s. You’re an American physics student named Tannhauser who’s won a vacation to the titular town of Truberbrook. Things get strange as you meet a cast of local weirdos and dive into the town’s mysteries – the official rundown also promises dinosaurs, which is always very exciting.

This all plays out in the traditional adventure game form. You point and click your way around the environments, picking up items and chatting with NPCs. Solving puzzles means either using your inventory in creative ways, navigating challenging bits of dialogue, or pushing against more bespoke sorts of tests – you know, adventure game stuff.

Check out the trailer below for a taste of what Truberbrook’s handcrafted scenery looks like in motion.

The developers took Truberbrook to Kickstarter back in 2017. It met its funding goal in little more than a day, and ended up reaching €198,142 before the close of the campaign.

Truberbrook is set to launch for PC on March 12, 2019. Versions for just about every other platform under the sun are coming too.