I use GeForce Experience for the optimal game settings for nearly all of my games. Sure, sometimes I tweak them once I’m in, but it’s nice to have something to tell you what settings will give you the best experience. With its next update, it could become damn essential.

The Share beta is live now and it boasts a ton of new features, including an in-game overlay – accessed by hitting alt+z – to capture video and stream to Twitch, as well as integrated YouTube capabilities. Another feature will allow you to stream local co-op games to a friend’s PC, without them needing to own the game. 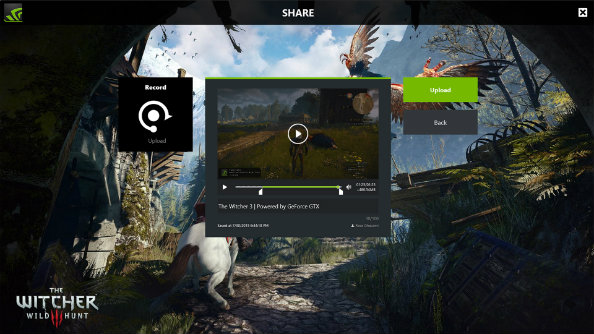 You can set it up to record the last 5-20 minutes of gameplay, or choose to record at any time.And with Nvidia ShadowPlay, which utilises hardware on their graphics cards, game capture has very little hit on performance while capturing video up to 4K, at up to 60 frames per second. Sounds like you won’t be needing that capture card.

There’s even an integrated gallery and a simple editor that you can use in the overlay and upload the footage straight to YouTube. Here’s the rundown in video form:

If you want to join the beta, you should be able to download the update through GeForce Experience from now. Here’s the official post.