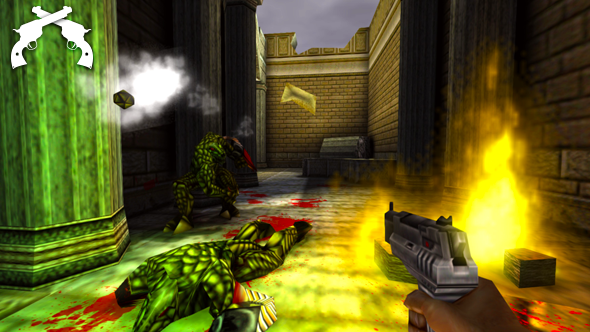 This is The Gunsmiths, a PCGamesN series about videogames’ favourite interaction: shooting people directly in the face. There is no shortage of great games where gunplay is the main draw, so we wanted to dig down into these games’ inner workings, breaking them apart at a tool bench, and seeing the components spread out across its surface. For our third in the series, it’s the retro gibs of Turok 2.

Turok 2 was born from a singular vision: to make the most impressive videogame weapons for the time. Instead of a knife, Turok wields a dagger-strapped knuckleduster called the WarBlade. A knife clearly just wasn’t enough. Ordinary guns wouldn’t do, either. Though the game does have a range of traditional firearms, it also features weapons such as the Razor Wind – a circular, bladed boomerang that gibs enemies with every throw – and the Cerebral Bore, a homing drill that burrows into an enemy’s head, eventually popping it in a fountain of claret.

Both of those weapons were inspired by Krull and Phantasm, movies that David Dienstbier, project lead and lead designer, had grown up with. The tech at the time was cutting-edge – the Nintendo 64 allowed the team to do things that had never been seen before. This meant they could really push what these weapons could do, both visually and mechanically. Take the Sunfire Pods, a throwable weapon that stuns enemies – if you use one against the subterranean ‘Blind Ones’, their susceptibility to sunlight sees them spontaneously combust.

“We were also able to add purely utilitarian items like flares because we had superior lighting in Turok 2,” Dienstbier recalls. “That was not only neat, but was useful for getting cleaner shots with weapons. We tried to expand on how the weapons looked on screen as well as how they might impact gameplay. Our tech made so many things possible. When the limb dismemberment tech was given the green light, it drove a lot of the weapon design choices. The Cerebral Bore was a dream of mine that needed not only the tracking, impact, drilling, and accompanying gouts of red and gray matter, it had to have the big finish by blowing off the poor sap’s head.” 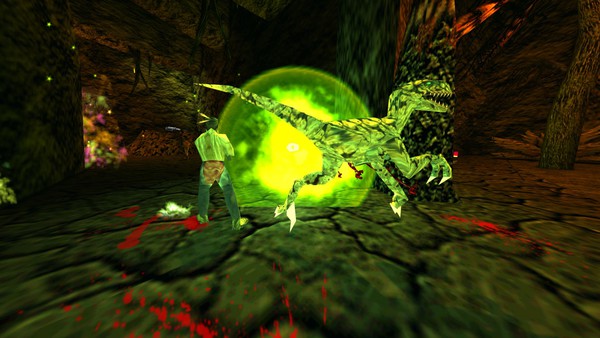 This over-the-top violence was at the gory core of Turok 2’s satisfying gunplay. The game’s rendering system, for example, showed both bullet impacts and blood spatter on the ground, walls, and ceiling, allowing you to paint the levels crimson with every skull you bore. This was challenging to implement. Firstly, because the decals needed to stop rendering on the edge of walls. Secondly, because the team had to focus on optimisations to keep the frame rate in check as the levels got busier, filling up with player-created mess.

“In addition to weapon and enemy blood decal effects, we also gave the designers and artists the ability to build and place destructible geometry throughout the environment that could be triggered with weapon fire or from the level scripting system,” tech lead Steve Broumley tells me. “We [also] improved the Turok 2 enemy rendering and animation system so that weapon impacts could trigger mesh swaps along with simultaneous animation state swaps. Combining the two, we created very satisfying enemy limb dismemberment and head decapitation effects. This kind of thing had never been seen on the N64 before.”

The hit collision tech was similarly overhauled for this sequel. The game would register exactly where each projectile hit, so blood would gush from every impact. It is thanks to this that you can impale enemies with exploding arrows, filling them up like a pincushion, seeing them animate as they continue to come after you before they finally explode like a red, meaty geyser.

“The collision system allowed players to not only damage enemies, but damage specific body parts,” lead artist Alan Johnson explains. “Shooting a leg or arm off gave a much more realistic feel than previous games. Head shots could literally remove an enemy’s head. There was a bit of over-the-top gore to emphasise this, which really helped make the weapons feel destructive. When creating the characters, we made sure they were set up to be ripped apart in various ways to show bones and organs.” 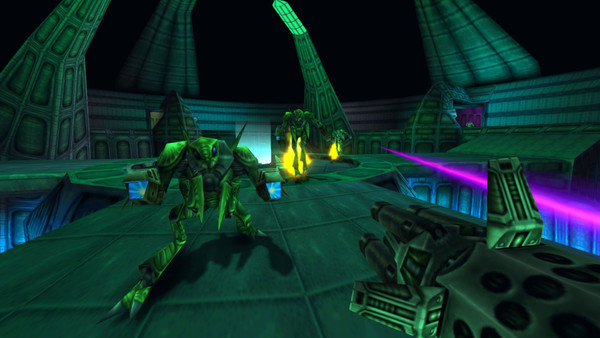 From a technical perspective, then, Turok 2 was ahead of pretty much everything else on the console. Its particle system was unlike anything anyone had seen, thanks to some texture mirroring tricks and reduced colour formats, letting the team squeeze out higher resolutions on the miniscule 4KB of texture RAM they had to work with on the N64. “In addition to handling a ton of individual impact particles, we also implemented a streaming particle system to create the glowing flame thrower and curdling blood gushing effects,” Broumley says.

Of course, these enemies would not be satisfying to gib if they just stood around doing nothing. Luckily, the AI was drastically improved for the sequel, thanks to pathfinding techniques and ‘look at target’ and ‘move to target’ commands. Due to the restraints of the system GPU, the AI was carefully tailored to keep the frame rate high, meticulously engineered to fit within these constraints. One of the tricks they used was to allow only one enemy per frame to use pathfinding, keeping the frame rate high while also giving off the illusion to the player that there was more going on.

“These features alone gave the enemies much more realistic movement and behaviour,” Broumley remembers. “I still remember revealing for the first time the pathfinding algorithm in action – we had an enemy navigate around a tricky cliff path towards the player’s location, all the while looking at and shooting at the player. The enemies suddenly acted intelligently and didn’t just walk over the edge of the cliff in a straight line towards the player. During development, we built upon this even more and implemented a flocking system, where one enemy would be the leader for the other enemies to follow.”

The team also implemented new enemy reactions for the sequel.. “Some enemies would attempt to take cover behind objects in the world,” Dienstbier says. “And when locked onto by a particularly gruesome weapon would run around in a state of panic.” 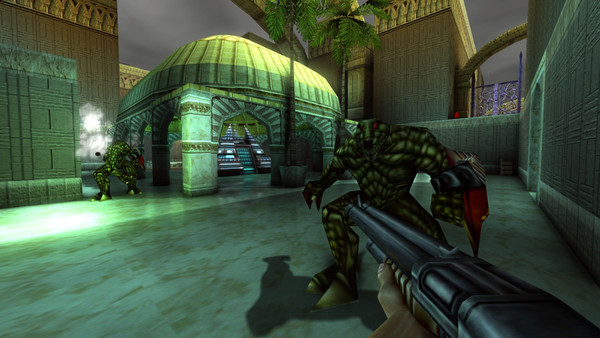 All of this effort would have fallen flat without audio, however. Back then, teams didn’t have the luxury of going out and performing extensive foley work for their sounds, so much of the audio was mixed from a sound library. Gunshots were blended with other gunshots, and those sounds were layered over with other noises, such as explosions, to really make things go boom.

“We didn’t have the memory resources to use a lot variations, so crafting the weapon sounds didn’t require vast amount of source material like it does today,” lead audio designer Marc Schaefgen tells me. “We also were not worried at all about authenticity, it just needed to sound satisfying. The pistol was actually mostly a majorly distorted version of a recording we did at an indoor range in Austin. Many people did not like the pistol sound because it didn’t sound powerful enough, and that was the one that was most like a real gun. Dave was very supporting of the fact that for the big weapons to sound big, the little weapons needed to be not so big. If you compare the pistol to the double barrel shotgun blast, there is quite a huge difference. This is one of the things I think that helps make the weapons feel balanced is that the visual and audio effects have a balance.”

So it goes like this: the booming gunshot audio signals the shot from your weapon, the bullet impact decides which parts get gored, then the ragdoll animations kick in to send a corpse careening. Internally, the team called this sequence of events ‘crazy awesome violent deaths’, and many of the human death noises were actually Dienstbier screaming into a mic.

Bringing all this into the modern age was the task of remaster experts Nightdive Studios. Rather than messing with the original assets, they added widescreen support, antialiasing, shadow maps, and post-process effects like per-bone motion blur, meaning modern players could bask in the nostalgia – and gore – of the original game without it losing any of its N64-era charm. As for the sound, the team opted to convert to the N64 version’s audio, as it was superior to the older PC version of the original.

“The challenge there is that everything in the game’s ROM file was compressed and tightly packed into chunked archives, and none of the documentation for the internal formats survived, so there was a bit of reverse engineering involved in getting at the data,” software engineer James Haley tells me. “We had to consider how to best render the sounds in a modern OpenAL audio engine. We added a low-pass filter effect to eliminate high-pitched noise from upsampling to 44kHz, for example, which gives a smooth experience for the listener. We needed to re-implement features like pitch shifting and looping to work with the Kex Engine as well, and all of these are controlled through its sound shader system.” 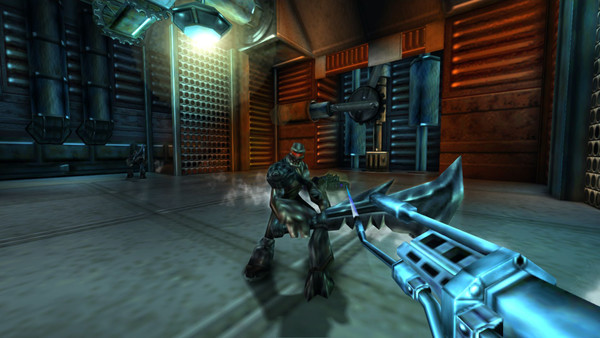 Updating the audio and visuals for the remaster was not the biggest challenge. The team also had to make the multiplayer function on modern machines. To complicate things, Turok 2 had two different multiplayer versions – the old PC build and N64 – each with different maps and weapons. “We made the decision to merge them together, and then write a completely new netcode to handle all of it for online multiplayer,” lead multiplayer developer Edward Richardson explains. “The netcode also handled synchronisation of some of the unique weapons in Turok 2, such as the Cerebral Bore, which in the end required the server to tell clients to execute a specific script. Testing multiplayer was a lot of fun, and we continued to play it well past launch, so merging the two worked out well.”

Despite all those upgrades, Turok 2 still feels great because of its solid foundations, all of them built around that single ideal: make the best guns. This alien armoury, much like the increasingly loud weapon sounds, slowly ramps up as you play. “The ramping of the weapons both in terms of what they do, how they look, and the impact they have on enemies really was about making the players feel that they were the baddest guy in this world,” Dienstbier says.

“Whenever a new challenge or enemy presented itself, we wanted the players to feel at a disadvantage initially, but to be rewarded by discovering weaponry that felt like now the tables were turned. Now the enemies had better take note, because Turok was on a rampage. So the entire method to the madness was about progress, reward, and results that aligned with our – my? – admittedly rather single-minded goal to make Turok weaponry the best gaming guns at the time.”

So the next time you are splatting some dinosaur hybrid’s head with a Cerebral Bore, watching as his insides turn to outsides and decorate the walls, spare a thought for all the components that fit together to make it all work. Show some appreciation for the gunsmiths.

To see Turok 2 in action you can watch us play it over on Facebook, Twitch, and YouTube.