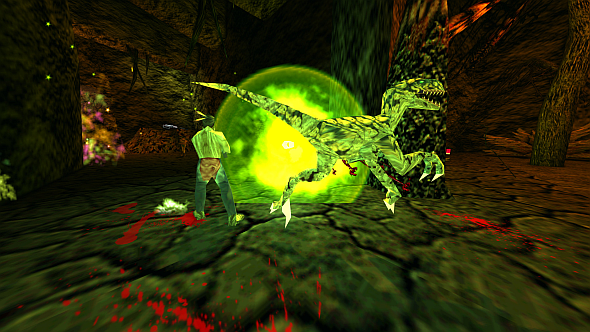 As I regularly remind my colleagues to their continuing appreciation, the best games were made in the ‘90s. Releasing just one month after the original Half-Life, Turok 2: Seeds of Evil was a decent shooter in which you killed dinosaurs. It got a PC remaster earlier this year, and that remaster is now on sale on GOG for half price.

What else issued from that wondrous decade? Get into the classics with our list of the best old games on PC.

Based on the comic books of the same name, the ‘90s Turok games were a riotous series of pulp sci-fi that meshed time and space. Torn from a world long gone, you are the time-traveling warrior Turok, thrown into a ‘Lost Land’ full of savage dinosaurs, ruled by a lunatic with a sinister plan to conquer the multiverse. The sequel is similar fare, but with a new lunatic.

The Turok 2 remaster, released in March this year, added a new multiplayer mode and made a number of improvements to graphics and gameplay. Specifically:

If you’d like to see some gameplay, we’ll be streaming the game at 15:00 GMT today. Turok 2 is also the subject of Kirk’s latest Gunsmiths feature, a series in which he asks how developers make shooters feel satisfying. That, too, will be live on the site at 15:00, and is well worth a read for shooter fans.