Following an email leaked by a Twitch partner a couple of days ago, the Amazon-owned streaming service have officially confirmed the beta rollout of two new subscriber tiers, along with some other in-development features.

The news comes via a post on Twitch’s blog, and announces new subscription tiers at $9.99 and $24.99. Apart from the option to support your favourite streamers with more money, the main incentive to give a more expensive subscription appears to be emote-based.

Custom emotes for subscribers are one of the benefits of being a Twitch partner. Depending on how many subs a partnered streamer has, they get a number of slots for custom emotes (here are the details of the scheme, if you’re interested).

For the purposes of unlocking those slots, every $10 sub is worth two subscriber counts and every $25 sub is worth six. So for streamers, offering the more expensive sub tiers means they have a chance of unlocking new slots faster, meaning you’ll get more fun pictures to play with in chat. Partners may also offer certain roles or features exclusively to higher-paying subs, according to their discretion.

It’s all a bit of an experiment, and will launch as an opt-in beta on partnered channels “very soon” – this should be later this month, according to the original leak (below). You can still sub at the lower, current tier of $4.99, if you like.

As the programme develops, Twitch are looking to further extend interactions between streamers and their viewers. This will include “long-requested features like the ability for a user to gift a channel subscription to another non-subbed user, which will be coming to Twitch later this year. We’re already working on it, and expect to start testing this within the next few months.”

Happy birthday, granny! What, haven’t you heard of LobosJR?

Original story April 18, 2017:According to a leaked email that supposedly went out to Twitch partners, the popular streaming platform is about to roll out a beta for two new subscriber payment tiers: $9.99 a month and $24.99 a month. The current $4.99 per month tier will also remain as an option.

An image of the email has been uploaded to Imgur, and is the subject of eager discussion on both NeoGAF and Reddit. If true, the new subscriptions beta will kick off “later this month”, and streamers will have the option to opt in. 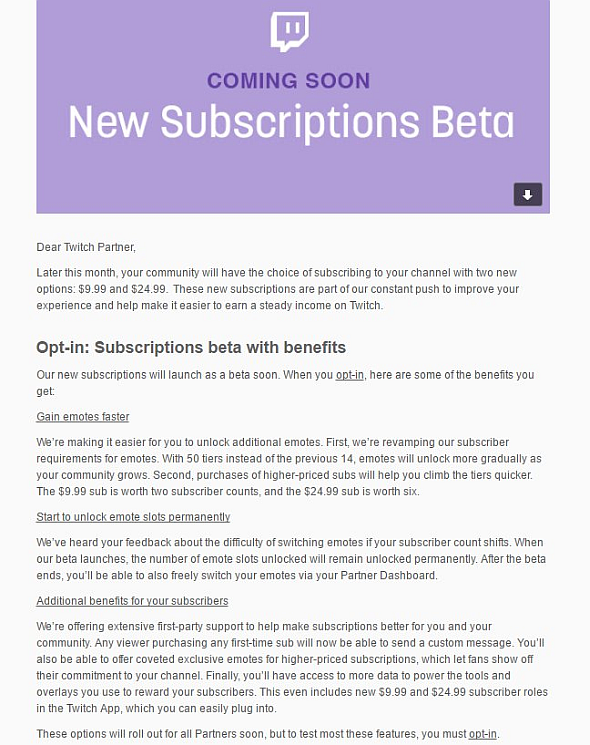 Reddit OP floralcode has pasted what they claim are comments from Twitch partners who received the email, suggesting a mixed reception:

These comments may or may not represent the views of actual Twitch partners, but they reflect community reactions pretty accurately. There’s some worry that streamers will betempted to lock certain features–even chat– behind higher payment tiers.

Equally, some sayit’s to be welcomedthat streamers might soon give viewers the option to pay more if they wish, and are hopeful that it will enable smaller channels to get off the ground faster. After all, the existence of successful Patreon and GameWisp accounts for existing streamers proves that loyal viewers are already willing to pay more. Streamer MonotoneTimdismisses the partners who are concerned as “big dweebs”.