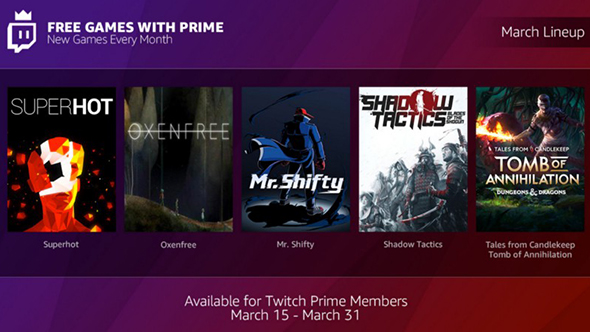 Twitch Prime’s first batch of free games will be available from today. Among the first set of games are Superhot, Oxenfree, and Shadow Tactics.

At time of writing, the games don’t seem to be available, so I imagine they’ll drop at some point this afternoon or evening European time. There are five free games available in March and April, and you can check out the full list below.

Original story, March 13:Twitch Prime subscribers are getting a big new bonus beginning this Thursday, with monthly selections of free games coming to every member. Most of the titles in the first two waves are smaller indie games, but there are plenty of well-regarded names in that list. Every game is free to keep forever, even if your subscription runs out.

The first selection on March 15 includes these five games.

The second rotation begins in April with these titles.

Twitch have also confirmed that all the titles included from their Indie Amplifier vote will eventually be included in the subscription. In addition to the titles above, that means that High Hell, I, Hope, Kingsway, Treadnauts, and Tumblestone will all eventually make the cut.

You’ll install all these games through the Twitch desktop app, similarly to the company’s previous free giveaways including Devil May Cry HD. Twitch Prime is included as part of an Amazon Prime subscription, so if you’re a member with the massive shopping site all you have to do is connect your accounts.