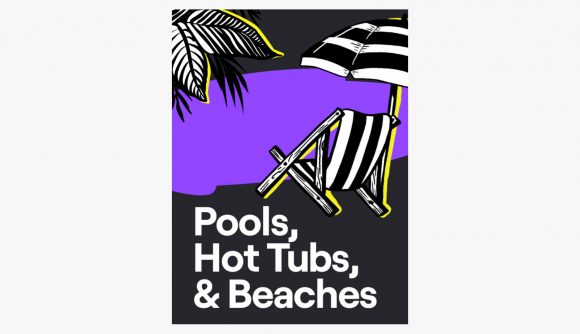 Apparently, the only thing that makes a gamer angrier than a woman in a revealing outfit being removed from a game is a woman in a revealing outfit streaming on Twitch. Yes, the hypothetical Thomas Gamer, Twitch Streamer has spent the last few months complaining about women in bikinis getting more views than his Call of Duty streams, and Twitch has finally responded to this exhausting controversy by essentially saying ‘no, you idiots, we’re not banning anyone for being hot’.

Well, okay, the actual thing Twitch says in its new blog is that “while we have guidelines about sexually suggestive content, being found to be sexy by others is not against our rules, and Twitch will not take enforcement action against women, or anyone on our service, for their perceived attractiveness.”

Now, Twitch has created a specific Pools, Hot Tubs, and Beaches category, so if you want to watch a woman in a bikini converse with a mostly-horny Twitch chat, there’s now a place for that. (There are also already all manner of insufferable memes, if that’s your speed. The PC Gamer stream is very good, though. Kudos to the team over there.)

There are, for the record, currently over a half-million viewers watching Grand Theft Auto V streams right now. There are about 23k watching the hot tub category.

The addition of this new category comes after model and streamer Amouranth, the most popular hot tub streamer on Twitch, found earlier this week that advertising was suspended on her channel. She’d received no prior communication from Twitch prior to being demonetised.

“On Twitch, brands get to decide where and when their ads appear,” Twitch says. “Today, they can target or avoid specific categories of content and flag channels that don’t meet their standards. This means that Twitch, in rare cases, will suspend advertising on a channel at the advertisers’ request.”

Twitch acknowledges that “we should have alerted affected streamers to this change before it happened–it was a mistake not to do so. We’re working with individual creators to address their specific situations and restore ads where appropriate.”

For now, though, the hot tub category is intended in part to solve the advertiser problem, as “brands can either opt-in or -out of this category based on whether it aligns with their target audiences, like they can today with any other category.”