Battlefield Hardline is a disappointing let down. No matter which way you slice up this pie, no matter whether you enjoy or resent what Battlefield Hardline actually is, the reality of the game simply doesn’t tally with the beautifully choreographed trailer EA so proudly projected in front of thousands of salivating E3 attendees.

EA suggested this was a pure co-op bank robbery sim. In truth it’s a loot grabbing free for all with little to no incentive to work together. EA suggested we’d have fully populated car chases and explosive getaway centrepieces. In truth we have self-serving gunmen spread thinly across a map, camping on rooftops, picking off lone players in a sort of dressed-up deathmatch mode. EA suggested this was something new. In truth it’s something old, a game that feels tired and over-familiar from the first loadout screen.

Steve: Well, that’s what I think anyway, and I got to write up the intro. PCGamesN’s Matt Purslow might think differently. Do you think differently, Matt? I hope you do, otherwise this may come across as a little one-sided.

Matt: I’m the Battlefield apologist around these parts. I wrote an article defending Battlefield 4, so this should be the part where I start scribbling out your thoughts in red marker and shouting WRONG! multiple times over. But there’s no escaping it: Battlefield Hardline is bad. Not bad because it’s a poor Battlefield game – it does shooting and big ear-splitting bangs as good as any of them – but because its promise of a cops and robbers romp is a mere tissue draped over the same game as EA gave us last year. The jump between Battlefield 3 and 4 was small but noticeable. Hardline feels like Battlefield 4 with Los Angeles tattooed all over its face.

It upsets me. Back in the day Battlefield was a brave series. And whilst recent years may have seen it play a little safer, it always felt like a series with ambition. To move from warzones to urban crime seemed the bravest move in a long time, but instead Hardline is the most cowardly entry in the game’s history. 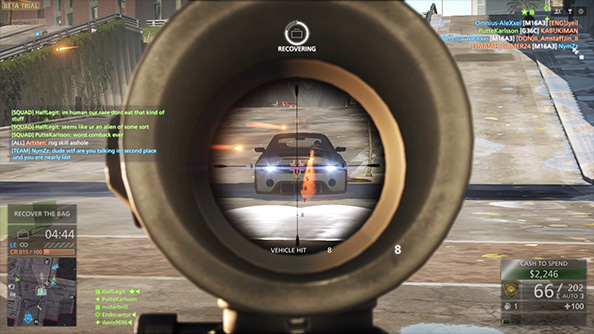 Steve: It is a shame, too, as Battlefield DLC of old showed the potential to be game-warpingly substantial and appropriately cheap. Add-ons like Vietnam really pulled a lot of extra ideas out of the base game, whereas mod support has historically been a spawning ground for new studios. That’s the criticism most often levelled at this Hardline beta: that it looks and feels like a polished, but hollow, fan-made mod, one that’s been packaged and sold as a full release game. And not an especially good one.

You only have to look as far as Payday 2 to see a developer doing this sort of game mode correctly. Stage based, with preparation, sieges, assaults, getaways and an escalating response from an AI police. 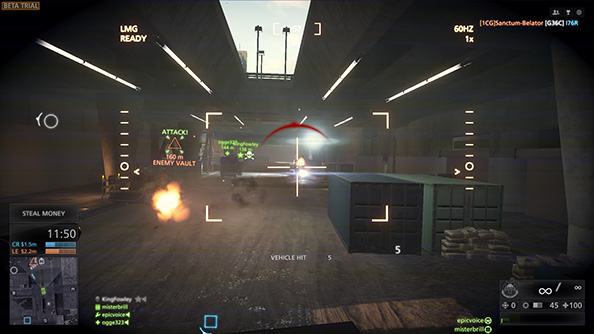 It’s not just the lack of pressure that makes Hardline’s criminal roleplay feel off, either. Weapon options are identical for both cops and robbers, as are the classes. This means equipment is a bizarre mix up of SWAT-grade gear and black-market shooters. Most of the guns feel ripped from military arsenals, which feels downright odd in the hands of criminals, but overall does nothing to separate Hardline’s gunplay from any other Battlefield game.

It utterly destroys the theatre of the game. And it’s not like Battlefield hasn’t done this right before; Vietnam saw asymmetrical weapon loadouts, replicating the conflict by providing increased heavy armour for the US and more infantry solutions for the Vietnamese. 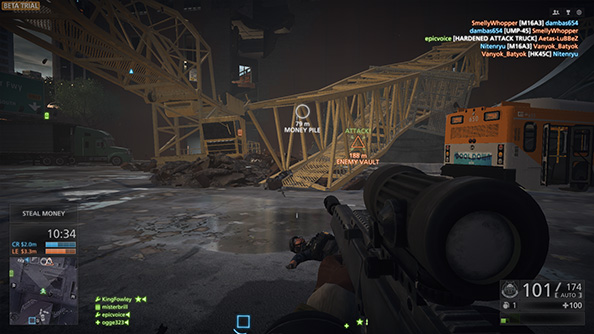 Steve: I totally agree that these opposing teams should be asymmetrical. Not only should they be armed entirely differently, but they should have completely different experiences when they play. That is, after all, much of the point of cops and robbers: that the police forces are tactical and numerous while the thieves are wily and manoeuvrable. The cops have the guns and army, but the robbers have the plan, the escape route and the element of surprise.

That Blood Money game mode is an absolute clown show, with players on both sides making return journeys to a cash vault MacGuffin, like pigeons madly mobbing a pile of birdseed. Where’s the setup? Where’s the actual robbery? Why do the thieves start out three blocks away from the loot they’ve presumably just secured? What even is a “hardline”? It’s making me angry just thinking about it.

Also, every time I join a game that crane’s already fallen over. I’ve never seen the crane falling down and it’s really upsetting me.

Matt: Oh Steve, you’ve missed the game’s best feature! As it tumbles the crane drags down the side of a skyscraper, shattering windows and obliterating concrete in thick dusty smoke plumes. It’s a short, delicious distraction from the circus below. I’m still confused as to why these Levolution show-pieces never offer any meaningful changes to the game though.

Aside from Blood Money the beta is also host to a game of Heist. Unlike Blood Money, Heist actually attempts to simulate crime. Criminals actually start at the vans they’re breaking into, and the police must speed through the city and respond to the incident. With the vans blown open, the criminal team must then escort their prizes to two secure location. At least I believe that’s the case; I’ve never actually seen it happen. For the first few moments of the game it feels like Visceral are onto something, there’s an initial urgency as everyone attempts to do their job rather than score sweet headshots. But after everyone’s been killed for the first time and the forces are spread over the map, it quickly fizzles out.

I think there’s a problem in that the traditional Battlefield ruleset doesn’t encourage playing the scenario. Sure you get 250 points for picking up the loot, but who cares when you can easily snag that with some kills? The reward for actually winning the game is negligible compared to your individual murder score. Unless you’ve got two teams of dedicated roleplayers, Hardline’s fiction is non-existent. 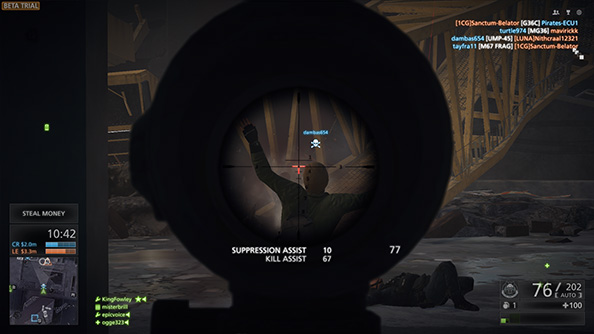 Steve: It’s so alarming that Heist, a game mode in which two teams must fight over a briefcase, is the best and most imaginative scenario Battlefield Hardline can come up with. I’m sure there’ll be more game modes of course, but this is the game’s demo, this is the slice they’ve chosen to best represent their new vision: a reskinned capture the flag. Bah. I know that Visceral are a creative superforce and that they’re capable of so much better than this, but this is an reprehensible let down, a cynical rehash.

Quite why they launched the beta mere seconds after showing that falsified E3 presentation is utterly beyond me. EA just inadvertently set a world record for shortest time between maximum hype and crushing disappointment. It is with morbid curiosity that I now await the game’s full release.

Maybe we should’ve discussed this with at least one person who thinks otherwise. I feel a little bit mean now.