Another day, another hospital. Before anything else, I need to build a reception desk so I can check in the horde of patients pressing against the doors, flinging snot and disease into the morning air. After that it’ll be time to build another GP’s office. How many of these have I built now? I’ve lost count. The room needs to be at least three squares by three, have a door, a desk, and a filing cabinet. Do I have the money to add any extras to it? Right now I do, but further down the line I know I’ll regret buying that yucca plant.

Two Point Hospital has been built by people who made some of my favourite games when I was younger. We’re talking Black & White, Fable, and – of course, the connoisseur’s choice – The Movies. This new game of theirs takes heavily from their work on Theme Hospital, it being a hospital management sim after all, and wonderfully it has all the modern doodads such a reimagination should. Beyond the fantastic art style, Two Point Hospital has granular management menus that are reminiscent of those found in Planet Coaster, which means they appeal to my need to fiddle with, well, everything.

However, while you have the option to customise every facet of your buildings – similar to Theme Hospital – there’s room to add add more convenience. Specifically, it would be great if Two Point Hospital gave you access to premade rooms. It quickly becomes tiring having to choose and position each individual component of a room so that, with every new hospital, you have to recreate the same hospital basics. The GP’s office is always at least four by three squares so the absence of a premade option is frustrating. I’d create the damn blueprint myself if I was able. 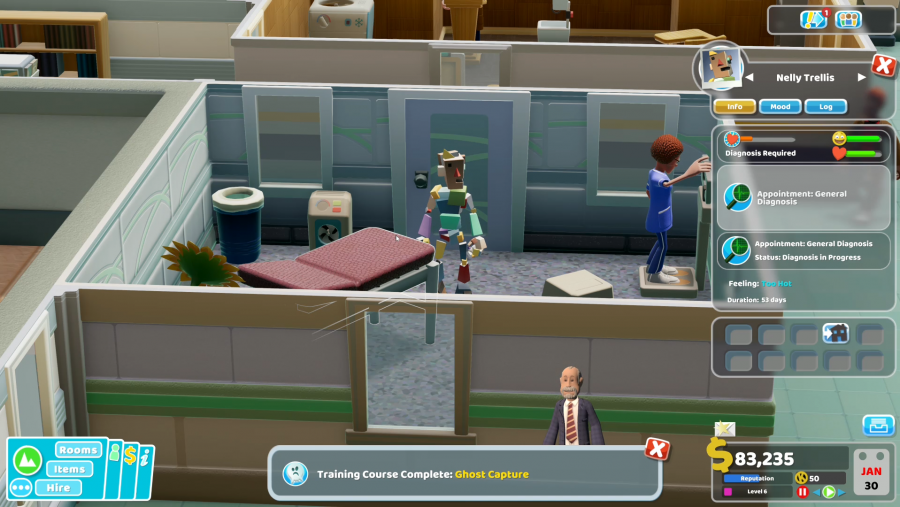 Every bizarre illness in Two Point Hospital comes labelled with a magnificent pun. Those afflicted with light-headedness present with symptoms of bulb heads, and if you have a bad case of Mock Star then you'll think you're Freddie Mercury.

Where Two Point Hospital shines like one of the polished white tiles adorning my wards is in how it makes hospital staff feel like actual humans. They plead when you threaten to fire them and have conversations in hallways rather than walk like robots between patients. The hiring process is one of my favourite parts of the game – choosing which candidate has the best qualifications while also considering their temperament and various positive or negative traits. For example, Dr. Victoria Bolognese is motivated and tireless, so she’s an obvious hire, whereas Aldo Codswallop is nausea inducing, hangry, and swallows his gum – need I say more?

The dry British humour on display in those names carries over to the radio presenters and tannoy announcers of your hospital. But while it’s funny and cute to begin with, after you hear the same announcement for the 30th time, their voices soon wear thin. “We’re sorry for the litter that you dropped on our floor,” the tannoy sounds off, but I stopped laughing at that joke several hours ago. Fortunately, when you’re so engrossed in planning and decision-making, you might not notice some of the repetition. 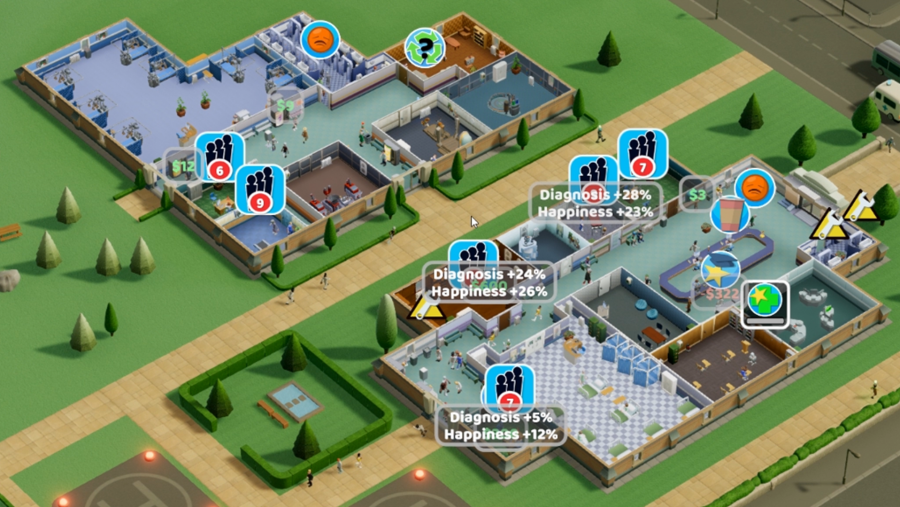 Two Point Hospital is a fitting successor to Theme Hospital

Once you get back to a straight face you can refocus on the task of getting your hospital to at least a one star rating – this unlocks the next level, and gets you a few bonuses for doing so. There are many challenges to complete in order to get a one star hospital, and on top of that sometimes your staff ask more of you, too. Oh, you want a staff room with a prestige of four, do you Nigella Findlater? Well, did you consider that maybe we’re in dire need of a room to save people with Jest Infections? The staff challenges aren’t of the utmost importance, but they do highlight where your hospital needs improving, which offers a little useful direction.

Repetitive building aside, Two Point Hospital manages to make each level feel fresh by giving you new challenges, new ailments, extreme weather, natural disasters, and new areas of research. The hospital named Melt Downs, for instance, gives you an abandoned old facility, with rubbish strewn all over the place, broken machines, and unpredictable weather. However, my favourite has to be Duckworth-Upon-Bilge, where you take over a public hospital under the strapped-for-cash Two Point Health Service. This one starts with many pre-built rooms – I’m a fan already – but the catch is, you don’t make money from diagnosing, treating, or mistreating patients. This is better for my moral wellbeing – I felt bad having to increase my prices to cover the costs of running my hospital – but it did mean I was relying on the health minister to pay up when we completed his extra challenges. 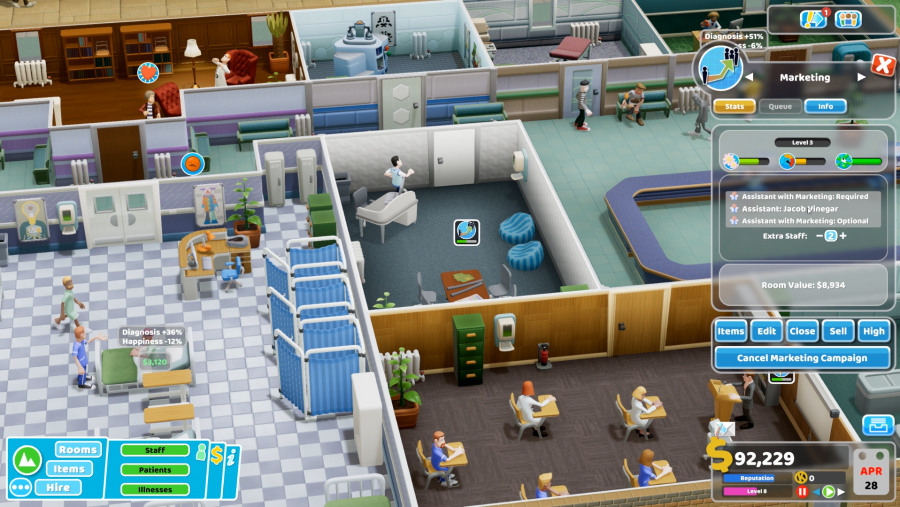 Like Theme Hospital before it, much of Two Point Hospital’s entertainment comes from its outlandish ailments. At one point, my staff demanded I shoot the monobeasts – the monobrows of infected patients – infesting my hospital while I was dealing with an outbreak of Ancient Egyptian mummies. If nothing else, they represent a horrible waste of bandages.

With 15 hospitals to play through to three stars, Two Point Hospital finds plenty of reasons for you to start again from scratch as you learn of new ailments, find new ways to cure, and unlock new decorations for your hospital. Additional strategy comes from the fact that each hospital is connected – as such, it’s worth keeping one hospital as a place of research so its teachings can be spread across your whole organisation. It’s a shame you can’t similarly transfer the knowledge of how to build a GP’s office between hospitals, of course, but I’ve dealt with that by learning to construct them in less than 30 seconds. UI gripes aside, Two Point Hospital is a fitting successor to Theme Hospital, even if a few health checks are still required.

After years of waiting for a game to capture the same joy of Theme Hospital, Two Point Hospital arrives as an able successor. Although, two decades on we'd hoped it wouldn't share the same flaws.