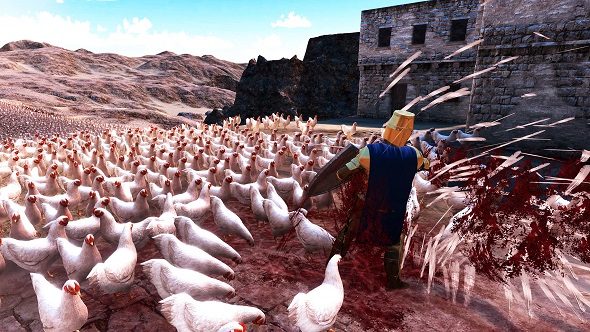 If you looking for more serious strategy games, check out our list of the PC’s best.

Total War this is not, as UEBS is more focused on being a huge sandbox where players can create whatever battles they want to see. While you can simulate things like the Battle of Thermopylae, the main draw of UEBS is creating silly scenarios where a single soldier has to fend off 2000 ravenous turtles, for example.

The stats of every unit can be tweaked, so you can make your army as weak or as strong as you wish. The launch update finally added ragdoll physics to UEBS, so commanders can watch an approaching force of Spartans go flying as they are bombarded with catapult fire. New maps and new units like WWII-era German soldiers and elf archers have been added as well, should you want to see how the forces of Rivendell would shape up against the Wehrmacht.

For a game that seems to be crying out for mods, UEBS has actually launched without Steam Workshop support. It is planned in a later update, but it’s certainly disappointing for modders who have been waiting to create their own fantasy match-ups.

The simulator can generate up to 100,000 units, but developer Brilliant Game Studios recommends that you don’t go past 10,000, unless you have a particularly beefy rig. Do note that most battles aren’t particularly strategic, as most units simply charge into the enemy until one of them is left standing. You can take control of individual groups of soldiers, but your commands are limited to attacking and holding your ground.

It may not be the cerebral strategy game you’re looking for, but it’s certainly good for a few laughs as you set up these ridiculous fantasy battles. Ultimate Epic Battle Simulator is currently available for 10% off on Steam, going for $14.39/£10.79.