Underworld Ascendant game director Joe Fielder is stacking crates. He is a wizard so he doesn’t have to get his hands dirty – instead, he is using a magic wand to pick up and bind the boxes telekinetically. Even so, it is clumsy work. On his first couple of goes, the crate tower he has created gets caught on the ramparts of the underground fort we are infiltrating. He waves his arms to herd the boxes back together with a crackle of energy, as if they were electric sheep.

Eventually, Fielder succeeds in gingerly lifting the crates up to a wall sconce, where, with a little persuasion, he is able to set them on fire. Then, for the finale, he sweeps the flaming tower through the air and into the fort. As hooded undead rally to defend against the attack, he mashes the tower repeatedly into their heads from above until they succumb to fire damage.

If only he were triumphant enough for the story to end there. As it is, Fielder kills maybe one or two before a skeletal soldier runs him through with a sword.

“They may be suboptimal,” Otherside Entertainment founder Paul Neurath says of the solutions Underworld encourages. “But they’re unique.”

The same approach to design was evident in the games made under Neurath at Looking Glass in the ‘90s. The original Ultima Underworld games, as well as Thief and System Shock, combined first-person immersion with dynamic worlds and thrived on the unexpected consequences of throwing you into them.

“We didn’t quite know what we were building,” Neurath tells us. “But it ended up working.”

Looking Glass never expected their games to be remembered – “in that era, games tended to come and go pretty fast” – but their influence birthed the immersive sim genre. Using Looking Glass’s blueprint, other developers eventually found the blockbuster audience that had eluded the genre for so long. If you have played BioShock, Dishonored, Fallout 3, or Deus Ex: Human Revolution, you know the allure of the Underworld formula. 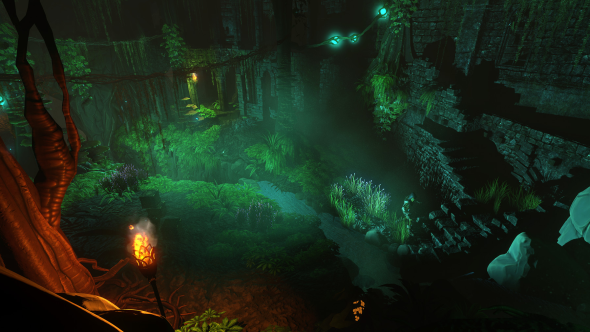 “The important legacy is the innovation and that we continue to push forward,” Neurath says. “We think this category of immersive gaming is one where there’s a lot of room to continue to innovate and see what kind of new gameplay we can do. That’s really the goal of the studio.”

To that end, Otherside are doubling down on player-authored solutions. These unplanned, often inelegant moments are at odds with the slick nature of some of Underworld’s contemporary peers. But there is the sense that the studio would rather cancel the game than break from their beloved first-person view for something as orchestrated as a cinematic takedown.

Fielder’s wizard has returned to the Silver Sapling – a sort of bonsai respawn point that can be planted anywhere, encouraging experimentation. Exploiting a wall-run ability to skirt around the cavern wall to the far side of the fort, he plucks a ripper-fruit from beneath the claws of a huge river plant. This vicious flora forms part of an underground, mana-tinged ecosystem brimming with luminous life, ready to be turned to your advantage. 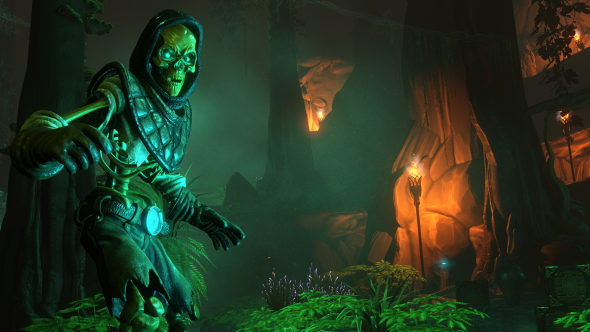 The wizard wafts the fruit in front of a family of deepslugs – peaceful creatures that leave a trail of flammable ooze in their wake. Coaxing them towards the fort, he begins to set the place alight – until his robes are punctured by that same vigilant skeleton. Embarrassing? A little. But this is the emergence Looking Glass once celebrated, undiluted and unedited.

Otherside’s 14-strong team is thick with the blood of former Looking Glass and Irrational staff. Adding to that pedigree are the handful of level designers they have borrowed from Fullbright, the creators of Gone Home and Tacoma, while that team spools up for their next game. And, in 2016, Warren Spector joined as studio director. 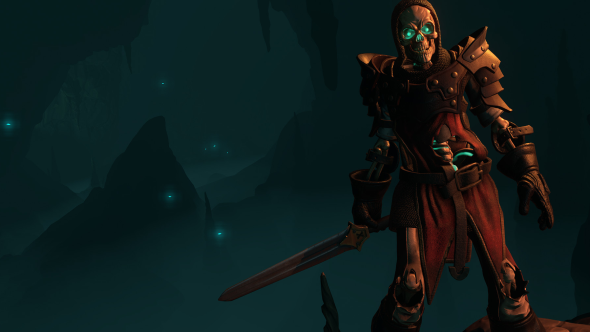 Now they are – from the explicit immersive sims of Arkane to the emergent puzzle-solving adventures of The Legend of Zelda: Breath of the Wild, which Spector views as “validation.” Today, Otherside’s job is to carve out a space for themselves among the studios Looking Glass inspired.

Ascendant might not be the cool, bionic shades-wearing immersive sim you pull off the shelf to introduce your friends to the genre, but it is the most committed to supporting your bullheaded ideas for working around a problem. Even, or perhaps especially, if they look a bit silly.

This feature was originally published on February 02, 2018. Read more about Underworld Ascendant.