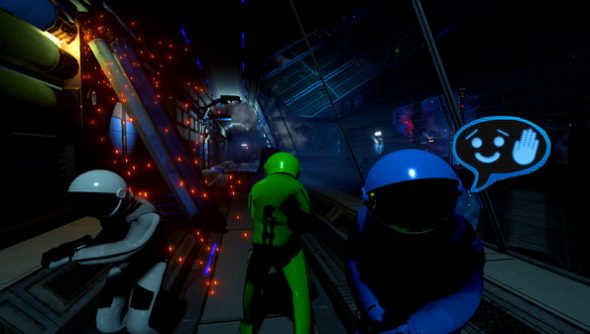 There’s something about the thought of a shapeshifting entity that just gives you the fear, isn’t there? It’s what made the liquid terminator in Terminator 2 so sinister; it’s why the agents in The Matrix are such a threat; and, apart from the weather, it’s what makes The Thing so chilling. It’s that same paranoid fear that Unfortunate Spacemen plays off.

Learn to trust your friends in our list of the best co-op games on PC.

Unfortunate Spacemen takes a group of online players and cast them as spacemen (and women) trying to survive in a failing outpost, collecting samples, keeping the power online and scavenging for supplies through a variety of randomised objectives.

Each round begins with you assigned a colour – just like Reservoir Dogs – and then you’re dropped into the action. It’s not just the lack of oxygen outside the ship, the temperature on a frozen planet, or the worry of being sucked out of an airlock you need to contend with either – one of the players is actually a shapeshifting alien.

The alien can look like anyone it wants, and it has to do everything it can to make you all dead – locking you outside, rigging an airlock, or just getting you alone and taking a bite out of your skull. Keep an eye out for anyone who keeps skulking off for some alone time, as the alien will need to take their true form every now and then.

It’s a great idea, and you can see an early version of it in action with the developers below:

Unfortunate Spacemen is in Early Access on Steam now for $12.74. It’s a promising concept, but do keep in mind that it’s an early build.