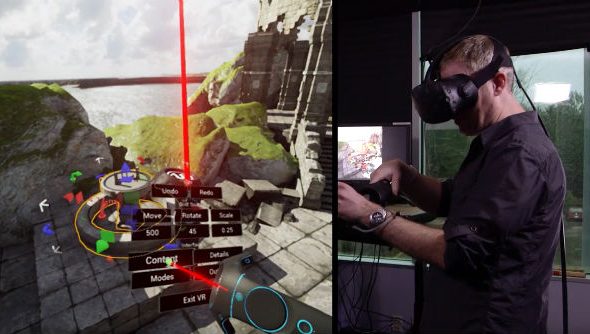 Yesterday, Epic Games suggested they had something up their figurative sleeves that would allow us a “glimpse into the future of VR development.” Today, they’ve revealed that to be the possibility of developing VR games within a VR environment. Sound far fetched? Check out the trailer below.

Which of our best PC games do you reckon need some VR treatment?

Any time I doubt just how successful VR might be by the time it finally finds its way into our living rooms, something like this comes along to reaffirm my desire and my excitement. Yesterday, via the Unreal Engine Twitter account, Epic Games teased today’s reveal. “This is not some special experimental project,” says Epic’s founder and CEO Tim Sweeney. “This is the Unreal editor running in VR.”

“Now you can go into VR, have the entire Unreal editor functioning and do it live,” says Sweeney. “It almost gives you god-like powers to manipulate the world.”

As opposed to using standard, generic, oh-so-boring hardware such as a keyboard, a mouse, or a monitor; using Unreal in VR means swapping all that for a head-mounted display, motion controllers and an in-suite tablet that displays the editor’s content browser as it would appear on this side of the screen. Just, wow.

I’m not nearly intelligent enough to understand how all of the above works in practice, but my goodness does it warm my heart to know there are others out there who are. What a time to be alive. As a recluse who lives in a virtual world, mind. But what a time nevertheless.