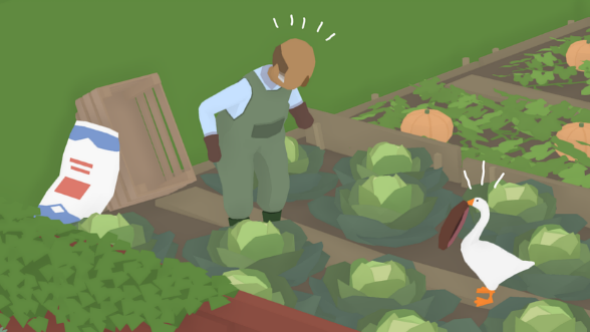 Untitled Goose Game encourages you to be a dick. That you are also a goose is secondary – this is a project entirely concerned with wanton misbehaviour. As the titular waterfowl, your sole objective is to frustrate and terrorise a remarkably patient gardener. Your victim is no Mr. McGregor, though, and will never threaten your life, don’t worry. You will likely threaten his sanity, however.

House House’s game is a freeform stealth effort in which you tick off a list of irritations for no other reason than you are a goose and cannot be blamed for such behaviour. We have been keeping an eye on the project since its announcement at the end of 2017, but GDC provided the perfect opportunity to pick up a controller and have a peck, at long last.

Our demo features a bevy of tasks with titles such as ‘Make the gardner wet’, ‘Have a picnic’, and ‘Rake in the lake’. The soon-to-be-soaked gardener will dutifully tidy up after you, and moves slightly more quickly than you do, so while a game over screen is never on the cards, your hard work could be unpicked at any moment if you aren’t careful. This simple setup provides a surprisingly-rich layer of tension – it is Metal Gear, but for mean people.

The rake, for example, is heavy – for a goose, at least. As such, you will need to plan your heist carefully in order to drag it all the way from the shed end of the garden to the front gate and beyond out into the lake. Get spotted on the way and your flat-cap-wearing opponent will yank it from your beak and pop it back against the wall where it was before. Everything in its right place, and all that. 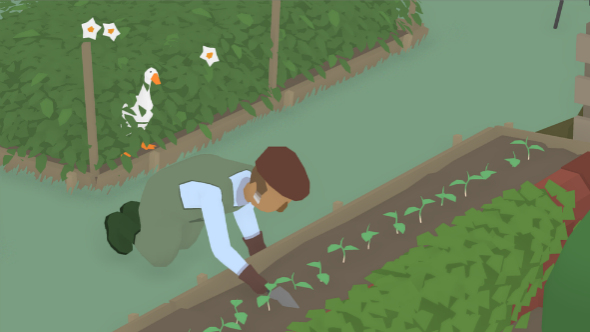 In order to prevent this from happening you can duck behind planting boxes while lugging your quarry, move through the dense greenery of fruit crops, and cause distractions – he really hates it when you dig up his prize rose and dump it unceremoniously among the pumpkins, for example. Such brazen floral terrorism is also useful when setting up traps – we use the rose to lure the gardener over to a sprinkler head at one point while we wait by the valve, ready to soak the long-suffering man and tick off another thing on the ol’ goose list. 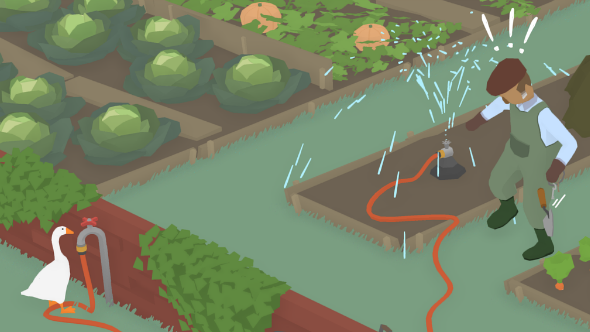 The picnic objective presents an expansion of the rake problem, meanwhile, creating a multipart fetch quest as you steal a variety of objects – from sandwiches and a thermos, to a radio that must be silenced before you make a break for it – and arrange them on a rug next to the lake. And there are key and hat stealing goals too, which require you to sneak up to the crouching man and then scarper with his possessions. It is essentially bullying, and it is remarkably good fun.

House House are still locking down the exact form Untitled Goose Game will take. But even in its current state it is abundantly clear that there is an enjoyably light-weight – in the best sense of the term – stealth game waiting to emerge. We will never look at geese in the same way again.