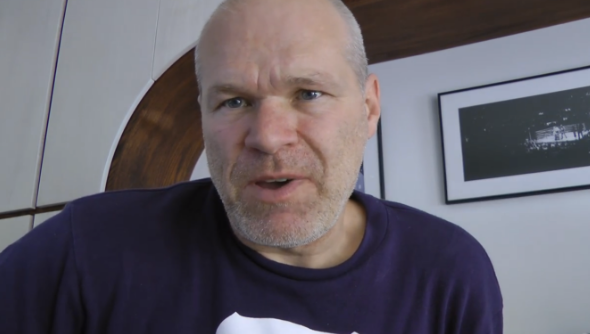 Uwe Boll, director of a variety of videogame movie adaptations commonly perceived to be truly diabolical, is sad today. Why? Because his Kickstarter for his current film project failed to raise its funds.

In response, Boll went a bit bananas on YouTube, saying “basically my message is fuck yourself.”

Boll had recently taken to Kickstarter to fund Rampage 3: No Mercy, which had a goal of $55,000. With three days to go, the campaign had raised just $24,500. This failure was the third of such efforts, with other crowdfunding sites like Indiegogo having failed to help Boll raise his required budget.

“What retarded amateur idiots collecting money on that website [Kickstarter]. For me crowd funding is absolutely dead.”

“I have enough money to play golf until I’m dead,” he claimed.

The director posted a second, longer video later on where he detailed his disdain for Hollywood and big-budget productions, especially investors from abroad. “I’ll find another Chinese, Alibaba idiot…who wants to see his fucking yacht in Cannes to fuck supermodels. That is the movie business!” he said.

Apparently Hollywood A-listers like Brad Pitt and Robert Downey Jr are “laughing” at people who spend their hard-earned cash to see their “Marvel Avengers bullshit dirt”.

After lambasting Jennifer Lopez for attempting to raise awareness for the environment before jetting off in a private plane, he said that Rampage was an important movie due to the core motive of its central character: “Kill the rich.”

So says the man who has enough money to play golf until he’s dead.