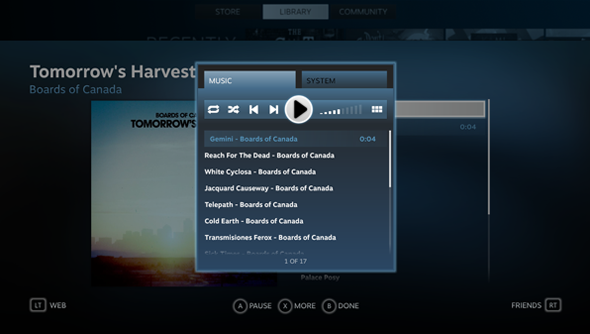 With a distant, somehow funky boom, Valve’s pulse cannon signals the initial salvo of invites to Steam Music – the local ditty-player that’ll come as standard with SteamOS. Beta feedback will determine, among other things, whether Valve expands its music library beyond game soundtracks.

Beyond the invited guests, anybody with early access to SteamOS can now opt-in to Steam Music via the Steam Client Beta in system settings. The result, no doubt, will be a healthy public testing base for the new features – just a day after we first heard the words Steam Music.

Steam Music is an integrated media player run through Big Picture Mode. Right now, it’s a local affair which plays MP3s – but support for more file types is on the way, and Valve are open to the possibility of “some sort of streaming music experience” if beta feedback suggests there’s a demand for it.

Streaming’s already possible in conjunction with the in-home beta. When connecting to a remote computer, you can stream its music files using Steam Overlay. A desktop user interface, meanwhile, is “on its way”.

Here’s the bit that affects you: to express an interest in beta participation, you need only join the 86,500 member-strong Steam Music group. Members will receive email invites in recurring waves, until eventually the feature is released to everyone, bobbing about in a happy ocean of .wavs.

“For years, customers have been asking us to provide a basic way for them to access and play music while in-game,” elaborate Valve in a new community update. “Task-switching between resource-intensive 3D games and other desktop apps has never been a graceful experience for gamers, so an in-game player can help by eliminating that pain point.”

More intriguingly, Valve see an opportunity to “broaden Steam as an entertainment platform” – a platform on which games jostle for space with music and “other forms of media”. There’s even a suggestion that they might sell music a la iTunes through the Steam client.

“Steam currently offers a number of game soundtracks for sale,” Valve write. “Your feedback will help guide where we take things next.”

Crikey. Is it too much of a stretch to imagine Steam as the primary home of your music collection, as well as your games?