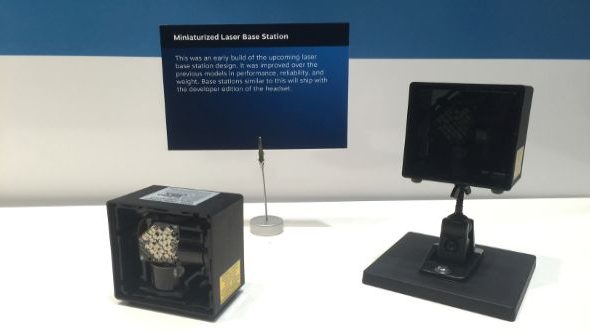 The magic in Valve’s VR prototypes isn’t just in the headset. It’s in the positional tracking of the controllers. That tracking may have many other uses: including helping robot drones understand where they are in space. People who make robots are pretty excited.

“Honestly, the rumors didn’t do it justice: it’s really elegant!” exclaimed Travis Deyle of Hizook. “I think this technology could be a “big deal” for robotics too.”

The Lighthouse transmitter located in Valve’s game-controller prototype relies on a bank of infrared LEDs, and two spinning IR lasers to sweep a 3D environment and determine a location based on the time it takes for light to travel.

This technology is important for two reasons: price and versatility. The photodiodes used in the receiver comes in at just $0.01 a pop, and they’re so small and lightweight that their potential application is boundless.

Here’s what Alan Yates of Valve had to say about the Lighthouse:

“A simple optical position tracking & navigation technique for maker projects. Want your robot or quadcopter to know where it is and where it is pointing in free space? Lighthouse is a scalable way to implement 3 or 6-DoF navigation for your project.”

If you’re thinking this is all of little use to you, then think again. There’s a future in VR as we will inevitably try and expand on it. In fact, it’s already happening: a theme-park called The Void is already developing a complete VR experience inside a giant life-sized FPS game; robotic applications will only further it.