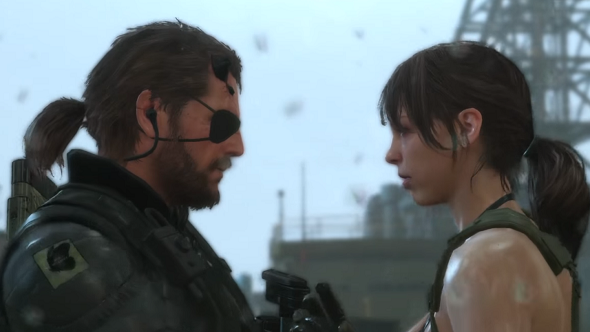 As someone who has been in a relationship for nine years, I have never felt the need to wade into the tumultuous world of online dating. Before I met the mother of my children, I worked in bars, you see, which are basically dating sites that exist in the physical realm. My experience of dating sites boils down to watching in horror as women on Twitter share some of the messages they get from men looking for love online, who often romantically wade straight in with a proposition and a dick pic.

It made me wonder if these sites would be better if they weren’t inhabited by real people. Perhaps pretend men would be more courteous than real men, and maybe pretend women would give the real women a break from the angry men. Mostly, though, I wondered if love could bloom on a battlefield. So I decided to take videogame characters dating.

First, the rules: I would use only videogame characters, complete with a photo of them, tweaked to pass them off as human, and I could only talk to people with quotes from their characters. The whole thing was conducted in the spirit of fun, of course, and so I told the participants afterwards what was happening, and why I had done it.  We also agreed that any replies we featured would be used anonymously. 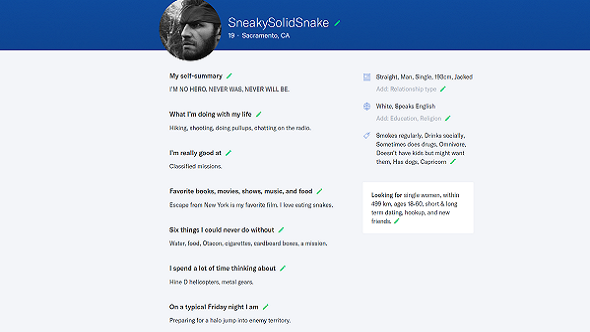 To give me a broader range of responses, I allowed myself to take quotes from Big Boss as well as Solid Snake. I mean, he’s a clone, right? They are basically the same person.

Either way, Snake opened the conversation the same way every single time, in the only way that makes sense: Kept you waiting, huh? 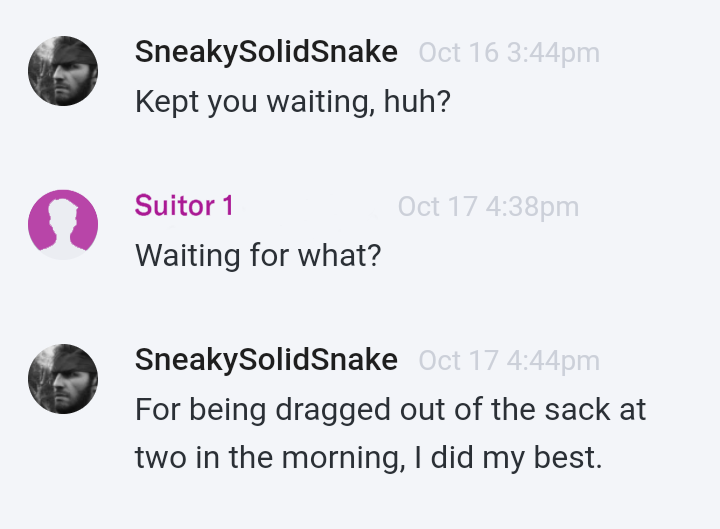 It was his first interaction. He replied in a panic, still grouchy from a day of strangling guards in a forest. How would she respond? 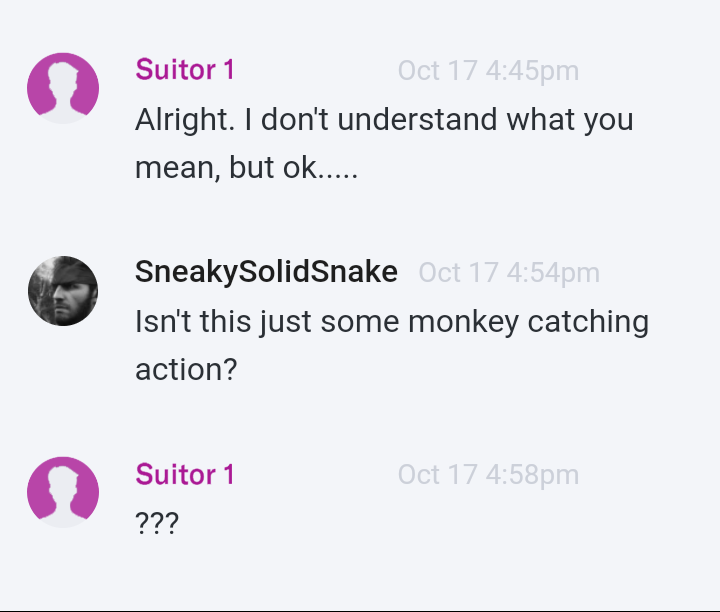 Uh oh. Snake was having flashbacks to the Ape Escape crossover in Metal Gear Solid 3. It caused some confusion.

It was time for someone new. 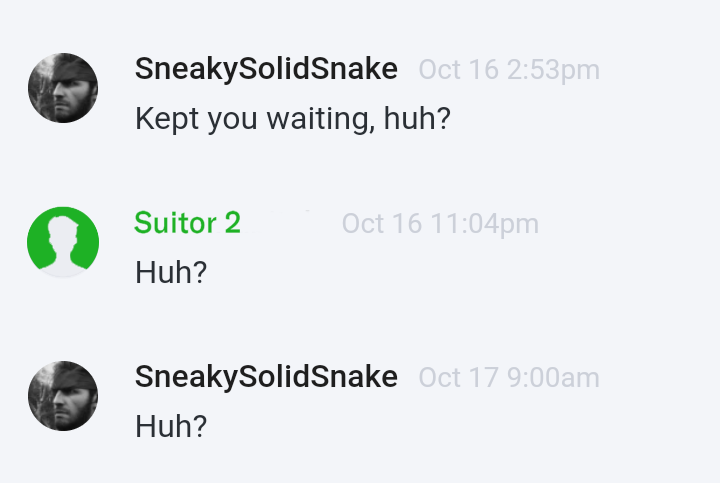 Could this be it? Snake had finally found common ground with someone online. If only she would reply with “what was that noise?” – Snake would surely hear the wedding bells chiming.

Elsewhere, Snake had lost his cover. One woman, a police officer, replied to his opener with “you’re pretty good.” Clearly a fan. Another said her friend told her he was from a game called Metal Gear, which at least allowed Snake to growl “Metal Gear?” in context.

Still, these setbacks would not get in the way of him finding love. He would have one last try. 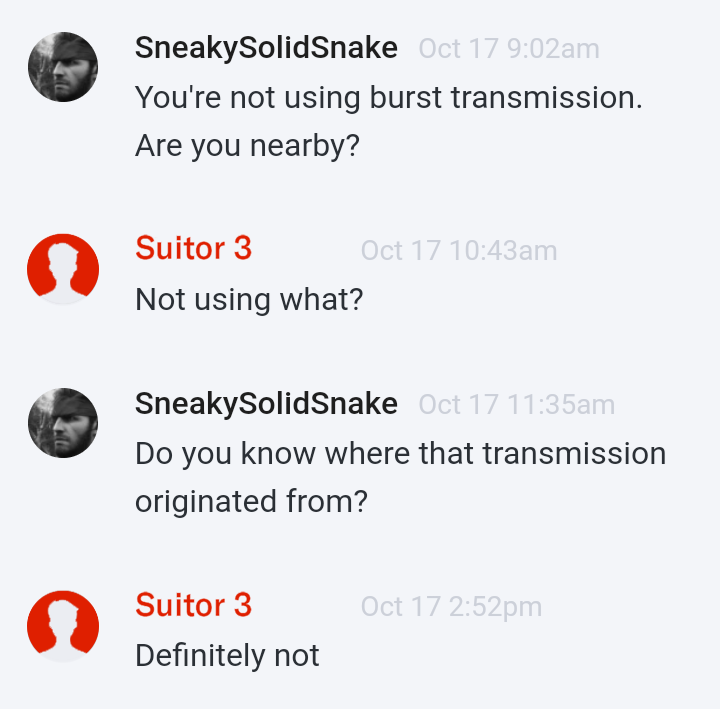 Maybe it was time for someone else to have a go.

In steps Quiet, Metal Gear Solid V’s mute sniper. Will her online love interests be ashamed of their words and deeds? 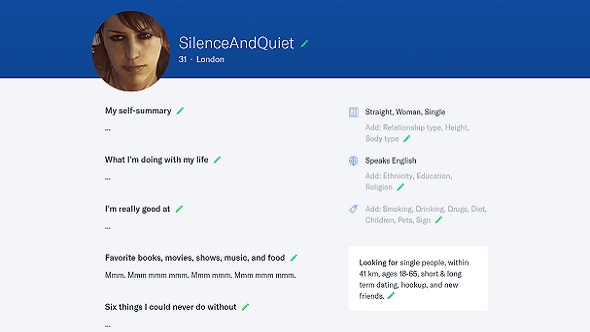 Quiet, as her name suggests, isn’t much of a talker. She usually just hums or says nothing at all, so I wondered how long men would talk to her without a proper response.

The first thing I noticed was lots of men saying they liked her profile, or that it was “interesting.” They totally did not read it. The ones who did said Quiet seemed “mysterious” or “intriguing.”

A lot of men also straight-up asked for Quiet’s phone number or a video chat “before meeting up.” She was also complimented a lot, even when her profile was completely blank, her photo stripped from the page because of a report.

When her photo was on the page, people kept telling her she had a nice smile and fire in her eyes.

It was all too shallow for Quiet, but then she met Barry (real name not actually Barry, because nobody is called Barry). 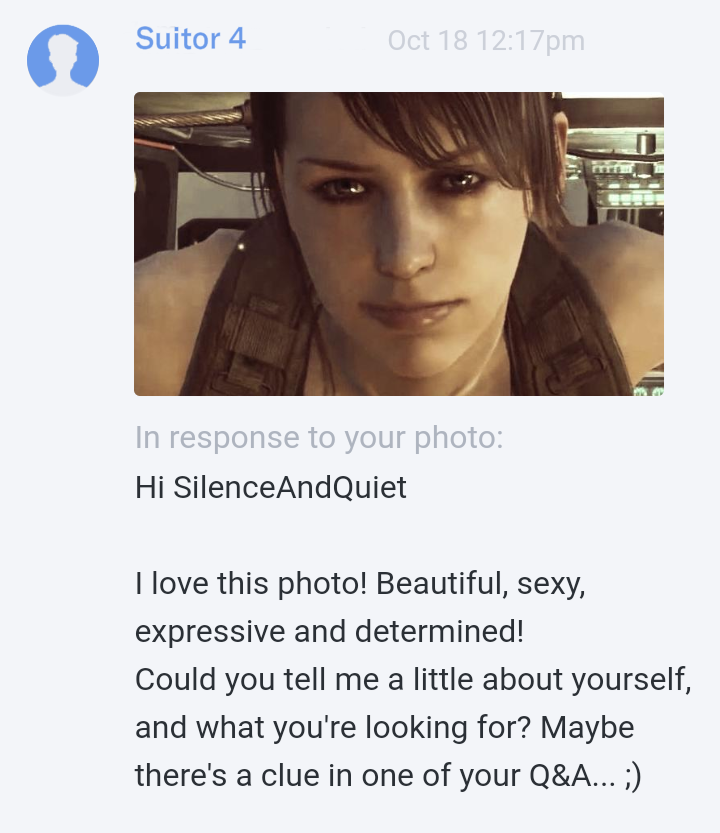 Now, Barry messed up – in no context is the winking emoji ever okay. Do not use the winking emoji. I am a dating website noob, but even I know this unwritten rule of online human interaction. Stop it.

Still, Quiet wanted to give him something back for his ability to read. 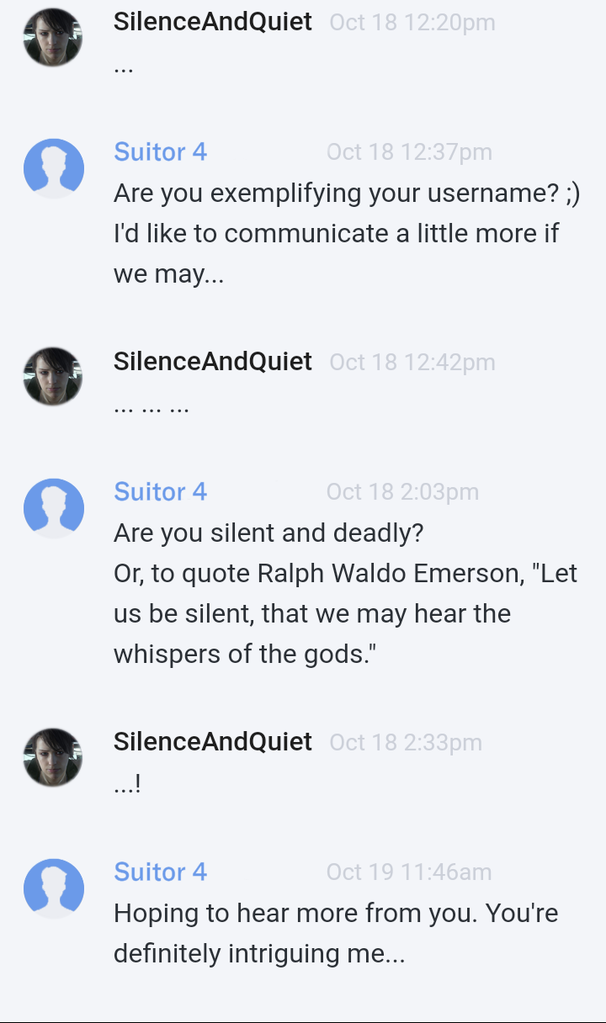 The wink has at least gone by the end. Good job, Barry. And he is still interested. Quiet, you’ve done it! This was much easier than it was with Snake.

I thought Quiet best give him something, if only for his perseverance, so I had her type in “hello” in morse code. 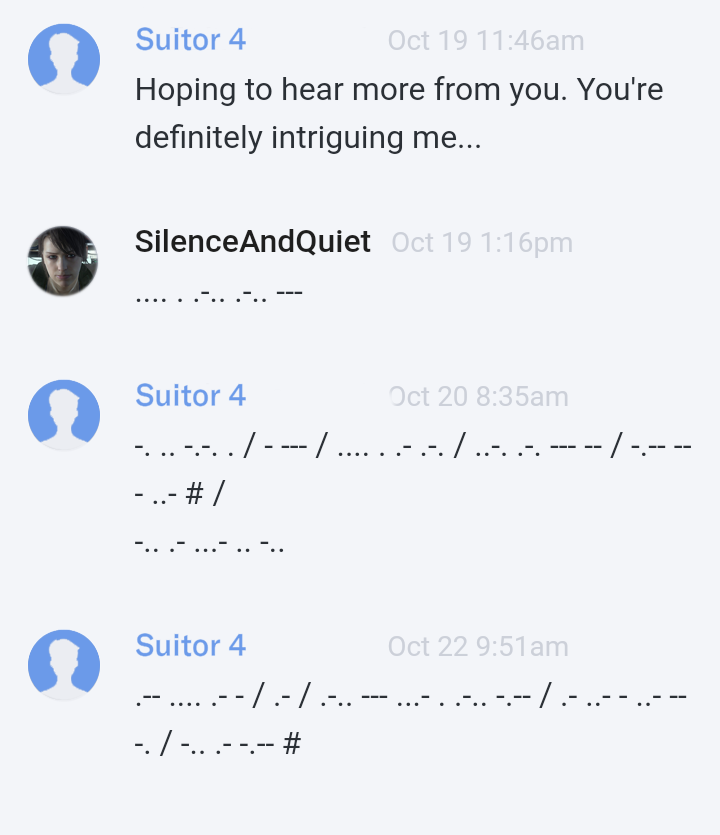 Barry responded in kind. His first reply reads “Nice to hear from you – Barry.” He followed that up two days later with “What a lovely autumn day.” Unfortunately for Barry, Quiet found some lad called SneakySolidSnake and they ran off together to dance naked in the rain.

Only three women ever replied to B.J. Blazkowicz, the poor fella. I wondered if it was something to do with his profile. 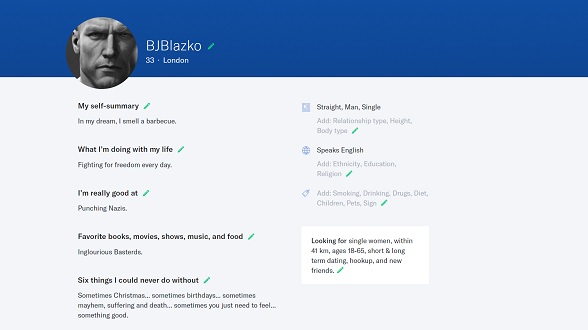 Good old B.J. never gets a break between rounds of killing Nazis. I wanted to imagine how the world would look to him if the Allies won the war when he awoke from his coma. Perhaps he would be ready to find love online.

He’s a bit rusty, however. 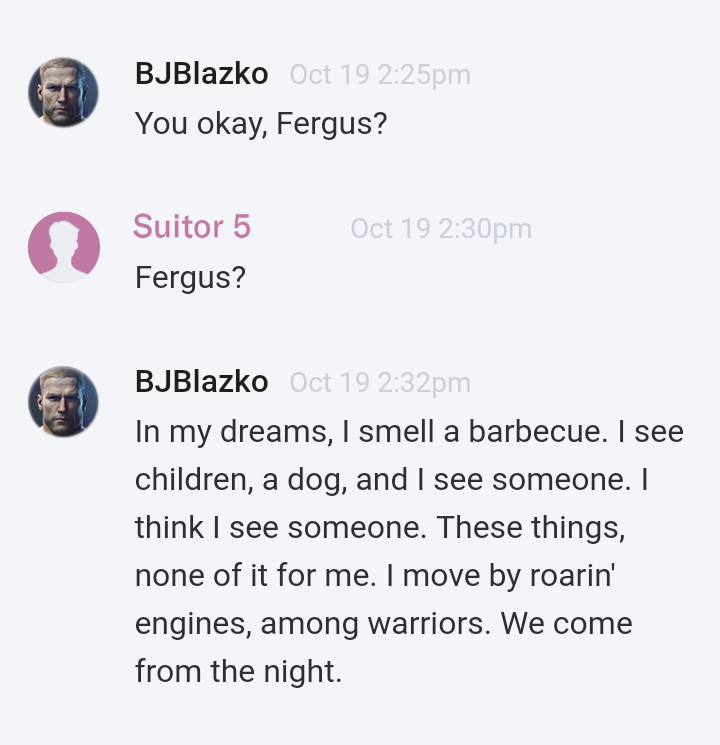 Not only did he completely mess up this woman’s name, he also accidentally started typing out one of his internal monologues. What would she think to this? 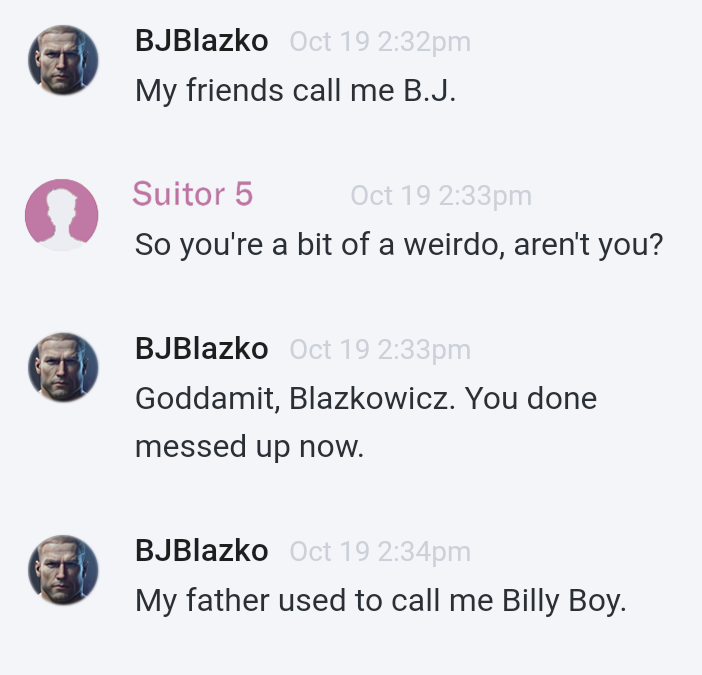 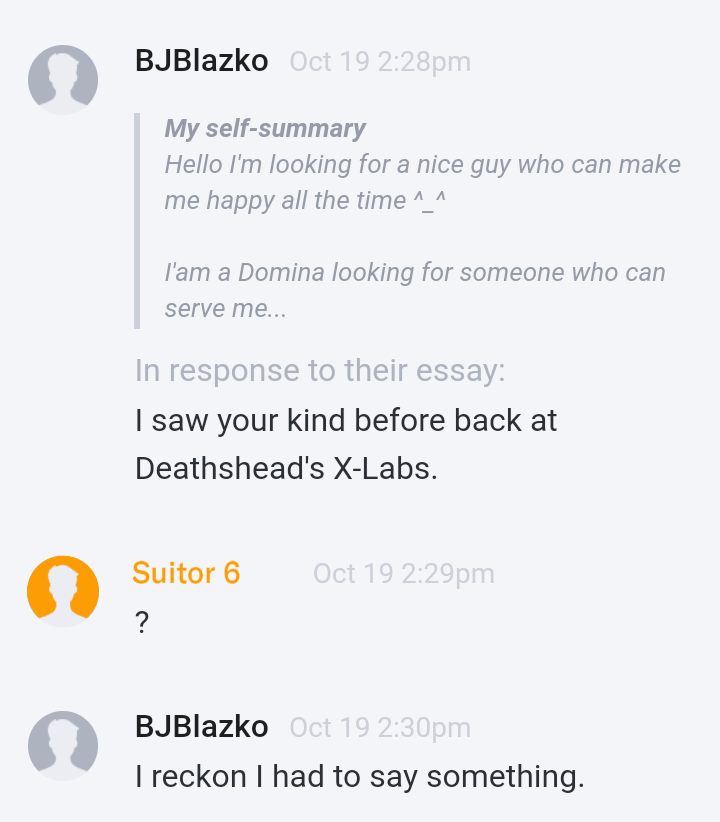 Luckily, this wasn’t it. She was intrigued. All B.J. had to do was tell her he was into the same lifestyle, not say anything bizarre, and he was in there. 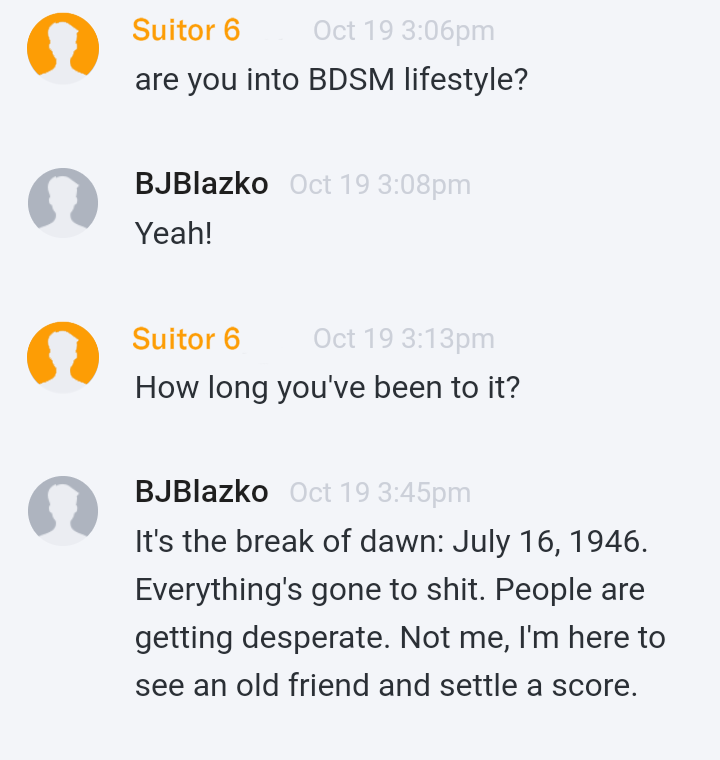 That put an end to that.

He would have one more go, this time taking care to not compare them to a Nazi experiment. He would introduce himself formally. 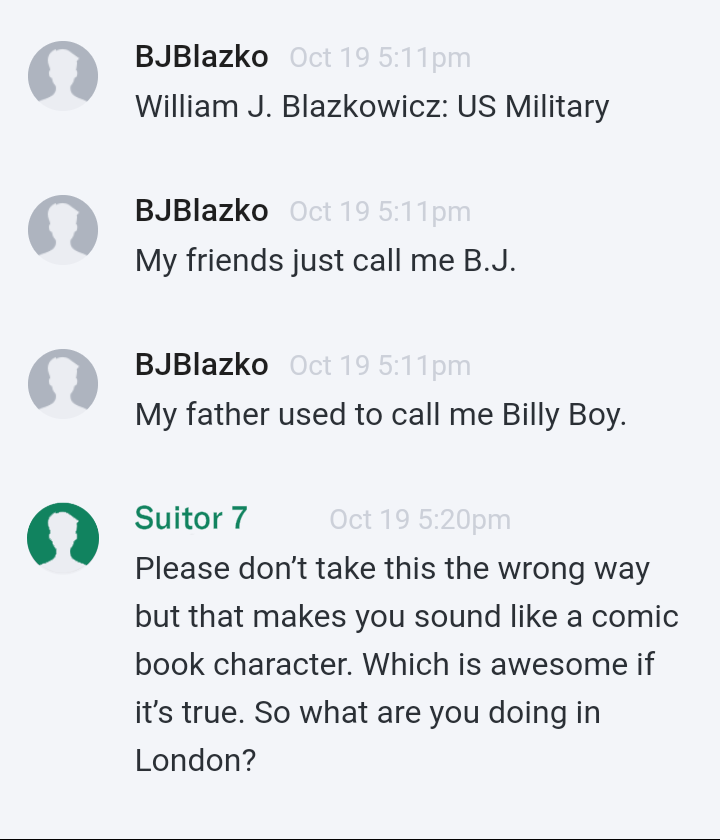 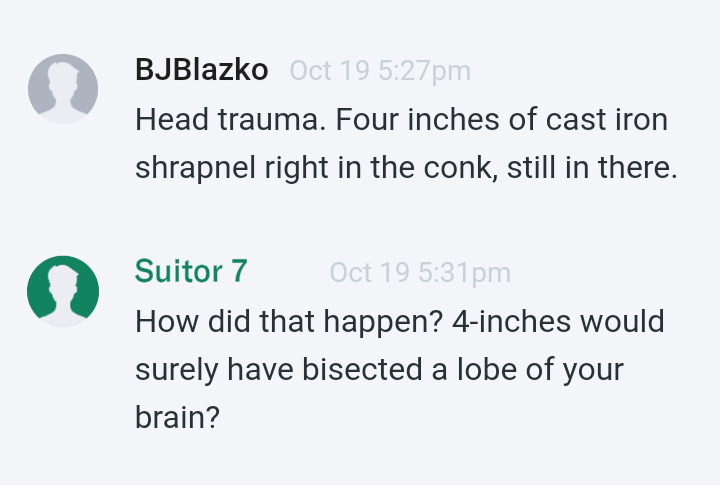 It’s a valid point. He just needed to address the injury and be honest. 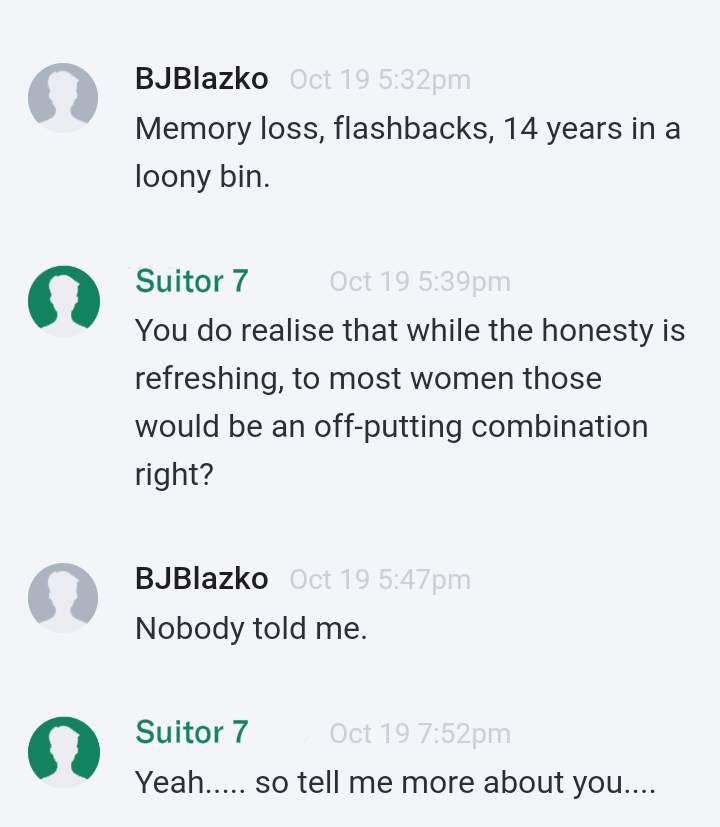