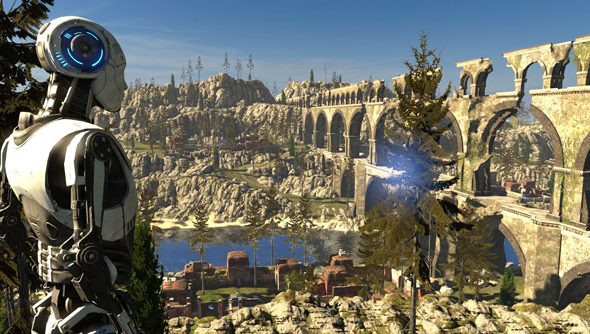 Unless you commit your life to reading philosophy, it’s not easy to spend three hours reading ten pages of Gilles Deleuze’s expatiations on identity and difference, work through Plato’s Republic, or even flick through Sophie’s World and its gentle thought experiments… especially if you’re a committed gamer.

Grand and cerebral your style? Find more in the best games on PC.

Videogames have traditionally been a great way for escaping the rigours of reality, rather than asking the big questions about it. But as the medium’s evolved, developers have come to use it as a vehicle for their philosophical musings. What is consciousness? Do I have free will? What the hell am I actually doing when I play videogames?

Through their unique type of interactivity, games have carved out their own way of exploring both new and established philosophical ideas, and here are seven games that will make you ponder life, the universe and – obviously – gaming itself.

NB: It shouldn’t need saying, but SPOILER WARNING for many of the games listed here.

The Stanley Parable – Free Will vs. Determinism 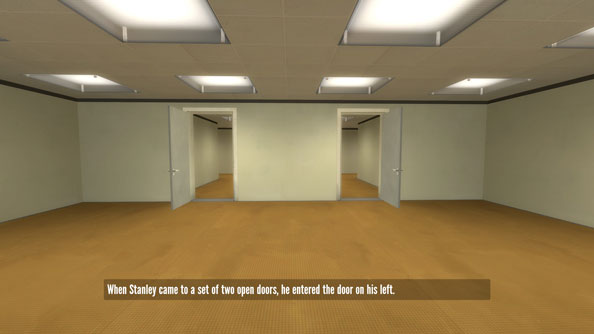 You’re facing a pair of doors in a bland beige office building, and the comforting Stephen Fry-like narrator tells you that “Stanley (that’s you) goes through the door on his left”. But whether Stanley does indeed go through the door is up to you. Do you follow his instructions, or do you mischievously defy the narrative that’s ostensibly laid out for you? In this scenario, is there such a thing as a ‘right’ or ‘wrong’ choice?

That tension between following the narrator’s instructions and attempting to carve out your own path lies at the heart of The Stanley Parable, as your various combinations of decisions lead to inventive, weird and sometimes existentially terrifying scenarios – ranging from ‘happy’ endings for following the narrator’s instructions, to forays into the world of Minecraft, to mindbending suicide scenarios. Your choices – and the narrator’s constant reminding of them – make you question what your role as a gamer actually is, and how much autonomy you have in the process. In that sense, it’s the ultimate meta-game.

Expanding on that, The Stanley Parable is neat little play on determinism, the idea that our actions are defined by a multitude of historical, social and logical factors leading up to any given moment – essentially, whatever choice we make is inevitable. By highlighting the rules and restrictions governing us as we make these carefully choreographed ‘choices’, The Stanley Parable empowers us with an understanding of free will – or lack thereof.

The Witness – Zen, Science and Spirituality 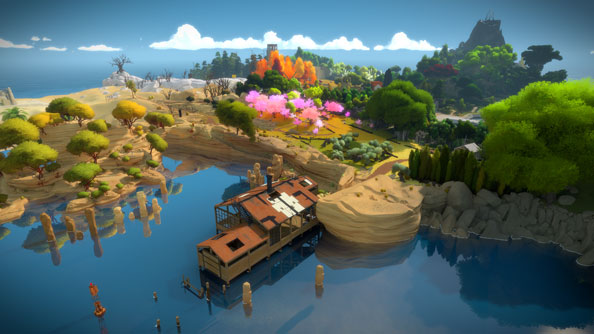 At first glance, it’s hard to make the connections between The Witness’ knowingly synthetic squiggly-line puzzles and the musings about science, religion and spirituality, and their respective quests for some kind of ‘truth’ that you find scattered all over the island.

But as you progress to the later puzzles, The Witness becomes more and more a game of observation, of being present in the moment and not looking for some kind of universal rules that conveniently glue it all together. Even in the middle of one section of puzzles, the rules may suddenly shift without you realising, and you’re constantly forced to overrule the view that you previously thought correct.

The puzzles in The Witness defy our attempts to find a convenient catch-all way of solving them, just as the profound yet often conflicting monologues in the audiotapes and videos don’t offer an all-encompassing explanation for their questions about God, faith, and the universe. Instead, in a truly Zen fashion, The Witness wants us to use observation to harmoniously combine its messages with our own experiences and intuitions, encouraging us to not become fixated on a single idea or puzzle-solving method as being the ‘correct’ one. 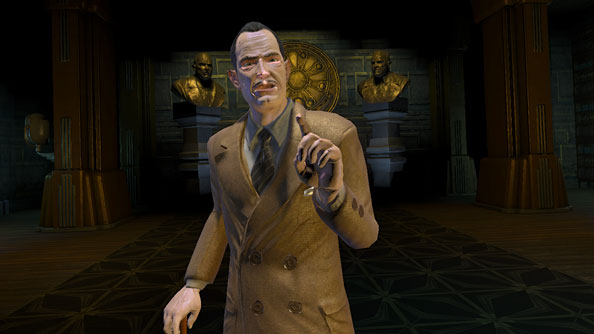 The whole ‘who’s really pulling the strings here’ fourth-wall break is now steadily veering towards cliche, but when BioShock did it back in 2007 it was nothing short of jaw-dropping. When the founder of Rapture, Andrew Ryan, reveals late in the game that you’ve been nothing but an automaton all along, ordered around by a trigger phrase to carry out the bidding of others, it makes us completely reevaluate our relationship with games. In Ryan’s words: ‘A man chooses, a slave obeys’, and we were very much the latter.

And that phrase neatly flows into the critique of objectivism at the heart of the game. Ayn Rand’s controversial philosophy states, among other things, that people should be free to pursue their personal ambitions and ventures, and that the only way this can be achieved by a free market capitalism completely absent state intervention.

The underwater city of Rapture is the realisation of that vision – an individualist utopia bringing together enterprising people to form a ‘free’ and unregulated society, where even the police department is privately owned. Eventually, the availability of the destructive gene-altering substance ADAM, combined with inevitable growing social divisions resulting from inequality, brings about the downfall of the city, suggesting that maybe a society based on Randian ‘rational selfishness’ isn’t the best way to go. 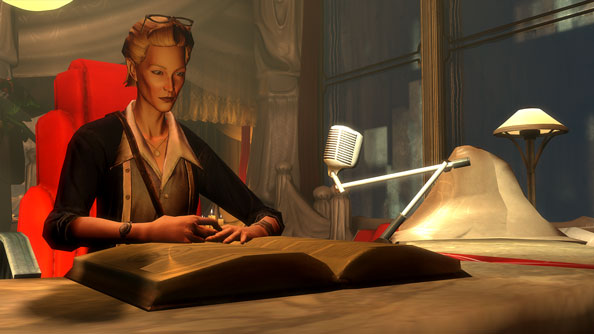 Everyone loves to talk about how ingenious and thought-provoking BioShock was, with poor BioShock 2 getting kind of brushed under the carpet (or, er, thrown out to sea?) as a result. Sure, on a gameplay front it may have been too similar to make as big an impact, but its story was no less profound – and was in many ways a natural accompaniment to the first game.

In the same way as the original targeted hardcore individualism, the sequel dissected what’s arguably its polar opposite, utilitarianism – the idea that any action can be justified so long as it ultimately benefits the greatest number of people (or the ‘greatest-happiness principle’, as philosopher Jeremy Bentham coined it). Embodying this philosophy is Dr. Sofia Lamb, the psychiatrist who takes over Rapture (or what’s left of it) after Ryan’s death and builds a cult of personality around herself, framing her as the city’s saviour.

Lamb tries to enact her corrupted collectivist views by creating ‘Utopians’ – people injected with the genetics memories of the entire population of Rapture – who should altruistically meeting the needs and desires of a the whole city.

But the results are disastrous, with the memories and individuals’ needs driving the first Utopian, Gil Alexander, insane and despotic. Inevitably Sofia Lamb’s seemingly selfless vision becomes – like so many similar-minded leaders before her – completely megalomaniacal. 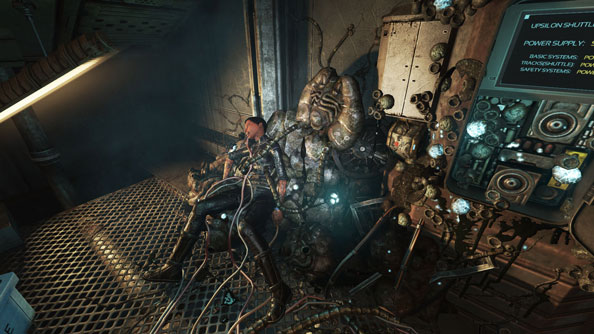 The subaquatic psychological horror from Frictional is a little more cerebral with its shocks than previous title Amnesia: The Dark Descent. Taking place after an apocalypse has wiped out most of humanity, you awaken in a science lab at the foot of the ocean, where the remnants of humanity still survive, and robots imbued with human consciousness reside in its creaking-and-leaking corridors.

The robots you encounter are broken, decaying and tragic, each with their own unique personalities. As you interact with them, you’ll be constantly forced to shift and redefine whether you should interpret them as human beings or whether they lost that title when their consciousness was moved to machinery; can you be human without a body or the fear of your own mortality?

Soma brilliantly throws this conundrum at you time and again, presenting you with disturbing and often heart-rending (or not, depending on your stance towards AI) situations that make you question humanity’s relentless drive towards immortality – a drive that has created a world in Soma where human consciousness is pathetic, broken, and disembodied.

The Talos Principle – Existentialism and Consciousness 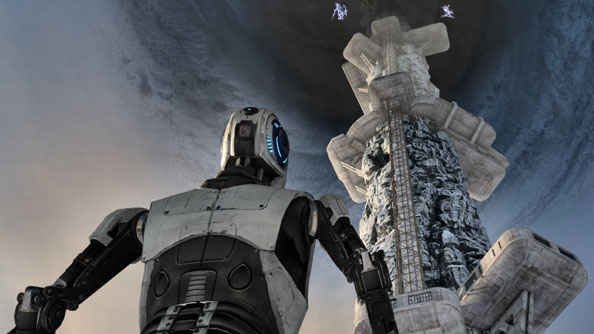 The Talos Principle is a puzzle game from Serious Sam developers Croteam (who’d have thunk it?), which casts you as a robot in a simulation of increasingly challenging puzzles. These are interspersed with testing philosophical and religious ideas presented to you by a computer. The general thrust of the questions is about whether consciousness is grounded in action and interaction with the world, or a metaphysical abstraction that’s exclusive to us humans.

Guided by the god-like voice of Elohim, you undertake puzzles that gradually take the robot from artifice to fully-formed consciousness. To attain it however, you need to defy Elohim and climb the tower he commands you not to, essentially killing him and lifting the robot out of simulation and into an enlightened reality, where its job is to keep humanity alive long after ‘biological’ humans have become extinct.

The plot touches neatly on Nietzsche’s Thus Spoke Zarathustra which, with the famous ‘God is dead’ line, calls for humanity to do away with deity worship so that it can attain enlightenment in a world free of religion.

Dark Souls – Existentialism and The Absurd 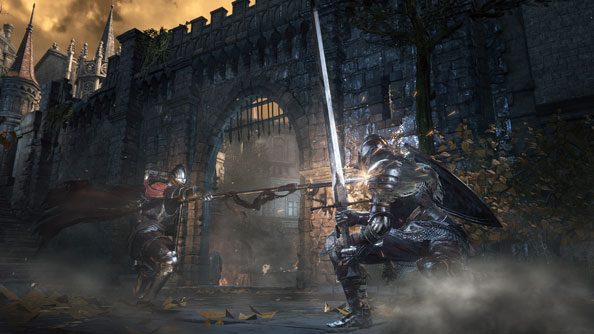 Remember Sisyphus? The poor guy was condemned by Zeus to repeatedly push a boulder up a hill before seeing it roll down again for all eternity (ancient Greek gods really were bastards). You can probably relate to him a little bit when playing Dark Souls – a game that, through its gameplay and narrative, is about endless cycles of death and rebirth, and fire and darkness.

It feeds right into existentialist philosophy, particularly relating to ideas of the absurd – the idea that life is meaningless and the universe is indifferent to our plight. Albert Camus suggests that awareness of this fact can drive us insane (presented in Dark Souls as ‘going hollow’) or to suicide. Despite futility, we need to fight against the temptation to lose hope. In Dark Souls, we are Sisyphus, and as Camus says, we “must imagine Sisyphus happy”. Just got killed 20 times by a boss? Embrace it, accept that you’ll probably die another 20 times, and keep going.

Then there’s the story itself, which tasks you, a Chosen Undead, with toppling a group of archaic Gods. It feeds once again into Nietzsche and the Ubermensch – the idea of the ‘superman’ or ‘superhuman’- who overthrows the outmoded deities that have ruled the world for so long, and embraces the meaningless, non-spiritual world in all its absurdity.

At the end of the game, you can decide whether to let the light of the gods go out to herald in the Age of Man, or keep it going for a little bit longer to keep up the illusion of the gods continuing to have power. In true existentialist fashion, the choice is more or less meaningless, because the fire will fade sooner or later anyway.

Got any other great examples? Debate away in the comments below.