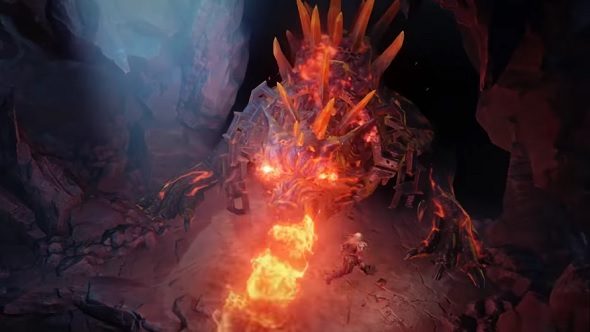 Taking footage from the latest build of their Norse hack and slash, Kalypso Media have cut together a new combat trailer for Vikings – Wolves of Midgard. Set following the dreadful battle of Ragnarok, Vikings – Wolves of Midgard has players fighting against fearsome frost giants and undead creatures as they try to keep their village alive during the cold of Fimbulwinter.

For more co-op action, gaze upon some of these top PC co-op games.

As either a Viking warrior or shieldmaiden, Vikings – Wolves of Midgard can have players team up in online co-op to destroy the vile beasts that threaten to destroy what’s left of your homeland. Killing enemies grants you blood, which you can sacrifice at special altars to gain powers from the gods. It’s all suitably metal, as you can wield ridiculously sized axes, hammers and swords to cut pig demons and trolls in half.

Travelling between the realms of Nilfheim, Midgard and and Balheim, warriors will collect pieces of legendary weapons and armours to help them continue the fight, as well as gathering resources to help rebuild your ruined village. For a real challenge, players can take on the ‘Trials of the Gods’, which award brave Vikings with the best equipment and runes. After completing the campaign, you can continue onto Valhalla in the form of New Game +, which will truly test your mettle as a Viking.

Vikings – Wolves of Midgard will be available on Steam sometime in early 2017, with players gaining a 15% discount if they pre-order the game ahead of launch. The pre-order also gives you access to an additional outfit for both Vikings, along with extra beard styles for male Vikings and additional tribal jewellery for female Vikings. You also gain access to a special digital artbook, along with the game’s soundtrack.