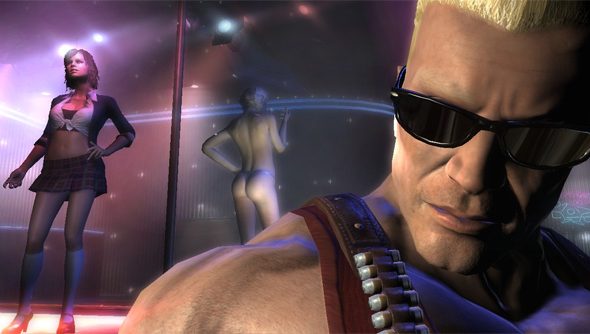 Jon St. John, voice actor behind such notables as Big the Cat and Duke Nukem, isn’t a fan of guns and violence. That’s great, of course. Guns and violence make terrible bedmates, causing the dual annoyances of loud noises and death. Speaking on the wonderful Unlimited Hyperbole podcast, Jon St. John spoke candidly of his dislike of guns, videogame violence and, rather crucially given that standpoint, how voice actors shouldn’t take absolute creative responsibility for the characters they voice.

“I don’t care for guns in general,” says Jon St. John.”And it bothers me in [the USA]how free we are to bear arms. They say ‘guns don’t kill people, people kill people’. Well no, I think people with guns kill people. Quite frankly I’d like to see stronger gun laws in this country.So you know, shooting and killing in general — hell, I don’t even like hunting. I don’t like people out there shooting deer or elkor whatever. Unless they’re doing it to survive. If they’re using every part of the animal in some way, then great,but if they’re killing it justto kill just disturbs me.”
“I like flying, racing, driving games more than first person shooters,” he concluded, “And gratuitous violence, like Grand Theft Auto? Not into those kind of games at all.”

The man is keenly aware of the conflict between his own views and the character he most famously portrays, however. “I’ve been connected to Duke for so long, and even though I’m on 150, 160 odd games all in all, Duke Nukem is the one character who really made me famous in the industry. A few times at conventions I’ve had guys come up to me and say ‘man, you’re so badass’. But I’m really not. That’s why I hesitated when you asked me aboutguns. I don’t want to disappoint fans.”
Listen to the full episode of Unlimited Hyperbole here.