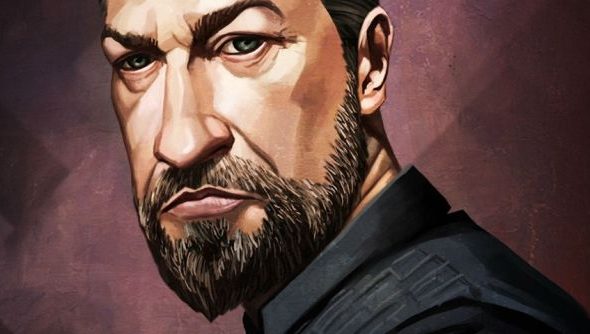 It’s customary for Andy Serkis to change faces between roles, and he’s taken one with a roman nose and pointy beard for his latest, in Mike Bithell’s Volume. This time the mo-cap mogul will be Guy Gisborne, a villainous CEO who runs England as a company.

Volume is a hyper-contemporary retelling of the Robin Hood legend. Serkis’ character is named after the folkloric Guy of Gisbourne – and we imagine potential spoilers lie on that Wikipedia page.

Traditionally, Gisbourne has been an assassin hired to kill Robin Hood, and occasionally the third party in a love triangle with the hero and Maid Marian.

Wallace returns after a well-liked turn as the narrator in Bithell’s game about sentient blocks, Thomas Was Alone.

Serkis is hardly new to games, either – he had a good thing going with Ninja Theory across Heavenly Sword and Enslaved (as a monkey, obvs).

Volume will be out on PC next year, a month after it comes to PlayStation machines. Are you intrigued by its brand of fast-reset stealth?