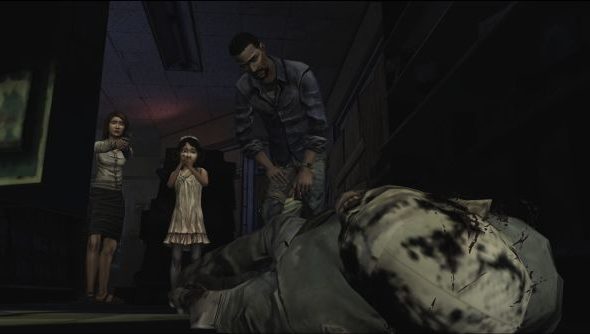 It’s never about the zombies, not if you’re doing it right. The zombies are the backdrop that creates the interesting scenarios. They push people to do extraordinary things, or to devolve into the animals that we strive not to be our entire lives. Characters get thrown in an enclosed space, bottled in their with a rotting, brain-hungry cork and then given just the right kind of stress that builds pressure like a deep sea dive. Incredibly, TellTale seem to have understood this, and avoided making a game where you’re just waiting for the next zombie attack whenever a conversation pops up. They were always far more concerned with thinking and talking rather than acting, and with the zombie genre so saturated with mass-zombie murder simulators, it’s refreshing to see that pressure pulled back to allow the characters some room to breathe.

Doubly impressive is that this is a game that stands entirely alone from the television show, which, as popular as it is, has its own set of problems. There are references and even a pair of characters that come out of the show, but there’s no signposting, no big, handwaving moment that screams ‘Hey look at this! This is from that thing you watch!’. It’s merely the same world, and a few familiar, but highly stylised, faces.

The Walking Dead opens with you, as Lee Everett, stuck in the back of a police cruiser. This being the zombie apocalypse, you never quite make it to your destination, but from the conversation that takes place between you and the trooper, that might not be such a bad thing. Although trading bars for the hungry jaws of the undead is probably not the kind of choice you’d want to come about. The most interesting part of this is that it’s entirely for your benefit. This isn’t a conversation with consequences, nor is it one that changes any stats or is even ever referred to after the fact. It’s just there to give you a little background on Lee (although without actually out and out saying what crime he committed or why he committed it) while letting you establish the attitude you’re going to go with from this point forward. It’s only with the introduction of Clementine, a little girl that falls under your care and, more importantly, your influence, that your words start to have an exterior effect.

So there’s five hundred words without even talking about caving in a zombie’s head or having that fatal bite fall into your shoulder. Or even watching another person meet that grisly fate. The Walking Dead does have plenty of action, and even after that five minute introductory conversation you’re straight to the zombie killing, albeit with a Tell Tale twist. Instead of requiring you to have a quick finger instead it requires a quick mind, figuring out how to deal with the shambler headed your way rather than specifically doing the dealing. Improvised weapons are leaned on heavily, especially during a sequence in a Motor Inn, where sound is a death sentence and you have to deal with multiple undead without having any of them realise you’re there.
But even then, during those less conversation-driven moments, the emphasis on character shines through. You need to create a distraction, and the techinically-minded Doug helps you reprogram a remote control to work with televisions across the street. You’ve got a pillow but you’re not exactly going to be able to smother a zombie to death, so Carly, the quick-shot journalist, turns it into an improvised suppressor and you pop off a silent shot without alerting the rest of the walkers.

The puzzles themselves are a mixed bunch, unfortunately. Some are simple enough, but others rely more on you turning on the ‘Hot Point Indicator’ that shows you exactly what can be clicked on, so that you know that no, you can’t use that cane with a hook to grab the thing out of reach, but instead have to use the axe. Things that make sense don’t always make sense within the game world. And gaming it with a HUD Indicator feels cheap, and unsatisfying.
The HUD elements themselves are an odd one. When you start up the game, you’re presented with the choice of playing with Simple or Standard indicators, with Simple giving you barely anything but the reticule tied to your mouse, and standard giving you, well, everything. And everything is probably more than you want.
I don’t need to know that Glenn notes that I disagreed with him when I disagree with him. Or that Carly thinks that I trust her when I just said that I trust her. The only purpose for those indicators to flash up is because quite often there isn’ta reaction to something you said, and in a way, that kind of ruins it. It just snaps you out of whatever immersion you’re bathing in, making you realise that there are systems in the background, taking note at the appropriate times. I want to know those things when it matters, when someone makes a decision, or says something, based on what I said. Not the instant I said it. I’m not a creepy, voyeuristic psychic. I’m just glad that it’s a toggle-able option in the menu. Being the first episode of five, it was always going to be a game about beginnings, without any of the powerful ripple effects you might hope. But the writing and voice acting are strong enough that you actually give a damn about these characters, and when you’re forced to make choices that can very well result in their deaths, it gets tough. Those moments, as sparse as they are in the two hours or so of this first episode, are what make the prospect of following this story a compelling one for the player, rather than just a viewer.It’s this immediacy of character that lays out exactly what Tell Tale are trying to do. It’s at least five minutes before you even see a zombie, and everything up to that point is you deciding whether you want to be the reticent, remorseful convict, or the kind who has an attitude problem and sees himself more as a victim of the system and circumstance. That this is all dealt with rather deftly through a conversation where even silence is a valid option is surprisingly engaging.

The Walking Dead runs fine for the most part, except for a few moments when the numbers of zombies starts to get too much for the engine and the framerate drops. Much more frustrating are the universally muddy textures, no doubt a hangover from the simultaneous console release. Similarly, lots of the HUD elements seem tailored for the gamepad, rather than mouse and keyboard, especially when it comes to the cursor, which is sluggish and moves in strange and mysterious ways in relation to the camera. It’s easy to get used to, but is a little disconcerting at first.