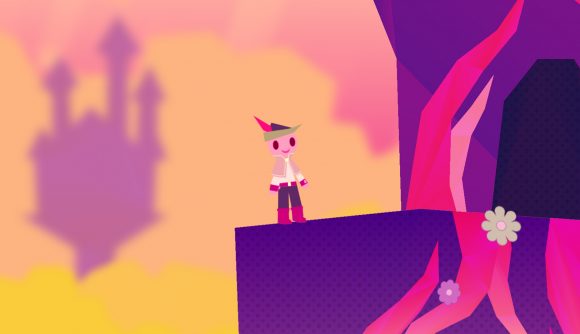 Indie musical adventure Wandersong has a problem, but it’s a problem just about any other game would love to have – players like it just too darn much. Early user reviews have been almost universally positive, and it’s been such a swell of nice responses that Steam doesn’t believe it’s real.

That means some of Wandersong’s basic Steam features still aren’t enabled months after release. Most notably, you can’t currently get trading cards – that’s a common protection against low-effort Steam games built to let players idle and profit off card resales. Achievements are also temporarily limited while Valve’s algorithms work out what the deal is.

A “Steam is learning about this game” message has been on the store page since the game’s launch back in September, as developer Greg Lobanov noted today on Twitter. In a follow up, he says this approval process is “totally algorithm based,” and that “most games seem to have the flag removed almost as soon as they launch. But because our reviews are so suspiciously good, we’re still in review months later. Statistically speaking, our game doesn’t exist and everyone who likes it is an account we hacked.”

Wandersong currently has 269 Steam reviews, and only three of them are negative. (Even those few thumbs down opinions offer pretty faint criticism.)

The critical consensus on Wandersong is pretty similar, though not quite so overwhelming, as the game holds a respectable 84 on OpenCritic.

Related: The best indie games on PC are definitely real

As Lobanov says, “we’re just so good it’s statistically improbable that we’re real.” Hopefully Steam’s algorithms will wise up sooner rather than later – we wouldn’t want anything to hold back a game with such suspiciously extravagant praise.