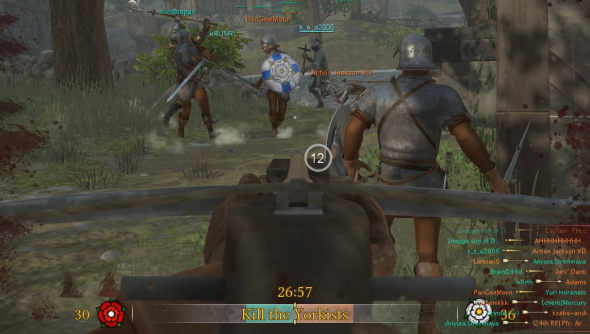 After a warm critical reception last month, and with its servers now packed with thousands of players, War of the Roses has established itself as the definitive in mass multiplayer melee. Publishers Paradox have thrown their weight behind the game and granted it the lordly title of “franchise,” meaning we can expect to see continued support in the form of regular updates and improvements. The first of these is set for next month, and I spoke to Senior Producer Gordon Van Dyke about what we can look forward to.

Despite
its popularity, one of the most common criticisms of War of the Roses


has been that it lacks variety. The proposed single-player campaign was
cut and multiplayer game modes are limited, so it’s no surprise that
this update will introduce the first of several new game modes. Pitched
Battle takes away your ability to respawn, meaning each player has only
one life, and it’ll be available to play in its beta form from early
next week. Meanwhile, developers Fatshark have also considered modes
based around sieges or assaults.

“We
have an ‘attack’ style game mode we’re working on,” says Van Dyke, “and
in addition to the ‘Pitched Battle’, we do have something [else] very
cool we’re experimenting with. Until we work it out, we can’t reveal
anything, but if it works it’ll be awesome! We’d love to add a single
player component as long as it makes sense and adds value to the game,
but this is a multiplayer game and expanding as well as improving that
takes priority.”

Naturally,
the game’s extensive arsenal is just begging for new and even more
wicked weaponry, but the developers aren’t keen to flood the game with
arms and armour just yet. Van Dyke describes the current weapons as
“very well balanced” and wants to keep things not only fair, but as
realistic as possible, adding that Fatshark “paired up with a real
swordsmith to release accurate weapons.” While all of these new items
can be unlocked by spending experience points, you’ll also be able to
purchase in-game currency to fast-track your way to getting what you
want.

The
coming update will be fairly modest on this front, introducing seven
new weapons alongside just one set of heavy armour and a single helmet.
Players can expect to get their hands on a halberd, a gothic mace, a
horn spanned crossbow, a new arming sword, an Italian side sword, a
rondel dagger and a pollaxe used by the Knights Hospitaller. The heavy
armour also comes from the Knights Hospitaller and is a sign of the
game’s growing historical scope.

“We
plan to explore different sub groups that existed during this time,
like the Knights of Hospitaller,” says Van Dyke. “We also have a lot
more to explore within the Wars of the Roses since we focused only on
the first half.” Going some way toward that, the new update introduces
two new wintry battlefields based on the Battle of Wakefield, in
December 1460, and the Battle of Towton, in March 1461.

While
adding more toys is one of Fatshark’s priorities, the growing
popularity of War of the Roses has given them other considerations . Van
Dyke plans to add more tools for server admins, features that will help
support esports and, with an awareness that some players are going to
try to cheat, ways to catch hackers. “It’s a very big concern for us and
all our servers are VAC enabled,” he explains. “We’re also testing a
sniffing tracker on servers to help identify those using speed hacks
that are more common. We’ve actually had our QA team use some hacks in
testing to help us combat them.” With
this first update, it doesn’t look like Fatshark are falling over
themselves to expand things in the way that some players have demanded,
but instead want to carefully manage the growth of the game. For now,
Van Dyke is starting with a “small and lean” team who will “mature” the
franchise one step at a time, and though he’s not yet got plans to
expand the medieval melee beyond England’s shores, “We are absolutely
looking into other viable settings, there’s just so many it’s hard to
pick.“