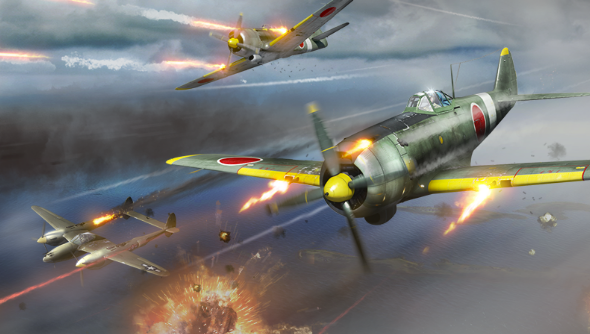 Pilots in the War Thunder air unit, run to your stations! Update 1.37 has had its safety check, fuel put in its tank, and is now ready to take to the runway. It is loaded with some very useful cargo, including the ability to host custom battles on dedicated servers, and an entirely redesigned progression system.

Update 1.37 is one of War Thunder’s largest ever updates, clocking in at 2GB. Chief among its changes is a new progression system that reduces the game’s 20 ranks down to a simple and streamlined 5. No longer will you be slaving to unlock individual modules on each plane to progress to the next level of research. Instead you can start research on any plane you choose, but having the entire tier of modifications on the previous aircraft unlocked will lead to a research boost.

Airplanes available at the start have been reduced in their combat abilities, meaning you’ll have to strive to research and develop new craft in order to excel in War Thunder. Twenty two new planes have been added in Update 1.37 though, so no doubt you wouldn’t want to stick with stock planes for too long when you can fly around in a German plane with a 75mm tank-buster cannon mounted on the nose.

To ensure the battles are as historically thrilling as possible, Gaijin have altered the flight and damage models of more than 70 planes. Not only that, but some have had their weaponry changed up. For example, you’ll now find the B-17 bomber carrying less payload than it used to.

If you’re a bit confused on the main menu post-patch, it’s because the game modes have been renamed, apparently in an effort to ward off confusion in new players. Arcade battles are still Arcade, but Historical Battles are now Realistic Battles and Full Real Battles are now Simulator Battles.

Setting up a custom battle will no longer host the game on your local machine, but push the game to one of Gaijin’s dedicated servers, resulting in cheers from everyone and completely stable gameplay, no matter the power of the hosting player’s connection.

War Thunder also gets a spray of the pretty powder with a new renderer with DX11 support, offering a 25% performance boost on some video cards.

And finally, eight new maps have been added. Hooray! Check out the trailer above to see some of them in action, and read the patch notes for all the nitty gritty.