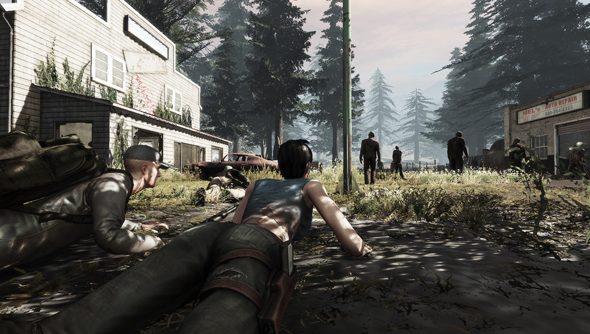 If imitation is the sincerest form of flattery then Hammerpoint Interactive have all but constructed a shrine to Dean Hall. When I first sat down to play The War Z I resolved to not draw lazy comparisons between it and Hall’s DayZ. That didn’t last. The similarities are so striking that they’re impossible to ignore.

Both The War Z and DayZ share the same gameplay mechanics, UI elements and iconic locales. War Z is a survival game set in a zombie apocalypse; in this instance taking place in Colorado.

Regardless of whether or not you’ve experienced DayZ, though, it’s worth stating this upfront: yes, there is room in the industry for two or even two dozen zombie-survival titles but right now, with the DayZ mod still going strong, the DayZ standalone game on the horizon and The War Z still yet to implement some of its most promising-looking features, there currently isn’t room for both in yours or my game collection.
So: how does War Z compare. Why should you play it?
For those who have experienced neither title, there are mechanical differences between the two that foster different play styles. Where DayZ offers the option for players to survive in the wilderness, living off the land, The War Z seems more intent on forcing players together, be it to clash over essential resources or to form fleeting alliances to achieve a common goal. This lends a more traditional and harder to avoid PvP element to The War Z. Despite a current server limit of 30 players, it’s common to encounter other survivors going about their business. In part, this is because War Z’s current Colorado map is much smaller than DayZ’s Chernarus. Every player is armed with a map right from the off that tracks their current position, making it impossible to get lost. With many locations named on the map, newly-spawned players are given a purpose and a choice of places to head toward right from the off. This eliminates fruitless wandering, but it also deprives players of the wonder of stumbling across many locations by chance and it increases the likelihood of running into other players. Whether or not this is a notion that you savour is the difference between finding The War Z to be tense and exciting or frustrating and overcrowded.

As a standalone entity and not a mod for a three-year-old game, The War Z benefits from a painless install and stable servers. Players can jump in with a minimal of fuss, a real plus for those that may have experienced issues attempting to install or run DayZ. Visually, it’s more polished than DayZ and is capable of moments of quiet beauty; particularly as the sun sets behind the mountains or plays across a lake.

Hammerpoint have been working overtime on the creation of a world that looks like it’s gone to hell. A collapsed overpass acts as the final resting place for husks of long-abandoned vehicles while the remote airfield boasts the metal corpses of two downed cargo jets that bear silent witness to the downfall of the human race. More affecting are the notes dotted around the world that hint at the horrors of a mother trapped with her two children in what is now a blood-smeared RV or the hopelessness of a lone construction worker as the world around him dies.Just remember that it’s a work in progress and there are still issues to be resolved. One such example is the oddball inventory system. It follows DayZ’s lead of different sized backpacks that dictate how much gear can be carried. While less fiddly than DayZ’s inventory, The War Z currently features an impractical quirk that allows for multiple items of the same type to be stacked, even when there’s no room for new items. Having your avatar merrily collect 15 bottles of water that occupy one inventory slot but then refuse to stash a granola bar for supposed lack of room is foolish and necessitates protracted and repeated inventory juggling.

Combat offers some highlights, such as the strategic notion that melee attacks should be aimed at the head to most effectively put down a zombie, while a scarcity of ammo makes every shot count. However, the undead of Colorado seem to have an implausibly long reach, which allows them to land attacks where they have no business to do so should you try to scuttle past them.

And so it is with The War Z: for every interesting idea or intelligent feature it brings with it some baffling choices where it seems Hammerpoint has so far refused to build on solid ideas or has been incapable of avoiding some glaring clichés; invisible walls and impassable water barriers smack of a hastily constructed game world. Practical frustrations aside, The War Z has plenty of stories to tell. Players will remember surviving a desperate raid on an isolated farmstead or the perceived injustice of creeping around an abandoned airfield in order to secure some worthwhile weaponry only to be cut down moments later by their fellow man. But for the most part these are stories that we’ve lived through before from time spent with DayZ.

There’s more to come: The War Z has some genuinely exciting features waiting to be implemented: there’s a hardcore mode for survivalists that offers the nervous excitement of permadeath. That should combine well with the currently inaccessible skill tree and experience point system that hints at meaningful character progression. Its marketplace, that could have risked disrupting the game balance, offers only cosmetic items (and reveals Hammerpoint’s penchant for headgear) alongside the survival basics such as food, drink and medical supplies. Crucially, it offers no high-power weaponry.

The War Z is a work in progress. It’s yet to reach its full potential, but there are reasons to visit its sun-drenched Colorado state. Those reasons multiply for those that haven’t played DayZ. Bohemia Interactive’s DayZ standalone is just around the corner. Hammerpoint needs to move fast to implement some of its most promising features or risk being left for dead by the very title to which it owes its genesis.