Warframe is an oddity; but a popular one. It’s a third-person action shooter set inside spaceships. A free-to-play co-op romp where you shoot grimy alien things, and earn XP and credits to be spent on upgrades between missions. Think of it as an early free-to-play prototype of Bungie’s forthcoming Destiny: a cross between Borderlands and World of Tanks set on spaceships. Where everyone wears shark fins as faces.

It works… kind of. Works enough to send it to the top 10 on Steam’s most played list during it’s open beta period. But not enough to hold my attention beyond the first few hours.

You play as a sword wielding space ninja thing: you’re given simple objectives to storm a space-ship and cause havoc. You’re accompanied by three friends, or three matchmade internet humans. You carry three weapons: a rifle, a pistol and hammer or sword for melee. The missions aren’t particularly varied: kill a boss, or kill many baddies, rescue and escort a prisoner… the kind of objective that can be easily scripted and presented, and completed in around 15 minutes.

They’re enjoyable. If you choose to solo the missions, you’ll be left bored. There’s just not enough variety in the way enemies choose to attack to make them interesting. But with four people romping through the cavernous fighting spaces, you’ll quickly discover that it’s quite fun. You can blitz through enemies at a fairly furious pace, and rattle through the rooms without pausing. It’s not perfect: the melee actions are clumsy, and the weapon noises don’t have the right kind of heft, but stuff falls over in a shower of experience points and that’s basically enough.

There’s a nod to fast-paced action games like Devil May Cry with the hint of some more complicated movement options. You can occasionally flip of the edges of balconies and boxes, and wall-run, all though in practice, I only used the occasional jump and heavy downward slash to do area damage. 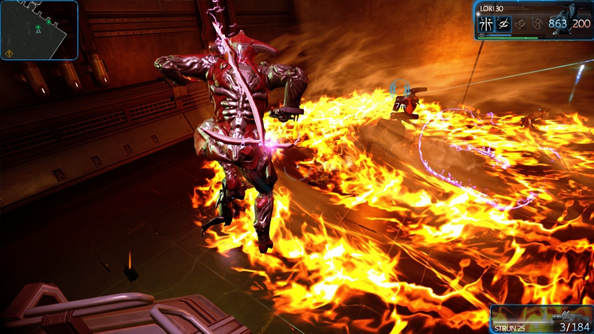 Warframe’s powered by Unreal Engine 3, and Epic’s tech is doing what it does best* the Evolution engine, and it works creating atmospheric rooms lit by glowing computer screens and plasma bolts. It’s rendering an unusual art-style: while the rooms and ships you fight in could be transplanted from any space-horror game you’ve played; think Doom 3 or Dead Space, the characters and enemies are more organic than robot. They’re bulbous and grotesque, and split apart with a pleasing spray of gore and flesh.

But there’s plenty wrong with Warframe.

First of all, the level design is a disaster. When you’re fighting, Warframe is fun. But a good half of your time in the missions is spent trying to work out where the exit or door to the next room is. This is a disaster for the game’s pacing: when four players are trying this, it’s often a case of herding cats. Annoyingly, the level designers have seen fit to hide passages behind breakable materials (you can occasionally break through into an air-vent, for instance). It’s not helped by players being able to lay down a waypoint by hitting a key: that waypoint then overwrites the game’s automatic waypointing. Nor is it helped by the game’s lack of visual variety: there’s only so many chrome and metal space engine rooms you can work through before you start to lose any sense of direction. 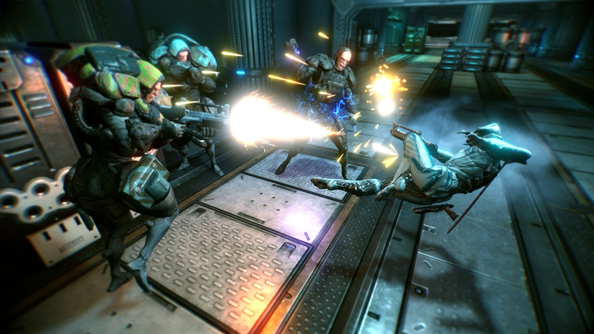 What Warframe desperately needs is a glowing line on the floor that shows the most direct route to the next objective; if players want to deviate and explore, they can. This is not an idle problem: I think that most of my frustration with Warframe comes from the amount of time I spent trying to find the next door.

It doesn’t help that the AI enemies aren’t much fun to fight. There’s no cover-system mechanic, even if the enemies make a half-arsed attempt to hide behind boxes. There’s no really interesting behaviour patterns from the baddies, and they don’t shoot at you with interesting weapons. At best, they’re just bullet sponges. At worst, they’re nippy and annoying flying things, or melee zombie cat/dog things. Melee zombie cat/dog things that are foiled by your player standing on a high crate, or running around a box in a circle.

The game’s structure is relatively clever. There’s a star-map which unlocks new paths as you complete missions. Missions can then be repeated for more rewards. The system for improvement is neatly circular: materials and blueprints earned during the missions can be used to craft upgrades; albeit on a time delay. As you use the weapons, they level up, and as they level up, they gain points that can be spent on modifications. Those modifications are themselves earned through play, and can be combined through a process called ‘fusion’. Your warframe also levels independently, growing in statistical power, and can be modded. Lastly, your character can advance in ‘ranks’. To progress, you’ll need to enter an arena mini-game where you fight increasing waves of enemies. It’s presented as a test: and if you fail, you have to re-apply 24 hours later.

This is the stupidest mechanic I’ve seen in videogames in forever.

It feels dirty in that horrible free-to-play way: like the developers are attempting to weaponise their monetisation. And it’s not the only example: Warframe will throw gifts and bonuses at you to begin with, and encourages you to log in daily with a bonus lottery. I was surprised by just how much content is locked off from free players: many of the weapons are only available to purchase; they can’t be earned through the crafting system. There’s also no way to trial them ahead of purchase.

It is efficient: presumably thanks to the well-optimised Unreal 3 tech. On my PC (an i5 2500k, 8Gb RAM, 2 Gig Radeon 6900) it ran flawlessly on the highest detail settings at 1920×1080. For those that get motion sickness during play, Warframe includes an FOV slider (note that it doesn’t include the numerical values that show your true FOV).

It loads quickly: you can be playing in less than ten seconds, but most importantly, in two days of play, I didn’t once lose connection. Impressive, for a beta. Downloads and patching is handled either through Steam, or via a separate installer available on the Warframe site. You can buy items either via credit or debit card, or via the Steam Wallet.

What strikes me about Warframe is how it could be really fun. The design is close to how I imagine Bungie’s Destiny could and should be. But the level design let’s it down dramatically. I think it’s a great concept: I like the idea of an afternoon adventure: a half-hour romp through an abandoned spaceship. But it doesn’t follow through on its promise – you’re just as likely to spend your time lost and bored as you are to spend it rampaging through enemies.

Warframe is out now.

*Apologies: I’d believed the game was running in Unreal. It isn’t. My mistake.