In the fast-paced world of Warframe, where ninja-flipping off walls to shoot space tyrants in the head is an everyday occurrence, there’s more to your weapons than simply grinding for the next shiny magnum or missile launcher. If you aren’t in the know, unlike other loot-shooters like Destiny – where a weapon’s stats are mostly static – Warframe encourages players to optimise their guns and ‘warframes’ for their preferred playstyle by strapping on one of hundreds of mods dropped by the goons you gun down.

While it can be difficult to discern just which configuration of mods will focus your kit for each situation – pure damage versus control, for example – Digital Extremes weapons designer Joe Buck doesn’t see this as a downside. Rather, he sees it as a core part of the Warframe experience.

“Oh, yeah, we’re totally opaque,” he says. “We don’t have a lot of explanation around our game because we’re constantly moving forward and building and adjusting. To keep up the documentation and tutorialisation of everything we turn out would be way too much, and we work with our community to help refine our content once it’s out there. It is absolutely one of our strengths, because our community loves being a part of that process. We could certainly round off the corners and explain everything, but getting stuck into yet another tutorial mission when you’d rather be blasting guys is just not that fun.”

While Buck downplays his role in crafting the guns in Warframe, saying that the design comes from the artists first and foremost, he admits that it’s his job to make them fun to use. From the humble starting pistol known as the Lato, through “blade-whips”, to the sawblade-launching might of the Miter, the game’s science fantasy setting allows for some truly wild weapon choices. But what seems like a cool idea on paper doesn’t always make for the most riveting gunplay. The team just released a pistol that originally had a massive area-of-effect secondary fire that would coat foes, making them more vulnerable to the primary fire.

“It seemed really fun, but let’s be honest, Warframe is a game where most players are just going to use the highest-damage thing they can find,” Buck says. “It was similar to another weapon concept I wanted to use, which was a flamethrower where you would coat the enemies in flammable liquid with the secondary fire before roasting them. In a game with the number of enemies that we have, it was just too much setup compared to just shooting them. I have to stay aware of things like that. We also don’t ever want weapon abilities to interfere with warframe abilities, which is where some builds really shine.” 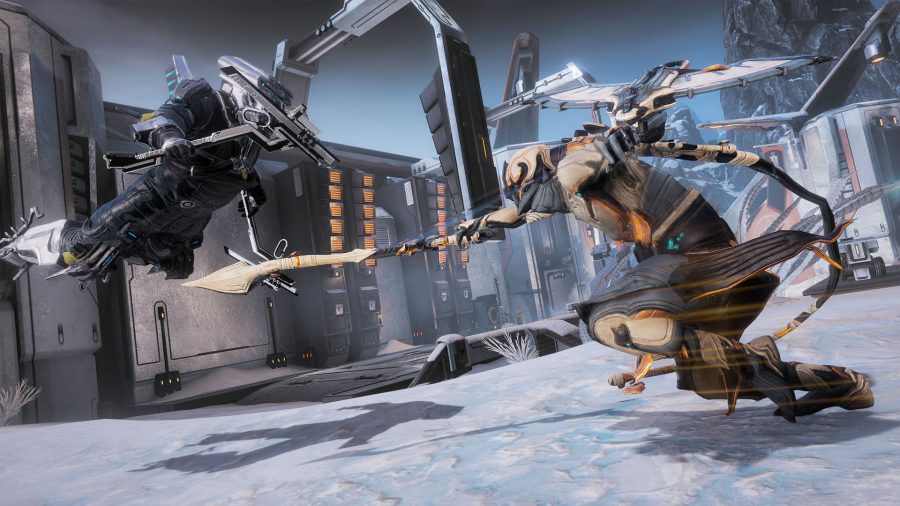 The Warframe community is known for players who obsessively min-max to figure out the optimal builds for certain situations. But the developers don’t sweat the math as much as some might think. Since Buck usually knows what mods players will assign to each type of weapon as they take it from a pea-shooter to a powerhouse, he adjusts the base damage accordingly, and the team can usually figure out what the final product is going to look like. If they don’t get it right, they know they’re going to hear it from the community,.

It’s when Buck designs some of the game’s exotic or special weapons that he feels free to play around with the concepts that seem too goofy for the game at large. Since such guns are often used to reward players who have completed somewhat obscure challenges, he tries to make them feel unique. The Azima pistol has an alt-fire that ejects the magazine, which transforms into a stationary turret, that spits out the rest of the clip in a circle. For Buck, these weapons are a chance to design something that falls outside of the usual levers he pushes and pulls to produce the game’s armoury.

Related: Take aim at the best multiplayer games on PC

“I mean, I can make the magazine bigger and the gun shoot slower, make the magazine smaller and the gun shoot faster,” Buck says. “Fast-reload, slow-reload. I can pump out a ton of variants, but there’s only so much I can do. With the exotics, I can really express my creativity, come up with ways to change the battlefield. They’re far more fun, compared to just another SMG, or another rifle.” 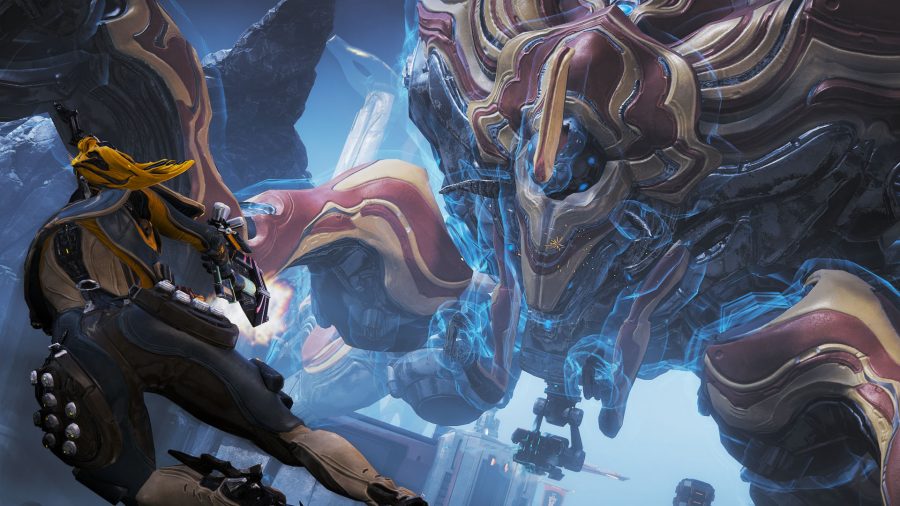 In Buck’s view, the community of Warframe is polarized between two groups: the dedicated optimisers who pump out guides for the rest of us, and the everyday gamers who just want a gun that melts alien skulls to a satisfying, fine goo. To serve that end, after he gets a gun 90% of the way to completion, he and the rest of the team spend hours upon hours scouring through Reddit, YouTube, and other social media sites to gather feedback. While all the data is useful, Buck particularly enjoys the criticism offered by “certain forums that definitely don’t know a dev’s watching”. He and the rest of the team make adjustments when they agree with them – such as those made for a beam pistol called the Ocucor following a community outcry.

Despite cranking out weapons for Warframe since its first launch in 2013, Buck still displays an almost heartwarming enthusiasm for putting together space-age weaponry, cherishing the creative freedom that comes with the sci-fi milieu. For an upcoming warframe, he says that a certain heavy weapon was inspired by the fat, coiling laser in the final fight scene of classic Stallone film Demolition Man. “The effects guys really knocked it out of the park,” he says. “I told them exactly what I wanted, and they made it happen.

“I’ve been here for ten years, and it’s never felt like work,” he adds. “I really love my job.”