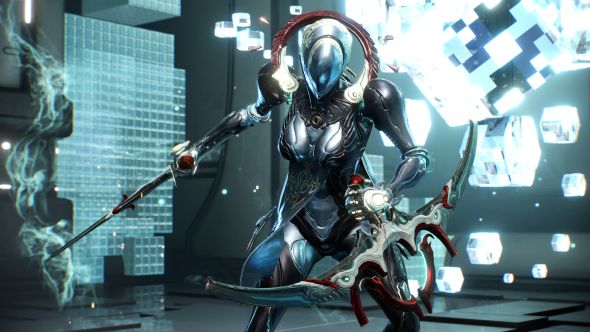 In a press release issued this afternoon, Digital Extremes have announced that Warframe’s new free-to-play expansion is out today. Plains of Eidolon takes the game open-world, adding new challenges for veteran players to contend with.

Here’s what Plains of Eidolon’s open-world means for Warframe’s future.

Update, October 5:Plains of Eidolon will release on Steam some time next week

Digital Extremes are releasing their free-to-play expansion to Warframe on PC next week. Plains of Eidolon is a more open take on the game, aiming to give new players a leg-up in the game while adding brand new challenges for veterans.

Plains of Eidolon brings a day/night cycle to Warframe for the first time. During the day, the expansion will offer a wide variety of new vendors, and explore the titular plains either on their own, or in groups of up to four. By night, however, those same plains are haunted by enormous new monsters. Sentients are huge, threatening everything in their path, and it sounds as though you’ll need to work closely with your team to take them down.

The trailer for Plains of Eidolon, which you can see above, shows off the plains, which allow you to explore, fight new monsters, and even fish, no matter what level you are. Towards the end of the trailer, however, a Sentient appears, towering over players and packing some significant firepower.

As well as the Sentients, Plains of Eidolon brings a new character to the game – Gara is a new warrior who attacks enemies by manipulating glass, using an enormous glass blade. There are also three new weapons, new reinforcements, and tweaks to the game’s skill tree.

Digital Extremes haven’t announced a full release date for PC, but from what they’ve said, expect it to arrive towards the end of next week. It’ll arrive on Xbox One and Playstation 4 in November.

Original story, October 4:The last trailerfor Warframe’s coming Plains of Eidolon update gave a vague launch date of sometime this autumn, but a new forum post by the devs says the goal is to launch in the next ten days.

In the words of Rebecca Ford, community producer at developers Digital Extremes:

“The goal is to launch within the next 10 days – when the official Hub site launches there will be more information there. Are we there yet? Almost!”

Plains of Eidolon will add the titular plains – an expansive, open area – to the co-op action game, and Ford’s update includes a map. As you can see, it’s pretty vast, and will mark a bold new step for a game that’s been more confined so far.

The Plains of Eidolon was the site of a battle in the Old War between the Orokin and the Sentients, whose skeletal remains still litter the area. Other landmarks include the hub town of Cetus, whose scavenger inhabitants, the Ostrons, you’ll assist against the hostile Grineer.