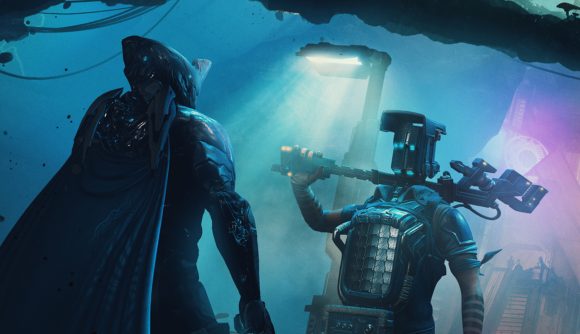 Warframe’s Fortuna expansion is set to launch this month, and Digital Extremes has stoked the fires of anticipation with Solaris United – an ARG that’s offering a roundabout path to fresh lore and new in-game items. The event is running principally through Discord, and helps to tell the story of the titular rebel group, which will be the main player-allied faction in Fortuna.

It began with the official Warframe Twitter reaching out to various content creators, sending tweets with corrupted text and following up with private messages leading to a “secret” Discord server. There, the server regularly posts new invite codes, each of which “self-destructs” after a limited time. Tens of thousands of Warframe fans have joined up since the event launched on October 22.

From there, we got a video message from The Business, a mysterious figure working from inside a Corpus facility while recruiting “Outworlders” (that’s you) for Solaris United. New transmissions regularly hit the Discord server, and most recently The Business has begun responding to players’ use of emoji responses.

Business asks “What do we all do together?” The community responds by spelling out L-I-F-T, a reference to the LiftTogether hashtag that’s gotten so popular even Arby’s is in on it. “Where on Earth are you from, Outworlders?” That one gets a variety of international flags, and a further spelled-out message message: Y-U-R-M-O-M. (You can probably decipher that one yourself.)

Official comms regularly come in as players progress in the ARG. One of the most substantial steps so far has been a transmission riddle. As detailed on Reddit, that required players to read spectographs of a sound file, translate to an obscure encryption format, and convert the numbers to letters and numbers making up a Bitly address that led to the next step of the game.

In practical terms, you’re getting stuff out of all this. With each new step of the ARG, new items are unlocked in cache transmissions, though it seems they’ll only be distributed to players once the whole event is complete.

If you’re not yet in the Discord, this official forum thread is probably your best bet to catch up on the details, and to find the most recent invite link. The Warframe Fortuna release date is early in November, and you can follow that link for details on what to expect from the free expansion. In the meantime, you’ve got a lot of ARG to catch up on.