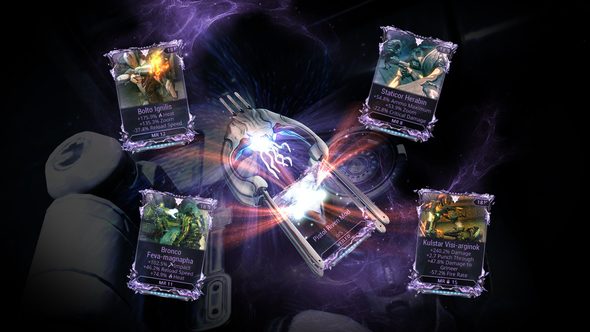 Developers Digital Extremes have revealed Warframe’s latest update – Shrine of the Eidolon – will make big changes to the current mod system, allowing you to recycle old mods into new ones.

Get in on the action. Play Warframe for free.

Mods are essentially Warframe’s upgrade system, allowing you to upgrade your gear. The mods come in the form of cards which can be applied to the Warframes themselves, as well as weapons, sentinels, Kubrows, and Archwings to enhance everything from damage and power to speed and utility.

Though mods can be traded among players, it’s often the case that veterans end up with a pile of unwanted duplicate mods or upgrades they don’t plan on using. This is particularly true for Riven mods, which are unique in that their stats are heavily randomized. This means they’re effectiveness can vary dramatically.

To combat this, the developers are introducing the Riven Transmuter which, when combined with four unwanted Riven mods, will create a brand new Riven mod. Combining four Rivens of the same type will result in a transmuted Riven of that type. The new item is dropped by two new Eidolons, being introduced in this update – the Gantulyst and the Hydrolyst.

“Players have been playing for a year now and they’ve collected a lot of these mods and they can’t really do anything with the ones they’re never going to use,” Warframe live opps and community director Rebecca Ford explains. “Of course they can trade them, which is how our free-to-play model works quite favourably, that someone else might want one of these mods. But what these sentients drop are ways for you to use those mods and turn them into another mod. So essentially, it’s given the upgrade, we call it the ribbon upgrade system, a whole new way to, essentially reduce, reuse and recycle.”

You can currently transmute old mods into a new one. However, transmuting four Riven mods only gives a “chance” of creating a new Riven mod. The Riven Transmuter guarantees you will get a brand new Riven mod.

“It’s a way to take the mods that you might not use, because you don’t want that weapon, and you can recycle them or, what we call them, transmute,” Ford continues. “You can transmute it into a new one that you can only do when you get the drops from these enemies, and it’s a four to one ratio. So if you have four mods you don’t like, pop them in with this new item that drops from the Eidolons and you can turn it into one brand new one.”