Wargroove is, in no uncertain terms, the Advance Wars of 2018. It’s a comparison that developers Chucklefish make no effort to push out of the spotlight, embracing it with an enthusiasm that reveals just how much they love the turn-based strategy classic.

“Advance Wars is just really fun,” Rodrigo Monteiro, technical director of Wargroove, says while demoing the game at EGX Rezzed. “It’s friendly. It has this accessible feeling to it, and we felt it’s been a long time since anyone made a game like that.”

It’s safe to say that, when Wargroove releases later this year, the friendly strategy drought will finally be over. This is a game that bursts with personality; it values strategic thinking, but also offers something more fun than fiddly micromanagement of platoons. There’s a simple harmony to how its units and buildings work together, which allows for tactical dots to be easily connected, and strategies effectively deployed.

For anyone unfamiliar with the popular Game Boy Advance series, Advance Wars is to turn-based strategy what Pokemon is to JRPGs: a distillation of the genre to its very base components, which ensures simple, clean gameplay mechanics. Wargroove follows in these turn-based footsteps, removing the faff from a genre that has hoarded too many superfluous ideas over the years. Here, you take turns with your opponent to move units across the map, capturing buildings and defeating enemies in quick-fire combat phases. It’s a lot like board games, or at least how board games were before we complicated them with booster cards and expansion mechanics. 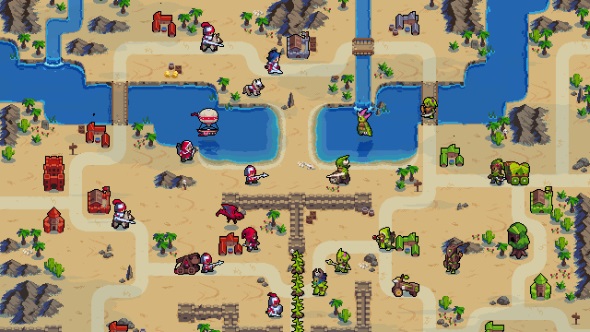 With this design approach in mind, it’s easy to understand the synergies that each of your warriors offer. “Different units have different critical powers,” Monteiro explains. “They have special rules that, if fulfilled, will do extra damage. So, for example, when two spearmen are near each other they do extra damage.”

“You can build spearmen walls and they’re much more effective,” Tom Katkus, product manager at Chucklefish, adds. “All the units have something like this. There’s an extra layer of strategy you can have, thinking about how your units are placed relative to their environment modifies their behaviour.”

From a barracks you can produce an array of units: spearmen, alchemists, archers, paladins, and even the adorably named doggos (“At first it was a placeholder, but now everyone would be so angry if we removed it,” Katkus says), each with their own strengths and weaknesses. This leans into the classic rock-paper-scissors strategy mould, but critical powers and positioning help add a little depth. For example, buildings can sacrifice strength to buff nearby units, although such an action could lead to disaster should a siege break out the following turn. 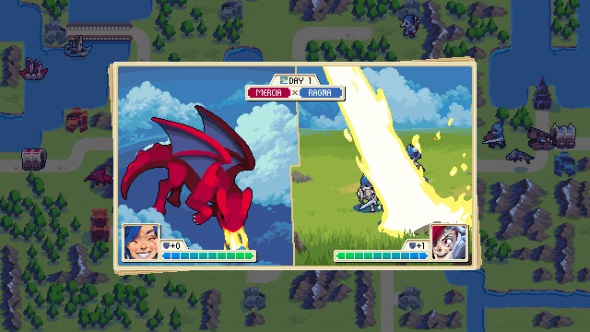 While these units act as the skeleton and many limbs of your army, the head of your force is your commander. The demo build available at Rezzed had four available to choose from, each with a special ‘Groove’ ability: Mercia, a healing paladin-style hero; Ragna, who can leap across distances into battle; Valder, a necromancer who can summon skeletal warriors; and Greenfinger, a tree-like being able to erect walls of impenetrable vines.

Your commander’s Groove ability is “very powerful, so they can swing the battle,” Monteiro says. Turn by turn your commander’s groover meter will build, and when ready it’s up to you to decide when the perfect time to unleash it it.

“It’s very much a sub-strategy where you put your commander and how you use them,” Katkus explains. “Because they’re so powerful, you’re putting yourself at a huge disadvantage keeping them back. But if you put them in a vulnerable position you could basically lose in one turn. So it’s a real trade-off.”

Yes, losing your commander is an instant failstate, so you’ll want to manoeuvre them carefully and keep them well defended. Not too well defended, though, as you’ll need to reserve some troops for the defence of your headquarters, which is also a one-way ticket to defeat should it be destroyed. And, of course, you need units that can explore the overworld map, capture buildings, and grind the enemy down. The mechanics behind this are all kept simple but the strategic thinking the game demands from you keeps it complex. 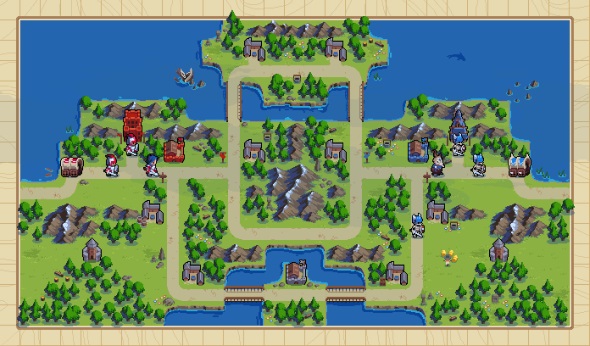 If this style of play reminds you too much of Advance Wars, Chucklefish do have a card to play that will help distinguish Wargroove from its peers: a map editor. “The biggest difference [between us and Advance Wars] is the editor,” Katkus says. “That’s a really new-to-the-genre thing that we’re hoping is going to create a ton of community-built content.”

“Modding wasn’t an afterthought for us,” he explains. “It wasn’t thrown in at the end. We developed these tools and we’re building the game with them. We basically made our dev tools front-facing.”

“Because of that we made sure the tools are as fun to use as the game is to play,” Monteiro adds. “So it’s not this crazy Windows-95-looking thing full of obscure objects. It feels like the game.”

Because the modding tools are the same as those used to build the game itself, there’s an impressive level of flexibility to them. You don’t ‘even need to make traditional Wargroove levels. “[Players] can implement custom events, and custom win and lose conditions,” Monterio says. “So a custom map doesn’t have to be kill all enemy units, it could be like an RPG-like map.” He explains the potential path of an RPG map being “go here, talk to this person, get this part, bring it to this person, and then you win the mission,” which is most certainly a world away from the turn-based strategy traditions that Wargroove’s campaign abides by.

There’s already a lot of buzz around Wargroove, and in part that will be down to a large collective of Advance Wars fan shivering in excitement at the prospect of playing something with an almost identical style and gameplay approach. But even if your hands weren’t glued to a Game Boy Advance in 2001, there’s plenty to love here: this is turn-based strategy in a pure, unmuddied form.