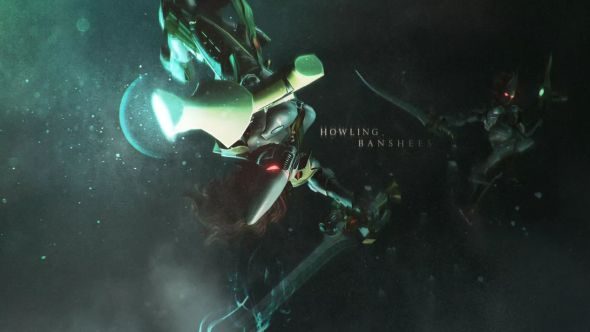 Update October 14, 2016: The Howling Banshees have been revealed and are ready to tear into enemies are close range.

More Eldar unit additions to the cast of Dawn of War 3 have arrived.

Rule over more stuff in our list of the best strategy games.

Howling Banshees are the slightly-terrifying melee specialists of the Eldar, making their return from Dawn of Wars past in an all-new, crowd-controlling, sword-murdering form. Their abilities are:

They’re designed to be used in packs, and are fragile and easily killed on their own. With some covering fire letting them get into melee, or just having enough of them to swamp over smaller forces, they’ll quickly decimate an opponent. Like many Eldar units, once their battle focus starts to run out they’re in big trouble, so it’s important to use hit and runs rather than lock them in a slog. Ranged fire comes in handy here too.

Update September 29, 2016:Sega have revealed more information about the Eldars or, more specifically, one massive Eldar unit called the Wraithknight.

Created from Eldar wraithbone, this unit may be a towering behemoth but it’s still agile on the battlefield, able to get out of close combat and to a safe distance in an instant.

Best suited to ranged combat, the Wraithknight houses two heavy cannons and is fitted with a jump that allows it to get back into a more comfortable range when things heat up. It can also attack with a focused beam and a distortion rift that is capable of reducing enemy mobility – ideal for helping allied units line up and deploy powerful, slow-fire abilities.

Like all Eldar units, the Wraithknight runs off Battle Focus and will go down easily once that focus is depleted. These towering units can also be tied up by melee units, so careful timing of the jump ability is key to keeping it in the fight.

Here are the Wraithknight’s abilities:

And here’s a 3D model of the thing:

Original Story September 23, 2016: Dawn of War 3 officially unveils the Eldar, a playable faction from an ancient race that used to control the entire galaxy, thanks to their sophisticated tech and psychic powers.

The Eldar consider other species to be below them, seeing humans as a blight on the galaxy. In battle, they use hit-and-run tactics, operating grav tanks and jetbikes in their guerilla ‘Swordwind’ army formations.

Use of Webway portals grants them unrivalled mobility, letting them relocate their forces in an instant. These portals also project a large aura that grants a speed boost to all Eldar units, just in case they weren’t mobile enough.

The Eldar super-ability is Eldritch Storm, a massive tempest of psychic power that slows all enemies within and then strikes smaller areas with powerful lightning blasts.

As for their unique units, Farseer Macha is an Eldar with high-tier psychic powers and the ability to see rather far – into the future, in fact. In gameplay terms, she’s a support caster who can deal long range damage, melee damage and buff her allies.

Wraithknight Taldeer is another unique unit, this time specialising in cutting foes down with an oversized blade. Taldeer’s primary function is causing disarray, rushing into enemy ranks and disrupting their formation by making them dead. 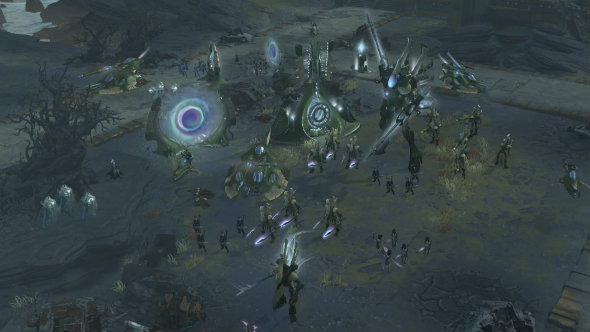