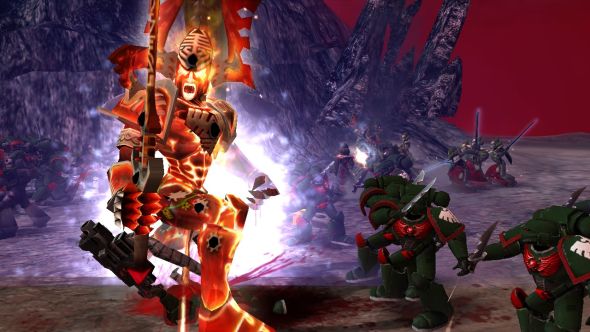 If you bought a boxed copy of the original Warhammer 40,000: Dawn of War, Sega will give you a Steam key for the game for free.

The original Dawn of War made our list of the best strategy games on PC.

The offer was announced on the Dawn of War III forums, and does stipulate that Sega “may need to verify your boxed copies and this may involve them requesting photos of your box or other information.” Here’s the link to follow if you’d like to submit a request.

The original Dawn of War launched way back in 2004 and was one of the (relatively few) genuinely good Warhammer videogames, offering large-scale slaughter in a faithful version of the grimdark 40K universe.

The forthcoming Dawn of War III promises to blend this approach with the more divisive character-led style of the franchise’s second instalment. It will also add towering new super units to the mix, such as the Imperial Knights and Eldar Wraithlords.

It remains much loved, with a 93% positive rating on Steam. If you’d like to play this RTS classic, its Game of the Year edition would usually cost you £9.99, but it’s currently half price.

Dawn of War III is due for release sometime next year. If you’re thirsty for more news, here’s everything we know about Dawn of War 3 right now.