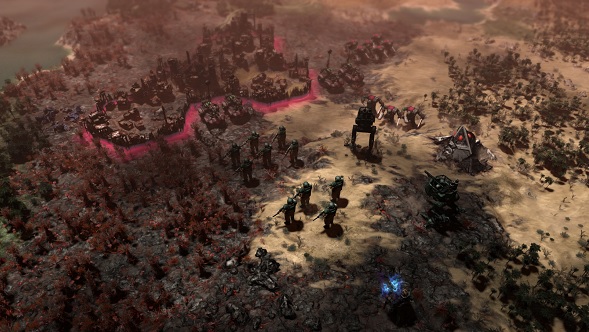 Explore, expand, exploit, exterminate? Now that’s a modus operandi Warhammer 40k’s Imperium of Man can wholeheartedly support. However, there’s not much potential for 4X gaming in the grim darkness of the far future; the scale is too vast, and not many factions are interested in that whole ‘research’ or ‘diplomacy’ thing. Still, Warhammer 40,000: Gladius – Relics of War gives it the ol’ college try.

Gladius, if you don’t know, was a newly civilised Imperial world, and home to a Chapter of Space Marines. A huge Ork invasion wouldn’t have been enough to destroy it… except that it was followed by a catastrophic warp storm that seriously wrecked the surface. Once the storm died out, human, Ork, and Space Marine survivors resurfaced to reclaim the world – and so did the Necrons that had spent aeons slumbering deep underground.

Have you played all the best 4X games on PC?

Those are the four factions you can play in Gladius – Relics of War: Space Marines, Imperial Guard (well, Astra Militarum), Orks, and Necrons. However, a custom campaign allows you to mix and match them as you please, which means you can, in fact, have nothing but Space Marines vying for control of Gladius if you wish. What will affect your decision, however, is that each faction has its own perks and challenges to consider. For example, Space Marines only have one city, while Orks gain Influence by fighting.

If you’re a Civilization player then the rest is mostly standard fare: your units explore the map, you find resources that need extracting, you fight. The exception is that unit stats are a bit more involved than in a regular Sid Meier title, with armour ratings, initiative, range, and movement all playing a part in the fight.

The variety of units in Gladius – Relics of War is one of its strengths as it provides a welcome change from the usual 4X lineup. That said, a unit is armed with uniform guns, so it’s strange that Primaris Space Marines don’t take front and centre in the game. Another point of note: as a unit gets damaged and loses members, the damage output decreases. So the number of soldiers is more than just an illustration of the HP bar.

Adding to that, units have a morale rating, so you can lose their trust in the fight if you’re not careful – of course, Space Marines know no fear, so they usually die before they lose faith. I suspect morale will play a larger role in other races, in particular the cowardly greenskins – the build I’m playing only allows me to play as the Space Marines. 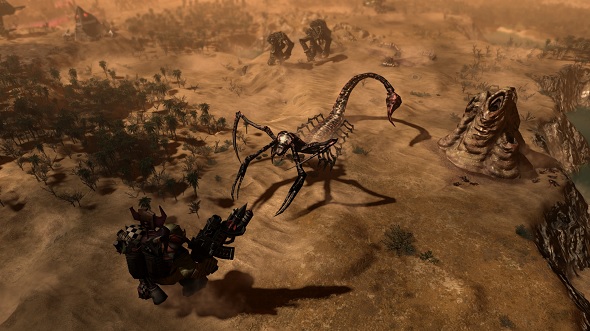 These tweaks mean you must consider the state of your unit when entering combat. It’s an odd injection of humanity given that these are battle-hardened military men that don’t know the meaning of sympathy, but it does delay your mouse click at crucial moments, and for that it strikes me as a clever touch.

Where Gladius – Relics of War could do with a significant improvement is the visuals. Stylisation does wonders for the Civ series, and it would work well here, too. Still, this is the best 40k game in the 4X style since Rites of War. Unfortunately, that’s not saying as much as it may seem, given that such the comparison is with a game that was released in 1999.