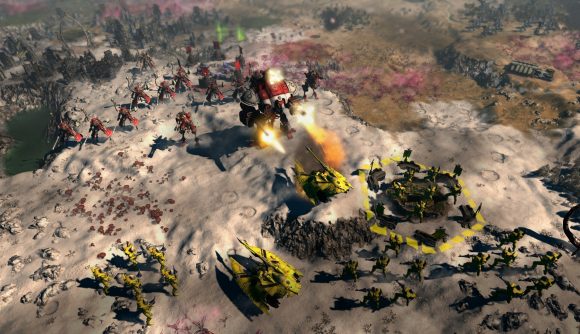 If you somehow haven’t encountered it yet, Gladius: Relics of War is a 4X game set in Games Workshop’s iconic Warhammer 40K setting. It’s basically the warp-spawn child of Civilization and Warhammer games, and it’s about to get a new DLC pack in a couple of weeks.

Gladius: Relics of War has been trucking along nicely since it was released back in 2018, with expansions introducing new races to the thunderdome of Gladius Prime. Now, it’s the Adeptus Mechanicus’s turn. This is a sub-faction of the wider Imperium of Man, tasked with maintaing the war machines of the Space Marines and Astra Militarum. They are also a law unto themseves, worshipping their own private deity who is supposed to be the Emperor, but is probably a C’Tan, or something.

The Adeptus Mechanicus will bring an army focused on augmented soldiers and giant war machines, including everyone’s favourite Titan-class units. They also come with bonuses to production, and can temporarily enhance their units and buildings, but they’re also kind of bonkers and slaves to the past, so research costs are increased.

The faction will come with 17 new units in total and will have its own bespoke campaign path to follow, just like every other faction in the strategy game.

Warhammer 40,000: Gladius – Adeptus Mechanicus will be released on November 22, 2021 on PC via Steam and the Slitherine store.