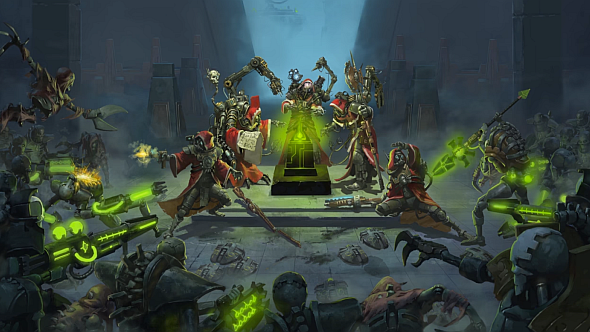 The Necrons will be your enemy in Warhammer 40,000: Mechanicus.

Develop your strategic thinking with the best strategy games on PC.

It’s an exciting choice given that Necrons have been under-explored in 40K videogames so far, and are cool as all hell. It’s also very appropriate for a game centred on the technology-obsessed Adeptus Mechanicus: the Necrons were created when, craving immortality, an ancient alien race transferred their minds into bodies made of living metal. The Mechanicus have a similar admiration for metal’s enduring properties – as you can hear in the game’s teaser trailer below – so in many ways, the Necrons are their dark mirror.

Familiar Necron units from the tabletop game will make an appearance, with Immortals, Flayed Ones, and Canoptek Scarabs all confirmed so far alongside the vanilla Necron Warrior. Developers Bulwark Studios are also teasing many more to be revealed in the coming weeks, and “some big surprises” are in store.

The Necron announce trailer also gives us a brief glimpse of gameplay. So far it’s classic XCOM-style squad tactics, with tiles, overlays, and ghostly outlines to indicate movement ranges and ability effects, though personally I think the levels are looking a little bare. Incidentally, I’m pretty sure that’s a Necron Lord at 19 seconds, lighting up part of a tomb.

For more on Mechanicus, you can check out the Steam page or the website.