We’ve all got a game in us; a creation we’ve mentally put together over months or years that we’re convinced would be the perfect addition to our Steam library.Well I’ve got an idea for a Warhammer 40k game, and I think it would be brilliant. A combination of Dawn of War, XCOM, and League of Legends: it’s the videogame representation that Games Workshop’s hobby deserves.

My ideal Warhammer 40k game is free-to-play. Woah – don’t leave yet! I know those words strike fear and disgust into many, but the best hobby games are all free-to-play. Hearthstone, Dota 2, League of Legends; they’re all about collecting things and using what you have to achieve victory. That’s exactly what Warhammer is. And it’d be nice to have a F2P game that wasn’t a MOBA, CCG, or MMO, wouldn’t it?

The basic premise is this: every player gets a starting squad of soldiers for each of the game’s races – Space Marines, Orks, Eldar, et al – provided for free. They are used to engage in the main combat section of the game, which essentially takes XCOM’s combat as a template. Randomly generated maps are host to turn-based multiplayer battles. Units are moved on a grid formation, and have the option to shoot or use a skill each turn. Participating in battles earns you currency, which is then used to purchase new units. 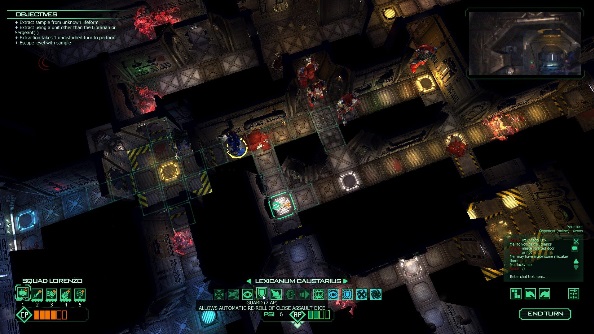 Like League of Legends, you’ll begin to amass a collection of characters by spending cash or in-game currency in the store. The more you play, the more units you can buy, and your army gradually grows. Like the tabletop hobby, some players will discover what army they enjoy the most and focus on them, while others may prefer to build smaller forces of numerous armies. Of course, the really dedicated player will be able to spend real cash in the store on tanks, hero figures, and additional squads to field in battle. The idea here is to replicate the excitement of buying new models. There’s something about a transaction – be that with real cash or otherwise – that can’t be replicated by simply grinding up a tech tree.

The key fear in a lot of free-to-play games is the idea of being able to buy your way to victory. Pay-to-win ruins otherwise perfectly fine games, especially when it comes to things like shooters that offer absurd overpowered assault rifles for five dollars. It’s a problem that the Warhammer 40k tabletop game also has when you think about it. What stops a player decimating another by simply going out and spending £70 on the biggest tank available? The answer is the points system.

The points system would be the game’s equivalent to Hearthstone’s ladder, but arguably even fairer. If you only have the starter squad, you enter a 100 point battle, meaning your opponent can only field units equivalent to you. If you’ve gone out and bought yourself an army, you can go into a 1000 point game, or any of the point categories below, selecting the right combinations of troops for the category you’re in. This gives you a tremendous amount of choice over the kind of game you can play. Do you want a quick, tight tactical shootout to fill your lunch break with? Just field a single squad in a low-points match. Looking to spend an evening bombarding the enemy with artillery and outflanking them with teams? A big thousand-point match will serve you perfectly. 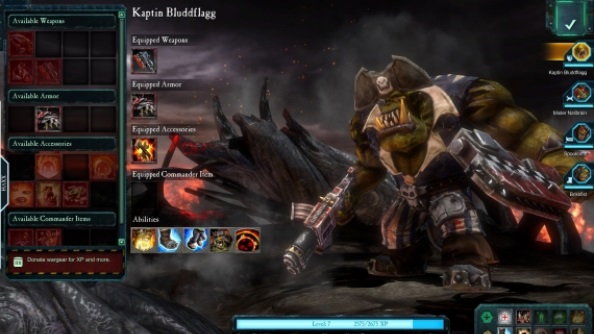 Despite the points system keeping things fair competitively, it’s important to make sure progression can happen without the need to plough money into the game. That’s why every unit would have its own skill tree. A standard Space Marine tactical squad, for example, if used frequently could level up to equip a flamer or a missile launcher, add a sergeant with a chainsword to the squad, or unlock some skills to use in battle. This allows progression and achievement for players in between purchases.

Further adding to the hobby feel, it’s mandatory that the game has an army painter, where your units can be customised with colours. The whole idea is to replicate all aspects of Warhammer, not just the lore and people exploding, so something from the craft side of the game is essential.

The sheer breadth of units available to choose from means it would be a game easy to expand upon with expansions and updates: be this an entire new race, or starting small in scope and gradually adding new units at regular intervals. A Hearthstone-style adventure mode would be great for seasonal content, with special campaign maps featuring narrative objectives and loot rewards for completing them. 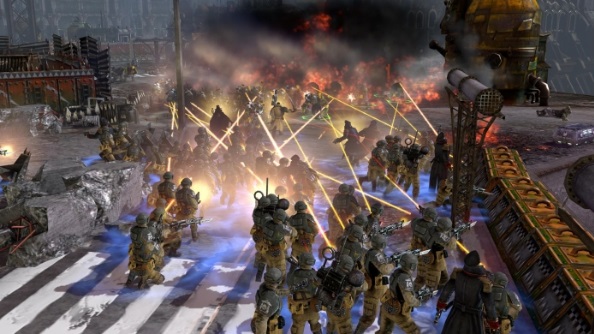 It’s not the sort of thing that’s going to have an ever-evolving meta that has a million players attempting to find that one killer army set up, or people collaborating on strategies for OP units that need to somehow be defeated. But it does have the potential to be an engrossing, long-term hobby game. As gamers we all seem to have an inherent need to collect things, be that Steam titles, Hearthstone cards, or MOBA champion skins. A free-to-play Warhammer 40k game provides that, without any of the randomness of Hearthstone’s card packs, or the mere cosmetic value of a MOBA skin.

And everyone likes setting fire to orks with overly-decorated tanks, right?

That’s my take on a great Warhammer game. But like I said earlier, we’ve all got a great game in us. What is your ideal Warhammer game? Or non-Warhammer game, for that matter? Take your best ideas and scribble them down in the comments.