Warhammer 40k: Chaos Gate – Daemonhunters finds the turn-based tactics genre at a weird point in its history. In the time between the original X-COM game back in 1994 and XCOM 2 in 2016, there wasn’t that much evolution beyond the graphics and incremental but vital improvements that made the inherent artifice of taking turns to shoot at each other as flowing and naturalistic as possible. Now, another six years on, my hands-on with Warhammer 40,000: Chaos Gate – Daemonhunters shows not only how hard it is to build upon a formula that may well have already been optimised, but also that there’s plenty of fun to be had within those familiar trappings.

Daemonhunters is technically a follow-up to 1998’s Warhammer 40,000: Chaos Gate – one of the best strategy games to jump on the original X-COM’s mechanical bandwagon way back in the day. But even though Daemonhunters’ lineage is traceable to the very roots of the genre, this Warhammer 40K game isn’t afraid to fool around a bit.

The aesthetic, for instance, follows a recent trend in Warhammer games like Shootas, Blood & Teef and even Total War: Warhammer 3 to imbue the quintessential grimdark setting with a bit of colour. Skies blaze with base reds and neon purples, ice maps have a clean cerulean hue, while the putrid lair of Aeger the Benevolent, a Nurgle warlord, oozes with toxic greens and gut-pinks. And the ruined cathedrals on these battlegrounds still somehow have their boldly coloured stained-glass windows intact at the start of each battle (though you can see to those fairly quickly).

On the note of smashing stuff up, the environments are there to be desecrated. Beyond the obligatory explosive barrels, you can take out reactors spanning several hexes, crash through windows, blow up bridges, and topple pillars to crush entire squads of enemies (or put a modest dent in the massive health bar of a boss like Aeger). 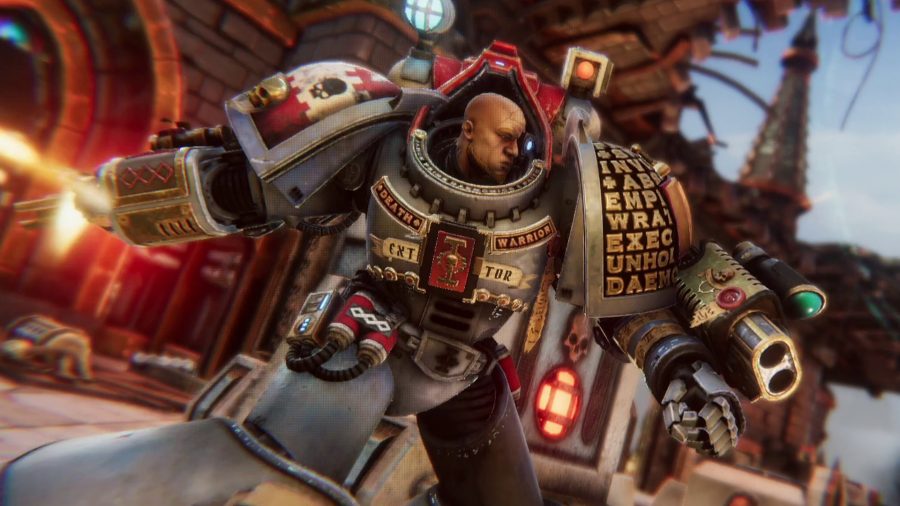 At one point, I lob a grenade to perfectly wipe out an enemy squad, but the explosion blows open a large section of wall, providing a shortcut through to the next area. This collateral damage works in my favour this time, but it can also bring wandering patrols from the next area streaming into my current skirmish. The destruction adds a welcome layer of unpredictability to a genre that can often be a little rigid in its rulesets.

There are some cinematic and stylistic flourishes too. My Marines daintily jump over single-hex gaps to cross them, and the unhinged use of slow-mo, which kicks in whenever you smash through a door or chuck a grenade with the word ‘DOOM’ inscribed into it, is a lovely throwback to the hyper stylish action movies of the early 2000s. It’s all so joyously campy, which distinguishes Daemonhunters from the austere feel of many other Games Workshop tie-ins.

The Space Marine chapter under your command are the Grey Knights, who have the messy task of keeping the cosmic variant of Chaos at bay. The bad guys here are the hippest Games Workshop Chaos faction of the moment, Nurgle: plague-peddling, pustulence-partying worshippers of decay who are infecting planets with some kind of spore matter called Bloom. Each turn, the Bloom level on a mission increases, and when it fills up it spreads throughout the level and grants enemies various buffs. With Nurgle’s cheery disposition and apparent joy even as they go to their deaths, they’re the perfect antagonists for the tone Daemonhunters is going for. 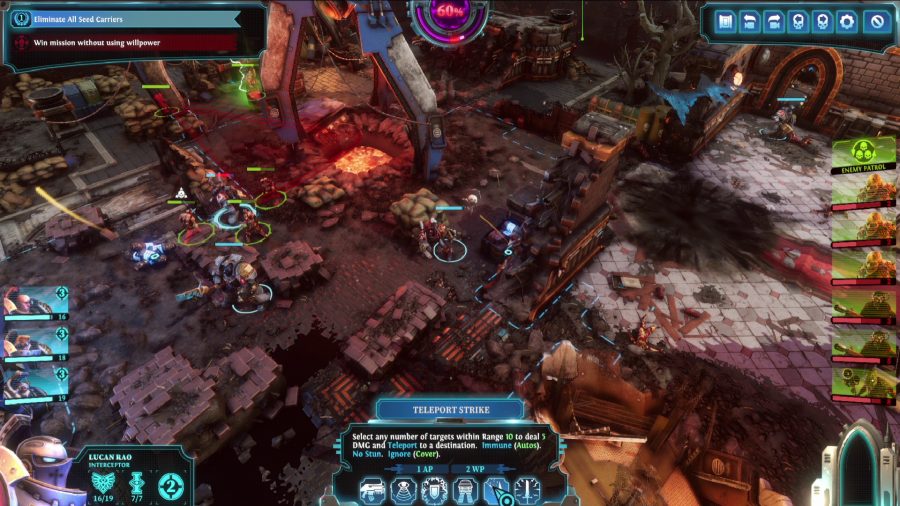 Turn-based tactics vets will quickly settle into a groove with the mechanics. There are the traditional systems like full and partial cover, setting up overwatch, and allocating action points between movement, abilities, and attacks as you see fit. And then there are additions like Will Points (WP), which each Knight has a limited amount of. The lumbering Justicar, for instance, can use WP to knock back all enemies within two hexes of him, while the Interceptor has the ability to teleport, and for 2 WP can teleport-strike several enemies within a 10-hex range.

Once you get into the action, the battlefield becomes a vibrant splattering of bouncing body parts

The steel-clad Space Marines, with their Chainswords and Power Fists, have always excelled in close-range combat, especially when facing squidgy foes like Nurgle. Daemonhunters celebrates their melee prowess with a Fallout-style precision targeting system, which lets you lop off an enemy’s arm to (quite literally) disarm or stun them by targeting their head.

Limbs come away from enemies with ease, though the finishing ‘Execution’ moves are surprisingly uninspired; we want to see Nurgle being sawn in half with ribbons of viscera spilling out, not an enemy weightlessly bouncing away like a party balloon swatted by a child. 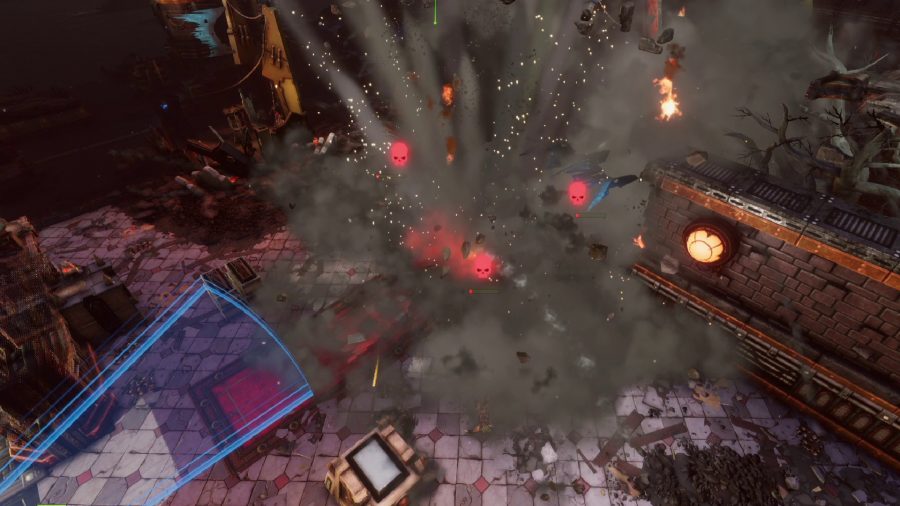 Daemonhunters does have some pacing problems to iron out too. Two of the three missions I play are needlessly sprawling, and I spend multiple turns using all of my AP just to run across the level. There’s no way to speed up movement, skip animations, or start planning the moves for my next unit while the previous one is still in motion. A few toggles and dials to expedite the waiting could save Daemonhunters from slipping into that common genre pitfall in which missions are filled with too much dead time.

But once you get to the action, things really pick up, with the battlefield becoming a vibrant splattering of Bloom, fire, rubble, and bouncy body parts. Of course, you could describe Daemonhunters as ‘Warhammer 40K-but-XCOM,’ (especially with the whole base management part of the game that I didn’t get to play with in the preview), but it breaks away from both those universe’s po-faced stylings to offer something a bit more zany and pulpy than you’d expect. And a little self-awareness is always a good thing.