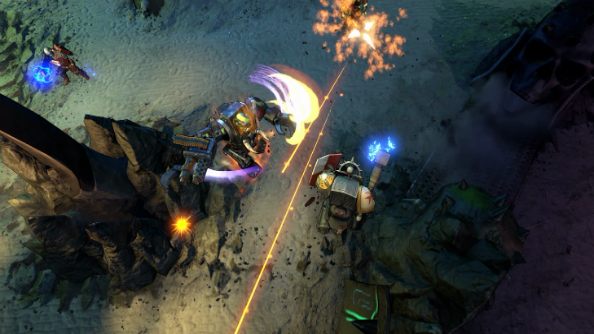 Attention fans of Orks and Space Marines – Warhammer 40,000 Dark Nexus Arena is headed to Steam Early Access on December 9th. And to swiftly paraphrase a picnic basket-stealing grizzly, this is smarter than your average MOBA.

My sci-fi sense if tingling. Here, go and scope out the best PC space games.

Well, perhaps ‘smarter’ isn’t exactly the right term. But there’s no denying Dark Nexus Arena certainly spits in the face of genre convention. Thanks to its unique control scheme, this addition to the Warhammer 40K cannon can be considered a sort of MOBA/shooter hybrid, as developer Whitebox Interactive explain:

“A skill shot-based control scheme is at the core of Dark Nexus Arena, making the game feel like a shooter, while still providing the depth and character progression of a MOBA. With the ability to dash out of harm’s way and take cover behind walls and other characters, players will have an unprecedented level of control over their characters in Dark Nexus Arena.”

In line with these more free-from controls, Dark Nexus Arena also jettisons the traditional three lane design staple of many MOBAs, with maps that nix lanes and towers. Whitebox claim the result makes for “a more open battlefield that fits more in line with Warhammer 40,000’s lore.” Said fields of battle take place in the Dark Eldar capital city of Commorragh. Probably not the best place to visit for your summer holidays, methinks.

To further cement its reputation as the bad boy MOBA with the comb tucked into its sleeve and the slicked back quiff, Dark Nexus Arena is also free from bases. Without a safe haven to return to, players are forced to use support characters to top up their HP when the going gets murderous.

The game has been in beta since May, so here’s hoping it’s in a pretty polished state when it launches on Steam in December.